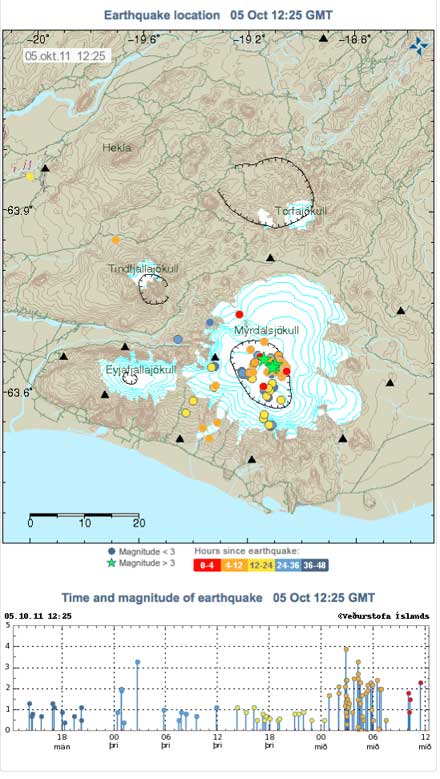 The earthquake swarm at Katla on Oct. 5 (mostly the orange circles on the lower plot, centered around the green stars on the map). Data and images from the Icelandic Meteorological Office.

We’ve been keeping an eye on Iceland’s Katla for quite a while now and over the past year; the volcano has been showing signs that magma is moving under the ice-capped edifice. There have been frequent seismic swarms around and within the caldera that is currently filled with the Mýrdalsjökull (glacier) and on at least two occasions, small glacial outburst floods (jokulhlaups) have issued from Katla. Part of the Mýrdalsjökull ice cap was seen as partially melted after each of these floods, which suggests that the area was at least getting hot — now, whether that meant an eruption (a very small one) or merely vigorous hydrothermal venting is still unclear. What is clear is that something is happening under Katla.

Last night, Jon Frimann noted that a new earthquake swarm picked up along a linear feature under Katla. So far, there is no indication if a new eruption or flood, but it does show that things are still very active under the ice at Katla. Jon noted that so far, there is no sign of harmonic tremor, the usual harbinger that magma is moving and an eruption might be in the cards and when I checked this morning on the Icelandic Meteorological Office page, it looked like the swarm was over, with a total of a few dozen small (<M4, most <M3) earthquakes between 00:00 and 06:00 (GMT). Most of the earthquakes were between 1-5 kilometers in depth, so likely this was an emplacement of magma beneath the caldera — the question would be if that magma is eruptible or merely an intrusion at depth, a very common occurrence in a volcanically active terrane like Iceland. However, any activity is well worth noting as other volcanoes in Iceland have seen similar patterns of earthquake swarms for months to years before an eventual eruption, so Katla will be watched closely.

If and when Katla has its next eruption or you just want to see what is going on now, you can check out the new Mila.is webcam for the volcano.

UPDATE 9 PM EDT: Thanks to Eruptions reader D. who noticed that I had the depths of the earthquakes wrong – they weren’t 7-9 km down, but rather 0.1-5 km (mostly, with some error for confidence of the solution). This really doesn’t change the conclusions, but magma might be closer to the surface.

Read 3216 times
Published in News Technologique-Tech News
More in this category: « Nissan Builds a Post-Fukushima Neighborhood Around the Leaf Steve Jobs est mort »
back to top