Remembering Steve Jobs Across the Web 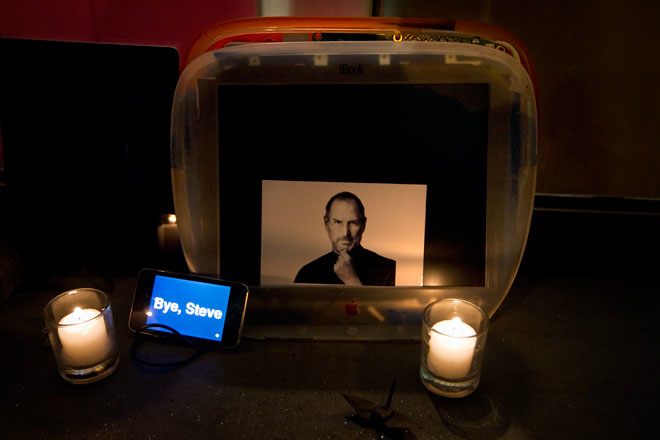 A memorial for Steve Jobs was created by Alf Watt, a communication software engineer at Apple, outside the San Francisco Apple Store on Wednesday night following the news of Jobs' passing. Photo: Jim Merithew/Wired.com

People of all types came out to celebrate, mourn and honor Steve Jobs after learning of his death yesterday. Some converged on local Apple Stores or flocked to Apple’s Cupertino campus, while others paid their respects online.

Several dozen Apple and Jobs fans stopped at the San Francisco Apple Store over the course of an hour Wednesday.

“We just wanted to honor Steve,” said Richard Rucci, a writer who works for a tablet magazine that will be launching on the iPad soon. Rucci’s had a long relationship with Apple products. “My first computer was an Apple IIe in 1989. We’ve always had Macs in our house.”

He and his son Michael brought several dozen tea lights and were lighting them to help create a makeshift memorial in front of the store. “It kinda shows a message for all I have to live up to,” says Michael, a 9th grader. ”He’s a really admirable person. He’s the reason behind all of the tech advances right now.”

Others were kneeling on the sidewalk to write their thoughts, best wishes and favorite quotes on multi-colored sticky notes, which they placed on the glass windows at the front of the Apple Store.

Sharon Geraldine, a 19-year-old visiting from Indonesia, wrote on a Post-It: “Apple is the most awesome phone ever. Thanks Steve Jobs!” “I didn’t plan this, but I’m really glad I came,” she says. “I want to show him how thankful I am, I think he did a good job to the world.”

Others stopped by the store after finishing up their work day.

“I was thinking about going down to Cupertino,” says Tristan Harris, CEO of a San Francisco start-up. ”I worked at Apple a long time ago, but I saw on Twitter that people were coming here. I wanted to share the memory, this is really important. It feels like a member of my family just left. All the biggest things I’ve done in my career relate to the ‘change the world ethos’ of Apple. It’s a really sad day.”

At Apple’s campus, a number of people came to honor Steve’s passing. A shrine was created with flowers, balloons, candles, cards and posters — even a white iPad illuminated with Steve Jobs’ image on the Apple home page.

Tech blog Gizmodo started a “Where were you?” hashtag on Twitter Thursday morning for readers and writers alike to share how they found out about the news. Editor Joe Brown said, “I was walking down the street to dinner. Never made it; got the call, commandeered a stranger’s stoop.”

Former Gizmodo editor Brian Lam took the opportunity to write a detailed post revealing what really went on between himself and Steve Jobs back in 2010 when Gizmodo got a hold of a prototype iPhone 4 prior to its release. “Sometimes,” he wrote, “I wish we never found that phone at all.” The Wall Street Journal’s personal technology columnist Walt Mossberg also took the time to share his account of personal interactions between himself and Jobs, a series of phone calls from the late ’90s when Steve had recently returned to Apple. 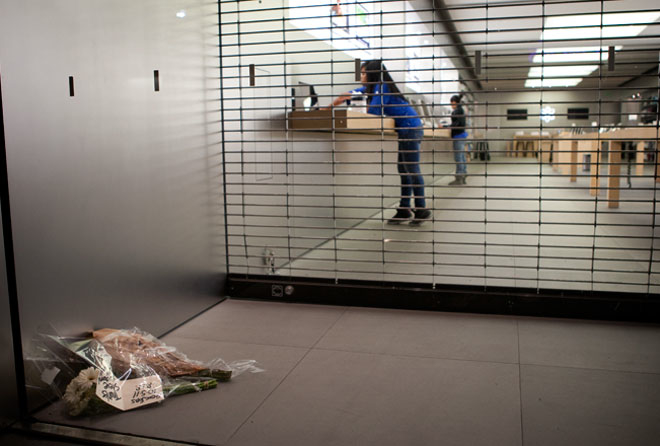 Many learned of Jobs’ passing on one of the very devices that Jobs created, an iPhone, iPad or MacBook. “I was reading about the iPhone 4S on my iPad 2 when I got a push notification about Steve. I could feel the loss of the legend,” Twitter user Cameron Love said. 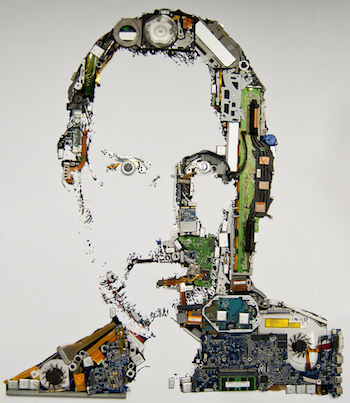 A tribute made from the parts of a MacBook Pro. Image: Mint Foundry

Several Wired readers, like Oojal Jhutti and Mint Foundry, felt inspired to make memorial websites or videos. Others across the internet decided to watch or re-watch Steve Jobs’ inspirational 2005 Stanford commencement address, which the university made available on YouTube.

Jezebel blogger Whitney Jefferson remembered Steve with music. She created a Steve Jobs playlist using the songs she already had in iTunes that were used in Apple commercials.

Ex-Apple designer Mike Matas uploaded a series of photos that provided a glimpse into the fun side of Steve Jobs: images of Steve playing with Photobooth in 2005.

And everyone from Bill Gates to President Obama issued public statements or took to Twitter to share their thoughts of the late, great icon. Gates said, “The world rarely sees someone who has had the profound impact Steve has had, the effects of which will be felt for many generations to come.” Facebook CEO Mark Zuckerberg said, “Steve, thank you for being a mentor and a friend.” President Barack Obama said, “The world has lost a visionary. And there may be no greater tribute to Steve’s success than the fact that much of the world learned of his passing on a device he invented.”

Steve Jobs has made a tremendous impact on both individual people and society at large. I’ll leave you with this xkcd comic. It’s called “Eternal Flame.” 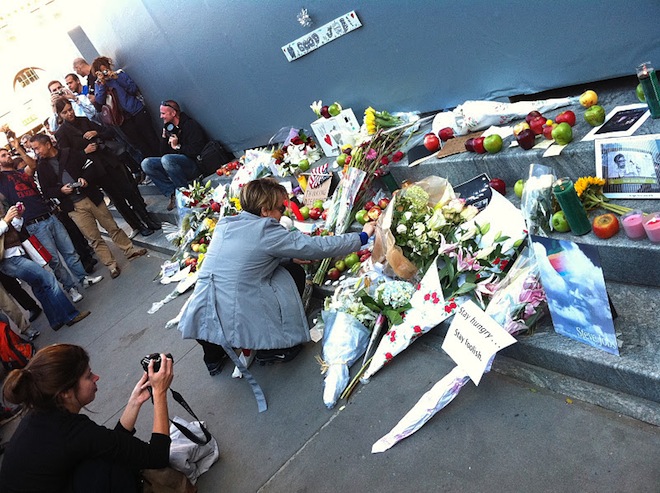 Read 4527 times
Published in News Technologique-Tech News
More in this category: « Survive a Mace Attack What 300 Sea Otters Can Tell Us About the Ocean »
back to top