Director Shawn Levy's new robo-boxing movie Real Steel will have to punch hard to achieve the cultural relevance of "Steel," the 1963 episode of The Twilight Zone upon which it is based. 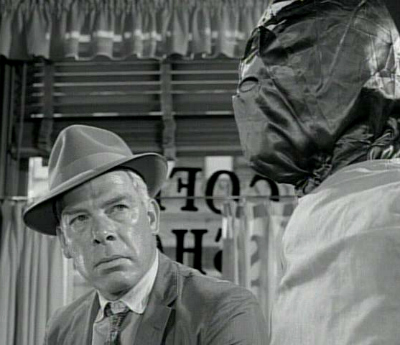 Although it arrived late in The Twilight Zone's meteoric arc, "Steel" proved a poignant, masterful tale of human resilience and artificial obsolescence.

Starring the timeless Lee Marvin (right) as a boxing manager determined to keep the dream of his decrepit robot boxer alive, Richard Matheson's televisual adaptation of his 1956 short story confirmed The Twilight Zone as one of the greatest, if not the greatest, sci-fi programs ever aired.

Sadly, the PG-13 Real Steel, which opens Friday, doesn't totally honor the episode's memory. Judging by the trailers, the new movie's father-son narrative, which pairs Hugh Jackman with Dakota Goyo and is grafted from dual versions of the The Champ, looks like it will cloyingly inject sentimentality into a film that wants to have its Transformers cake and eat it, too.

A more lasting adaptation for the new century would adhere to the original's merge of humans and machines, which is what made the "Steel" story stand out. Mashing our current infatuation with mixed martial-arts bloodsport and fetishism for the latest gadgetry would have been clever as well, and could have delivered a stimulating commentary on what intellectuals used to call cyberculture before that term became uncool.

Still, The Twilight Zone remains an undeniably fertile source for filmmakers looking to mine fascinating sci-fi story lines. Here are nine more episodes of Rod Serling's seminal series that could be turned into stellar movies.