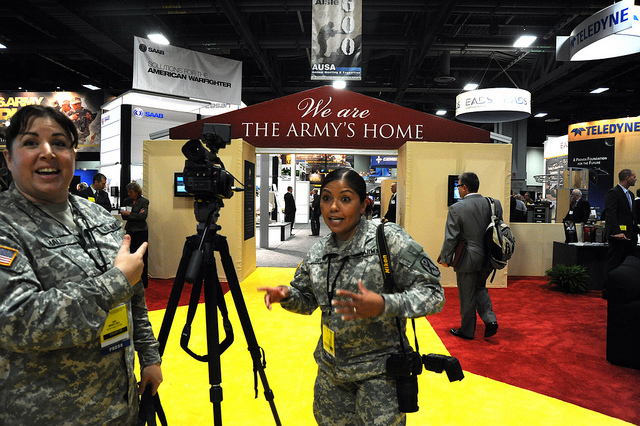 Starting Monday, the U.S. Army and thousands of its closest friends will descend on Washington D.C. for the ground service’s annual convention. Only this year, there’s going to be a pall cast over the whiz-bang displays of futuristic weapons, tanks, drones, and spy gear that the defense industry wants to sell the Army. That’s because the Army is now shopping on a budget.

Don’t get it twisted; every major defense company — and lots of the minor ones — will pack into the Washington Convention Center from Monday to Wednesday to show off their swag at the Association of the U.S. Army (AUSA) confab. Not to give away too much, but we’ve gotten wind of prototypes for “thinking” radios, tricked-out smartphones, ca-razy vehicle countermeasures for homemade bombs, and robots galore. Last year, dudes walked around the convention floor in exoskeletons.

And the Army is there to party. Maj. Gen. Dana J.H. Pittard, commander of the 1st Armored Division, has invited folks to a barnburner he’s calling “Iron Fiesta.” Since it’s happening on Monday night, revelers are encouraged to show up in their favorite NFL jersey.

But after every good party comes the raging hangover. And in this case, the hangover is the recognition that the days of free spending on military gear are over.

The entire defense establishment is waiting to see how deeply Congress, the Pentagon and the White House will cut the defense budget. Estimates range from $400 billion over 10 years to the “doomsday” scenario — Secretary of Defense Leon Panetta’s term — of $600 billion to $800 billion cuts if a comprehensive budget overhaul escapes the politicos. No matter what the number, even the Army’s best friends argue that the ground service should fall on the budgetary grenade. (And especially the armor corps. Sorry, Gen. Pittard.)

And so already, a theme is taking shape. Unsolicited pitches from defense P.R. groups have begun talking about the “affordability” of this or that gizmo. Representatives from the Army National Guard will be on hand to discuss with soldiers — and the press — how reserve service will help keep cash in soldiers’ pockets even after the Army sheds 49,000 soldiers by 2016. When the Army’s leaders, Secretary John McHugh and Gen. Ray Odierno, hold their Monday press conference, it’ll be noteworthy if they talk about issues besides the impending budget cuts.

Still, AUSA is also a time for the Army to stunt. And with the withdrawal from Iraq fast approaching, and a drawdown in Afghanistan beginning, this year’s version will have a lot to celebrate, even if the budget cuts hang like a Sword of Damocles overhead. So Danger Room will be walking the convention floor and stalking the roundtables, filing updates about the craziest and coolest tech, shooting video, and generally taking the pulse of the Army.