A Tight Fit ? Evolution and the Armadillo's Shell 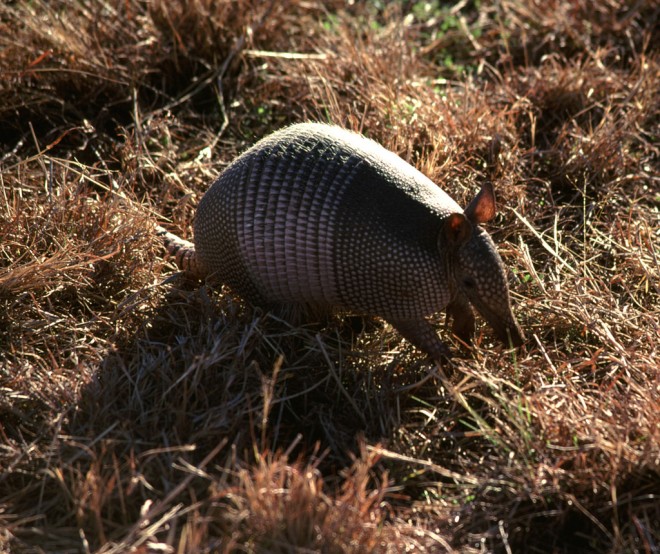 Charles Darwin was a poetic naturalist. The final passage of his 1859 book On the Origin of Species by Means of Natural Selection illustrates this best of all. Who would have thought that all the complex beauty of “an entangled bank, clothed with many plants of many kinds, with birds singing on the bushes, with various insects flitting about, and with worms crawling through the damp earth” could have been created by the perpetual “war of nature”? The great truth and paradox of nature was that competition, death, and extinction were directly tied to the origin of what Darwin felicitously described as “endless forms most beautiful and most wonderful.” Darwin was clearly in awe of the natural world, but, during at least one period of his life, he also had a more literal taste for the creatures which so fascinated him.

Darwin spent his post-college years sailing around the world on the HMS Beagle. During his time with the expedition in Argentina he got the chance to examine the culinary qualities of some of the local creatures. In his diary entry for September 17th and 18th, 1832, Darwin wrote:

What we had for dinner to day would sound very odd in England. Ostrich dumpling & Armadillos; the former would never be recognised as a bird but rather as beef. The armadillos when unlike to the Gauchos’ fashion, cooked without their cases, taste & look like a duck. Both of them are very good.

Armadillos weren’t just food for Darwin’s stomach, though. They also fed his nascent ideas about how life changed during the course of the planet’s history. As Darwin traveled through South America he picked up the fossilized remains of enormous, extinct, armored mammals which would later come to be known as glyptodonts. The armor of these animals resembled the domes which covered modern-day armadillos, just as the skeletons of the giant ground sloths were similar to the living sloths found in South America. There was a deep connection between the living animals and their extinct cousins – clearly, the older types of armored mammals had been replaced by different, related types over time. Such a simple observation formed part of the groundwork for the evolutionary hypotheses Darwin would later articulate.

Naturalists are still learning evolutionary lessons from armadillos. In a paper recently published in the Journal of Mammalian Evolution, biologists Mariella Superina and W. J. Loughry considered the ways in which the evolution of a tough carapace among armadillos shaped their evolution and lifestyle. What are the consequences, Superina and Loughry wonder, of being an armored mammal?

The armor which covers the 21 known species of extant armadillos is a combination of bone plates with tough, overlapping scutes. (Among the modern species is the pink fairy armadillo – Chlamyphorus truncatus – simultaneously one of the strangest and cutest mammals I have ever seen.) Contrary to what you might expect, though, we don’t really know whether the armor provides any benefit as a defense against predators. The armor probably protects armadillos from abrasion by vegetation and their burrowing activities, and parasites have fewer spots to latch on to (they most often cling to the unprotected undersides of the mammals), but there is a dearth of research about whether or not armadillos suffer less predation compared to similar-sized mammals. This is an important bit of overlooked research. If the carapace of armadillos truly does provide a protective benefit, this fact may help partially explain why they are slow and have low metabolic rates. If you’re always carrying a shield, you don’t need to be very fast to protect yourself from attackers.

Still, Superina and Loughry point out that the diversity of armadillo species “possess a formidable variety of carapaces”, and the researchers suggest that such a protective coat has probably influenced the lifestyles of the armadillos in similar ways. In general, armadillos are burrowing insectivores with relatively low metabolic rates and they keep their snouts in the soil so much that it sometimes impairs the intake of oxygen into their bodies. The question is how the evolution of a carapace may have facilitated armadillos in developing such a lifestyle.

For one thing, the carapace of armadillos appears to affect they cope with low oxygen levels. Citing an earlier study published by D.F. Boggs and colleagues in 1998, Superina and Loughry point out that – when faced with low-oxygen conditions – armadillos can’t do like other mammals do and breathe more deeply. The carapace of an armadillo makes their thorax so rigid that, instead, they take more rapid, shallow breaths to intake enough oxygen. Likewise, despite what you might expect from a coat of armor, the carapace of an armadillo actually maximizes heat loss and keeps the mammals relatively cool in hot environments. As a result, the ranges of armadillo species are probably limited by temperature, and their peculiar physiology may also explain why you want to be careful should you ever dig into some armadillo chili. Nine-banded armadillos sometimes carry naturally-occurring infections of leprosy – a bacterial disease which thrives under cool temperatures within a host. Since nine-banded armadillos shed heat easily and maintain relatively low body temperatures, their physiology appears to facilitate occurrences of the disease (though why leprosy does not regularly appear in other armadillos species is a mystery). Make sure your armadillo chili is well-cooked should you decide to try the regional delicacy.

Then there’s the issue of how armadillos reproduce. While a carapace would seem to be quite an obstacle to intimacy, male armadillos get around this – literally – by possessing a penis that can reach up to 60% of their body length. (Perhaps this arrangement, and the frightening organs of male turtles, can give us some clues about how well-armored dinosaurs made the bed rock.) As the fictional mathematician Ian Malcolm put it in his smarmy fashion, “Life finds a way.” And, of course, we can’t ignore how armadillo females give birth to tiny, armored babies. Even though a young armadillo is already born with a well-developed carapace of its own, its shell is softer and has not fully ossified (just as our skeletons are relatively flexible and have not fully transformed to bone when we are born).

Frustratingly, though, figuring out how the various features of armadillos evolved suffers from the “chicken and the egg” problem. Without a detailed fossil record – particularly of the earliest armadillos and their ancestors – how can we investigate the pattern of how certain traits evolved in these animals? Even with a good series of armadillos with transitional features which fill out the evolution of non-armored to armored forms, we can’t directly investigate the physiological traits Superina and Loughry point out. That’s the trouble with trying to extrapolate backwards from living species. When traits evolved in a mosaic fashion in response to another adaptation, it can be difficult to determine which led and which followed.

Nevertheless, the fact that armadillos are covered in a tough carapace clearly places constraints on the natural history of living species. The physiology and reproductive habits of armadillos, at the very least, are affected by their armor covering. Earlier armadillos were almost certainly affected in a similar way. As a result, armadillos may serve as a fine example of constraints in evolution. The origin of one adaptation – such as a carapace – can drastically affect the evolution of other traits in the same animal. A coat of armor can have its benefits, but, over the past 55 million years, how have armadillos come to cope with the costs?