Tessa Farmer's Fairies Feast on the Flesh of Birds 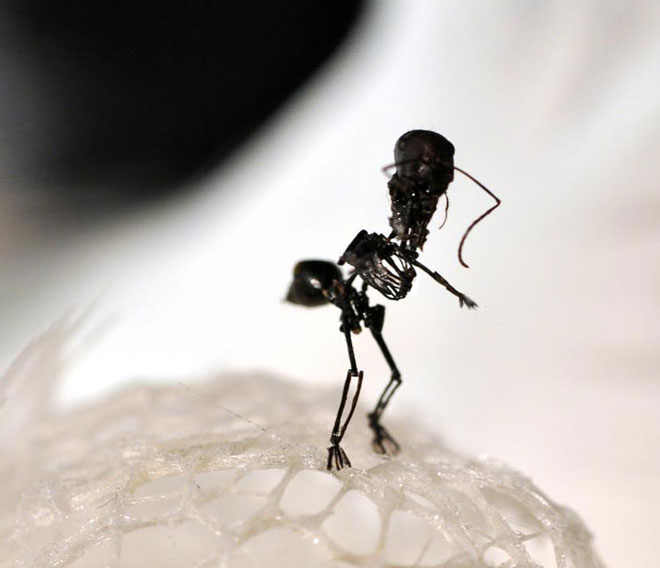 A close-up look at one of Tessa Farmer's eerie fairies, crafted by the artist using insect parts and fern roots.

Last time I checked, Tinkerbell didn’t use hedgehog-spine spears to kill small birds, nor did she feast on their flesh before turning their skeletons into flying vessels. But artist Tessa Farmer imagines a very different kind of fairy.

Farmer’s fairies are not sanitized, twinkle-toed do-gooders; they are dark, nefarious creatures, which destroy and devour whatever dares to cross their path. Farmer told Wired.co.uk: “I am really interested in investigating their behavior and survival mechanisms and how they become increasingly sophisticated in a pseudoscientific way.”

She creates tiny sculptures using dried insect remains, plant roots, taxidermy and other organic materials. Each centimeter-tall fairy has a skeletal form constructed from fern roots and insect parts, including a pair of translucent insect wings. The process takes between three and four hours per fairy.

Her work is displayed in various forms — as elaborate, macabre installations and macrophotographic prints. Many of her pieces feature the fiendish fairies using insects as beasts of burden — riding on the back of dragonflies, slaughtering cockroaches and bullying bumblebees into submission.

Elsewhere they can be seen sawing off hedgehog spines using a shark’s tooth, tying knots in insect antennae or modifying beetles using bird and mammal bones to create armored vehicles.

Currently, Farmer has an installation on show at the Viktor Wynd gallery featuring a swan that has been conquered by the fairies using “surreptitious methods.” The piece is titled The Coming of the Fairies after Arthur Conan Doyle’s book documenting the Cottingley fairies. According to the description of the piece, parasitic fairies laid their eggs into the bird’s eyes and the larvae burrowed into its brain, eating nonessential tissue and eventually growing into adult fairies who could take control of the powerful flying machine. The fairies, in turn, command a gang of soldier ants — used as the first line of defense and attack.

Farmer explained: “I’m really interested in parasitism and the idea that these very tiny creatures have ambitions to conquer larger and larger prey. I’m particularly interested in parasitic insects that can change the behavior of the host so that it kind of becomes a zombie.” In an assault of Lilliputian proportions, the fairies also laid eggs in its skin and transformed the feathers into latticed structures used to encase weapons such as wasps.

Farmer was given the swan after her neighbor found it dead in the canal near her home in North London. She sent it to a taxidermist, who preserved the bird in a flight pose.

Some of the swan’s other feathers have been plucked and added to the skull of a sheep that acts as a supply vehicle, flown by beetles and butterflies. One of the cargo items is a Chilean rose tarantula, famed for being able to flick hairs at potential prey — an attack mechanism that the fairies encourage. Farmer was given the spider — along with a 7-foot python and a lizard — by an exotic pet shop owner she met when she had an exhibition in Lincoln. Smaller captive spiders are made to spin nets for the fairy army, which can be used to catch small flying insects.

Farmer’s fairies are on show at Viktor Wynd Fine Art Gallery in Hackney, London, until Oct. 31. See more of her work in Wired UK’s gallery. 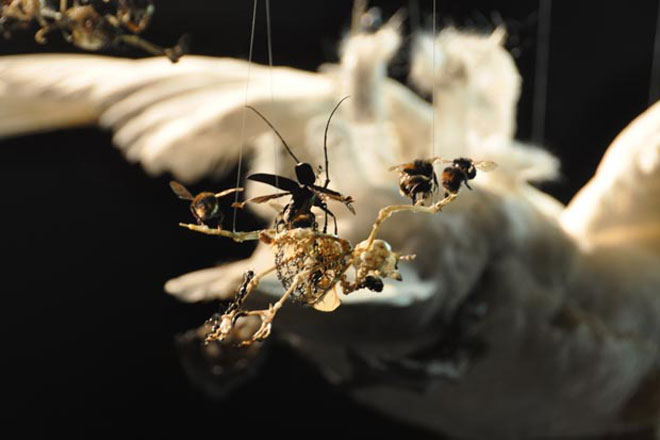 A “ship” made of a bird skeleton is flown by insects under the control of Tessa Farmer's fairies. A taxidermied swan, also conquered by the fairy hordes, can be seen in the background.
Photos: Tessa Farmer