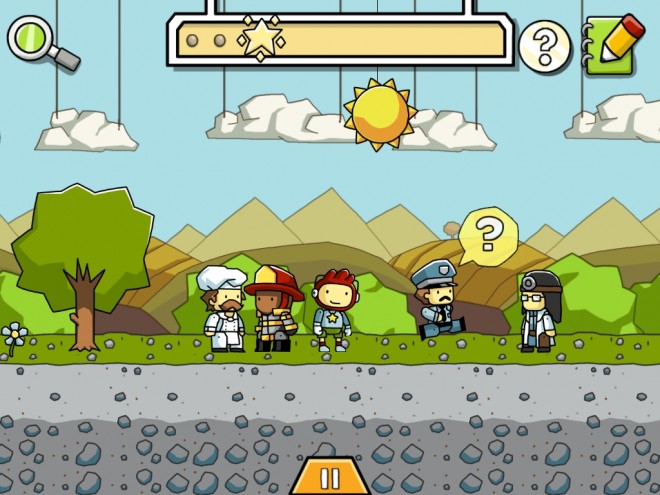 How many traditional console games are actually improved by making the leap to iOS? Scribblenauts Remix must be counted as one of the few.

Released on Tuesday evening to coincide with the release of iOS 5, Scribblenauts Remix is a $5 iPhone, iPod Touch and iPad version of the critically acclaimed Nintendo DS puzzle games. The game presents you with a series of conundrums, which you can solve by typing in anything — like, anything — into a virtual keyboard, which then appears in the game world and acts exactly like it should.

So for example, in one early puzzle you have to help a knight cross a lake with a shark in it. So you could be utterly pedestrian and type “boat,” then get on the boat and float across. If the shark became a problem, you could type “crossbow.” Or “machine gun.” Or put another shark in there and let them kill each other. And if all that sounds too on the nose, you could type “wings” and put a pair on your hero Maxwell, then type “lasso” and snare the knight with your rope, then fly him over, dragging him below you.

Or a million other things.

It’s a brilliant game, and works beautifully on the iPad in particular. It’s great to have a nice big screen — all the better to fill with random objects, dragging them around and watching them interact in surprising ways. It’s great to have the full-sized virtual keyboard at your disposal; much better than typing on the small Nintendo DS screen with a stylus.

Scribblenauts Remix consists of 40 levels pulled from the two Nintendo DS games plus 10 new ones. It uses the new iCloud system to save games across all of your devices, so you can play on iPad at home and pick it up again on iPhone when you’re traveling. (It is only compatible with iPhone 3GS and later models.)