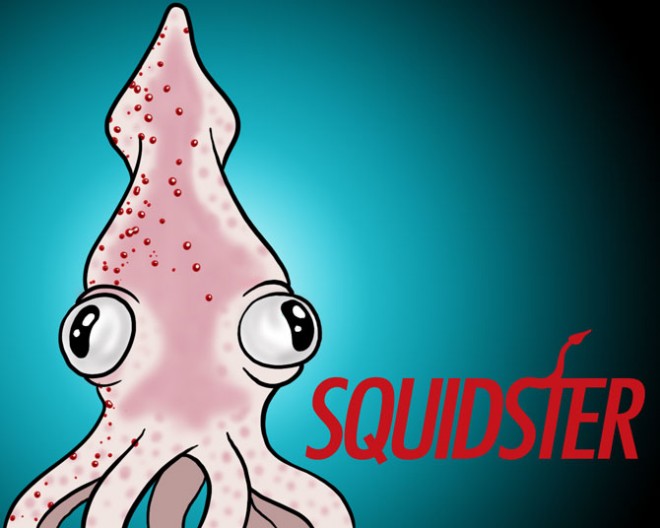 I didn’t know this two weeks ago, but it turns out the problem with science is that there aren’t enough theories involving prehistoric narcissistic psychopathic art mollusks.

Here’s the background: A paleontologist recently gave a presentation in which he posited that there once existed a type of giant sea squid that preyed on ichthyosaurs. Ichthyosaurs, by way of explanation, are ancient aquatic reptiles that look like a cross between a dolphin and a prison shiv.

The paleontologist’s theory was that this killer calamari would capture its prey, drag it down and eat it. So far so good — standard giant death squid behavior. Where it gets weird is that this beastie then carefully arranged the bones of the deceased ichthyosaur on the ocean floor. Where it gets weird and eerie is that it arranged the bones to resemble its own tentacle suckers. (By the way, I took a moment to look up the proper scientific term for tentacle suckers. Turns out it’s “tentacle suckers.” Ten points to House Nomenclature!)

Now, I understand that we can’t necessarily apply our modern sensibilities and morality to the culture of million-year-old purely theoretical invertebrates, but at the same time, that’s some serious serial killer activity right there.

Imagine a child, playing with chicken bones after the family meal, absorbed in his task. The pattern made by the neatly laid-out bones looks a bit familiar, but you can’t place it. So you ask, “What’s that you’re making there?”

The child looks at you and says, in a calm, quiet voice, “It’s me.”

Speaking for myself, at that point I go online and check to see if Amazon delivers exorcisms.

At long last, the scientific method has delivered to us something creepier than bus-size underwater reptiles.

The main problem with the theory, of course, is that it’s pure, artisanal, fair-trade, free-range, locally sourced codswallop. The evidence for it makes the Jersey Devil look as well-documented as Lindsey Lohan’s nipples.

And I say we need more unnerving blatherskite! For too long, we’ve left our nation’s production of nonsense to New Agers, religious fanatics and financial reporters. It’s time that science stepped up to the plate and provided us with the bizarre falsehoods we deserve.

Toward that end, I’d like to request funding — from Congress, Kickstarter or both — for research into the following disturbing hypotheses:

• The first elementary life forms lived in a state of constant, unrelenting terror.

• After the Chicxulub impact, dinosaurs were forced to decide which of their children would die so that the others could live and eventually evolve into pigeons.

• Cro-Magnon hominids prevailed over Neanderthals because they could enter Neanderthal nightmares and frighten them to death with visions of loss and sorrow so potent as to stop their hearts.

• The earliest steam engines were used by the Alexandrians to steam the flesh off live mice.

• Einstein demonstrated that if you take a pair of twins and put one in a spaceship and accelerate that spaceship to near-light-speed, then have it turn around and come back, the traveling twin will have aged less than the earthbound twin, and in fact the traveling twin will find himself a living anachronism compared to everyone he knew and loved. His parents will be aged and infirm, his friends unable to relate to the traveler’s strange and short life, and his treasured childhood locales gone or replaced with sterile strip malls. Depression will sink in, and the traveling twin will feel, paradoxically, that while his life has been extended from his brother’s vantage point, in fact years have been stolen from him, torn from his soul and crushed under the indifferent heel of relativity. Also, one of the twins is evil.

• We haven’t yet observed the Higgs Boson because it’s right behind us.

Born helpless, naked and unable to provide for himself, Lore Sjöberg overcame these handicaps to become a researcher, a rescuer, and a respirator.

Read 3522 times
Published in News Technologique-Tech News
More in this category: « At Last, The Thing Gets Its Prequel What's Inside: Play-Doh »
back to top