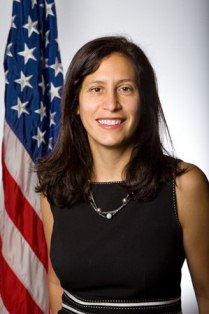 Top-ranking Obama administration officials, including the U.S. copyright czar, played an active role in secret negotiations between Hollywood, the recording industry and ISPs to disrupt internet access for users suspected of violating copyright law, according to internal White House e-mails.

The e-mails, obtained via the Freedom of Information Act, (.pdf) show the administration’s cozy relationship with Hollywood and the music industry’s lobbying arms and its early support for the copyright-violation crackdown system publicly announced in July.

One top official even used her personal e-mail account at least once in the course of communicating during the negotiations with executives and lobbyists from companies ranging from AT&T to Universal Music.

Internet security and privacy researcher Christopher Soghoian obtained the e-mails via a government sunshine request for them filed in June, and provided them to Wired. The e-mails are embedded at the end of this story.

The records show the government clearly had a voice in the closed-door negotiations, though it was not a signatory to the historic accord, which isn’t an actual government policy.

Those so-called “mitigation measures” lobbied for by the record labels and Hollywood include reducing internet speeds and redirecting a subscriber’s service to an “educational” landing page for customers accused of copyright infringement. Internet providers may eliminate service altogether for people repeatedly accused of copyright infringement under what the deal calls “graduated response.”

The e-mails do not entail much detail of the discussions between the administration and industry — as any substantive text in the e-mails (.pdf) was blacked out before being released to Soghoian.

But the communications show that a wide range of officials — from Vice President Joe Biden’s deputy chief of staff Alan Hoffman, the Justice Department’s criminal chief Lanny Breuer to copyright czar Victoria Espinel — were in the loop well ahead of the accord’s unveiling.

“These kind of backroom voluntary deals are quite scary, particularly because they are not subject to judicial review. I wanted to find out what role the White House has played in the negotiation, but unfortunately, the OMB (Office of Management and Budget) withheld key documents that would shed further light on it,” Soghoian said when asked why he sought the documents. He is appealing to OMB to disclose more e-mails.

The e-mails, some of which had the subject line “counteroffer,” show off what seems to be a cordial and friendly two-way relationship between industry and the administration.

Alec French, NBC’s top lobbyist, sent copyright czar Espinel an e-mail from his Blackberry in January of last year, asking if she was “available for call this am?”

She promptly replied: “Btw, i only check my gmail intermittently now so much quicker to reach me on omb email,” referrring to her work e-mail address provided by the Office of Management and Budget. She said she was available for the call. Her personal e-mail address was redacted in the documents.

Espinel, whose position was created in 2008 as part of intellectual property reform legislation, declined in an e-mail to Wired to comment for this story. Instead, the President Barack Obama appointee referred Wired to the OMB press office. That office neither responded for comment nor replied to a follow-up e-mail. 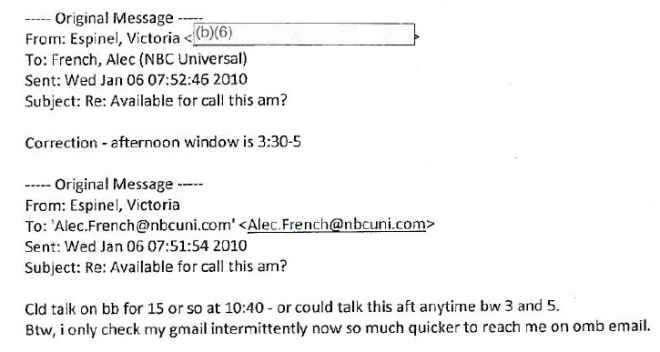 Digital rights groups were barely visible in the messages the government provided to Soghoian, an issue that was not lost on Espinel. In a December 2010 e-mail to Cary Sherman, the RIAA’s president, the copyright czar asks, “How are things going on putting together a rollout plan?”

She adds: “I was at Brookings this morning and CDT came up to ask me to please not have the graduated response announcement be a complete surprise but to have some outreach to stakeholders in advance,” the e-mail to Sherman said.

CDT is the Center for Democracy and Technology, a centrist digital rights group based in D.C.. David Sohn, CDT’s senior policy counsel, said in a telephone interview that the group participated in a “couple of meetings.”

“We weren’t there during the whole negotiating process,” Sohn said. “We did have an opportunity to provide some feedback.”

Months after the e-mail to Sherman, Espinel organized a meeting with CDT and Public Knowledge, another digital rights group. One of the required attendees was Aneesh Chopra, the government’s chief technology officer.

Art Brodsky, a spokesman for Public Knowledge, the only other consumer group believed to have had any input on the agreement, said in a telephone interview, “We were sort of consulted at the end.”

“But we were not an integral part of the process,” he added.

When the deal was announced, the public interest groups put out a joint statement, saying: “We believe it would be wrong for any ISP to cut off subscribers, even temporarily, based on allegations that have not been tested in court.”

All the while, the administration was sensitive that the existence of the accord remain out of public purview.

One e-mail showed that Biden’s office was concerned that CNET’s Greg Sandoval had broken the news of the deal weeks before it was publicly announced.

“So what is the plan? Monitor and respond if need be. We can be ready to move at a moment’s notice,” Hoffman, Biden’s deputy chief of staff, wrote to Espinel and Sherman in a June e-mail. The subject was “the leaked story.”

The RIAA’s Sherman promptly replied to Hoffman’s concerns: “That’s the plan exactly. Thanks for being prepared to move quickly if necessary.”

All in all, the e-mails — which contain redacted draft copies of the deal marked “Privileged and Confidential” — show that the government was on top of the negotiations, and actively sought input from industry.

In a December 2009 e-mail, Espinel thanked DeDe Lea, a Viacom vice president, for forwarding the talking points of Michael Lynton, the Sony Pictures chairman. (The talking points were redacted out.)

“Ok – thanks. And look forward to hearing back from you on that,” Espinel wrote Lea.

In August of last year, in an e-mail to Randal Milch, Verizon’s lead counsel, Espinel said she and Hoffman “were hoping we could meet sometime this week or next,” to discuss the plan.

Milch replied: “Next week would be doable, I hope.”

Espinel had organized a meeting last year between Hoffman, Sherman, herself, NBC general counsel Rick Cotton and Michael O’Leary, the Motion Picture Association of America’s top lobbyist, according to a September 2010 e-mail. Next to O’Leary’s name on the e-mail invite was “Today is his birthday” in parenthesis.

Terms of the brokered deal include: On an internet subscriber’s first reported copyright offense, internet subscribers will receive an e-mail “alert” from their ISP saying the account “may have been” misused for online content theft. On the second reported offense, the alert might contain an “educational message” about the legalities of online file sharing.

On the third and fourth reported infractions, the subscriber will likely receive a pop-up notice “asking the subscriber to acknowledge receipt of the alert.”

After four alerts, according to the program, “mitigation measures” may commence. They include “temporary reductions of internet speeds, redirection to a landing page until the subscriber contacts the ISP to discuss the matter or reviews and responds to some educational information about copyright, or other measures (as specified in published policies) that the ISP may deem necessary to help resolve the matter.”

An internet subscriber could get such notices without having engaged in illegal downloading if others have used their connection or if the monitoring company makes a mistake.

The RIAA, which includes Universal Music Group Recordings, Warner Music Group, Sony Music Entertainment and EMI Music North America, kicked off the negotiations with ISPs in December 2008, when it abruptly stopped a litigation campaign which included some 30,000 lawsuits targeting individual file sharers. The RIAA and the MPAA wanted ISPs to monitor Americans’ internet usage for copyright infringement, but the agreement does not include any provisions for that.

One Turkewitz e-mail was addressed to about 50 government employees. It appeared to pirate a blog post from Canadian lawyer Barry Sookman, who had analyzed an Irish court decision on internet piracy. The entire 3,200 word article is included in the e-mail.

Turkewitz, the RIAA vice president, told Wired he “had Barry’s permission to forward his piece.”

Sookman did not respond to a request for comment.

Read 4044 times
Published in News Technologique-Tech News
More in this category: « Now You See 'Em, Now You Don't: Stealth Weapons From Around the World Typo Positive »
back to top