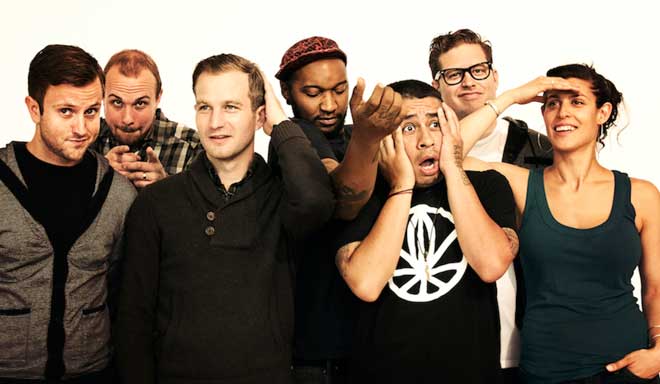 Jay-Z and Kanye West may be on their grind to Watch the Throne, but Minneapolis-based rap collective Doomtree would rather music did away with monarchs altogether.

On forthcoming album No Kings, the Doomtree crew calls for equal parts rebellion and respect for each other. It’s exactly the kind of thing you’d expect from the label that mashed up Wu-Tang Clan and Fugazi on the Wugazi13 Chambers mixtape that blew up the internet this summer (download it here).

To give a taste of what’s to come, Wired.com is premiering Doomtree’s new single, “The Grand Experiment.” It’s a mix of bombastic bass and drums, sing-song melodies and revolutionary rhymes (“All of Olympus is laughing / Until we go and split the atom,” crew member Dessa, above right, raps).

Doomtree “The Grand Experiment” by WeGetPress

Stream and download the track above. Doomtree’s No Kings hits record stores Nov. 22.

Read 3802 times
Published in News Technologique-Tech News
More in this category: « Typo Positive Review: Flying Free as a Bat Through Arkham City »
back to top