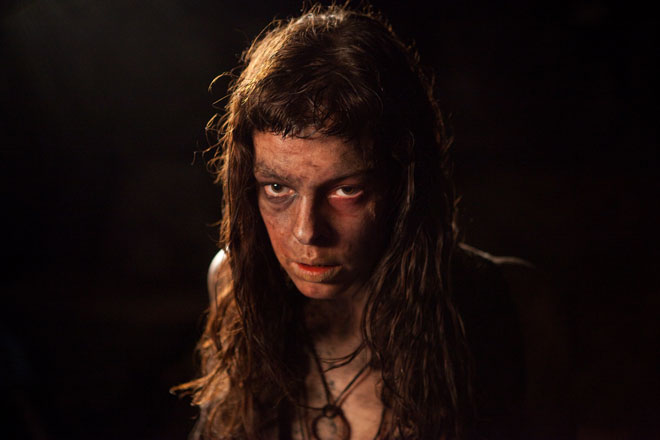 Pollyanna McIntosh plays a feral woman captured by a family man in The Woman.

It’s hard to recommend a movie about a feral woman who’s captured in the woods, shackled in a root cellar and serially abused in a deranged attempt to “civilize” her.

In fact, it’s probably the smartest movie about a caged woman you’ll ever see.

Director Lucky McKee starts out arty, showing us a filthy woman dressed in rags and living in the wilds. The slow-mo intro might make you fear you’re in for an hour and a half of pretention, but The Woman quickly slingshots into a backyard garden party that introduces the movie’s main characters, the Cleek family. 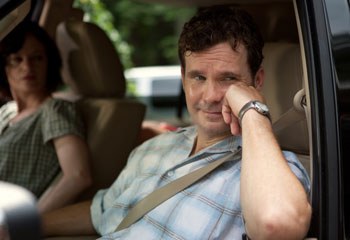 Bossy lawyer Chris, played perfectly by Sean Bridgers, is the bad dad who rules the Cleek clan with a peculiar mix of patient instruction and physical abuse. Bridgers brings a weird Will Ferrell vibe to the role, making the character seem almost loveable — until the moments when he’s utterly despicable.

After he discovers the mud-covered wild woman during a hunting trip, Chris quickly traps her and enlists his wife, son and two daughters in a bid to turn the snarling creature into something a little more refined. But The Woman is no My Fair Lady: The title character endures a series of brutal attacks at the hands of Papa Cleek and his increasingly sociopathic son. (You can see one of the family’s early interactions with the woman in the clip at the bottom of the page.)

Bridgers’ portrayal of the aw-shucks authoritarian patriarch, coupled with especially strong performances by Angela Bettis as his wife, Lauren Ashley Carter as his withdrawn daughter Peggy and Pollyanna McIntosh as The Woman, brings a heft to the film that’s uncommon in the horror genre these days.

Packing several legitimate surprises and a fair amount of ugliness, blood and vengeance, The Woman stubbornly maintains a streak of black humor as it satirizes patriarchal suburban life. McKee slowly peels back the layers of his story and ultimately delivers an unsettling message about the horrors that sometimes bubble below the surface of outwardly normal families.

Director McKee’s approach to the subject sparked a firestorm of controversy when The Woman screened at Sundance, disgusting one viewer enough that he went on a rant in the hallway outside the screening.

“This is not art,” said the concerned viewer, captured in the video at right, which is so entertaining it could have been a publicity stunt. “This is bullshit. This is degradation of women in an absolute way…. This film ought to be confiscated, burned — there’s no value in showing this to anyone.”

It’s easy to see how The Woman could provoke this type of response. But others have judged McKee and his movie differently. Ain’t It Cool News said the film delivered “a very positive message hidden under a very brutal and fucked-up movie,” while Hitfix’s reviewer saluted McKee as a “radical feminist horror filmmaker.”

The publicity team working The Woman shipped the screener in an airsickness bag, a testament to the movie’s ability to upset some viewers (and a throwback to some of the creative genius used to market horror films in the past).

The beautiful thing is that you now have the chance to see for yourself what all the controversy is about, if you’re so inclined. Don’t bring the kids — and the squeamish should consider the barf bag.