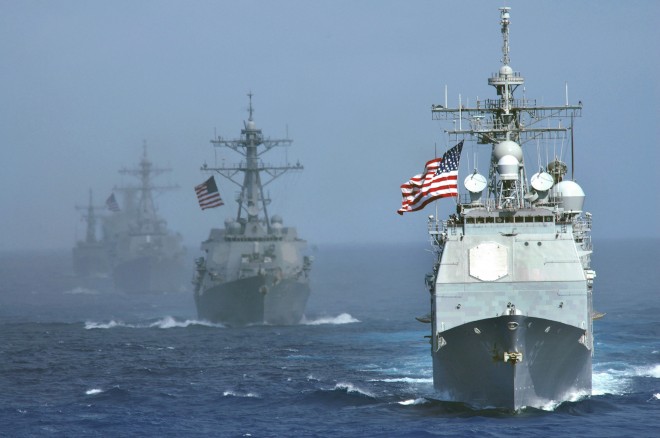 On the surface, Mitt Romney’s proposal to inflate the Navy is seaworthy. The ex-Massachusetts governor and GOP presidential frontrunner wants to build six more ships every year to meet the increased demands that the U.S. military will likely face in the big, blue Pacific Ocean.

Naval analysts generally like the idea, which they say is needed to fill a whopping hole in the U.S. fleet, come 2030 or so. Just a few problems, the seapower wonks say: Romney has given no indication of what kinds of ships he wants built; he doesn’t explain what they should do; and his proposal might give a deficit-obsessed D.C. sticker shock.

Shipbuilding is a major national-security priority for Romney. In an Oct. 7 speech at the Citadel and his campaign’s big national security white paper, he pledged, “I will reverse the hollowing of our Navy and announce an initiative to increase the shipbuilding rate from 9 per year to 15.” It’s the most specific, declarative statement on defense Romney’s made in the campaign thus far.

Independent naval analysts don’t know how much Romney’s proposal will cost, since nowhere in the white paper does Romney specify what ships make up his expanded fleet. (The Romney campaign didn’t respond to Danger Room’s requests for clarification on what ships the candidate wants built.) That complicates any analysis, since ships aren’t interchangeable. “Fifteen ships a year sounds good,” says Frank Hoffman, who recently left the policy shop at the Navy Department, “but what kind of ships? For what strategy?”

But judging by the Navy’s current wishlist (mostly, more destroyers and attack submarines) the analysts guesstimated that Romney’s plan would most likely cost about $7 or $8 billion a year, on top of the Navy’s estimated $19.8 billion shipbuilding budget. Since the Defense Department budgets for five years at a time, that would add $35 to $40 billion to the shipbuilding budget at a time of austerity.

Romney’s wrong to suggest President Obama’s to blame for “hollowing” the Navy. Nine ships a year is the average build ever since the end of the Cold War. And for the past two years, Obama’s annual defense budgets have asked for ten.

But the Republican candidate has a point. The Navy’s latest 30-year shipbuilding plan envisions a need for 328 ships, up from its last assessment of 313. It’s got 276 now, more than a fifth of which aren’t ready to fight. And over the horizon in the 2020s are the retirement of about 70 Reagan-era ships. A recent Congressional Research Service assessment bluntly stated that the “30-year plan does not include enough ships to fully support all elements of the Navy’s 313-ship goal over the long run,” let alone a fleet of 328 ships.

None of which comes cheap. For years, seapower wonks have blasted the Navy’s shipbuilding plans as unaffordable. The plan that the Navy sent to the Hill this year passed muster — barely. The Congressional Research Service report rated the plan as affordable, but largely through accounting tricks. The Navy plans to buy cheap ships early on, but when it comes time to buy expensive items like the next-gen ballistic missile sub, that’s “a considerably more expensive proposition,” the report warns. Romney would stack additional costs on top of that.

It’s possible Romney could buy those cheaper ships, like the $250 million Joint High Speed Vessel, or the (maybe) $500 million Littoral Combat Ship (LCS) that the Navy considers a big part of its future. The Navy wants 55 LCSs, although it hasn’t figured out if the ship is meant to fight along a shoreline, hunt pirates off the Somali coast, go after submarines — or some combination of all of the above.

But the rationale — however vague — for Romney’s ship surge suggests something more ambitious than those two ships offer. “[T]he United States should maintain and expand its naval presence in the Western Pacific,” Romney’s white paper contends. “We should be assisting partners that require help to enhance their defensive capabilities.”

Going off that framework, Eric Wertheim, author of the U.S. Naval Institute’s encyclopedic Combat Fleets Of The World, thinks the likeliest scenario for Romney will cost an extra $7 billion annually. For that money, “you could have one new Burke-class Destroyer at about $2 billion; one new Virginia-class submarine, also around $2 billion; and one new San Antonio-class amphibious ship about $1.5 billion; plus two Joint High Speed Vessels and one Littoral Combat Ship,” he says.

If the Navy focuses on the cheaper ships, then Romney’s plan probably runs around $3 billion per year. But if the Romney Navy prefers bigger-ticket items — say, a $3 billion America-class large deck amphibious ship, and some more destroyers and subs — then the price tag is more like $13 billion extra.

Wertheim thinks a cost of $3 to $7 billion is most likely. “I think it would most probably be somewhere between the low to medium end scenarios,” he says.

Hoffman, a retired Marine lieutenant colonel, thinks the Romney proposal would most likely cost between $7 and $8 billion. “One could either trim off the next-generation ballistic missile submarine to preserve capital for the fleet build-up, or cut back on short-legged aviation and national missile defense,” Hoffman tells Danger Room.

There’s an assumption lurking here: The Navy will spend the surge money to replace perceived shortcomings in the fleet. The Navy frets about its destroyers and attack subs dwindling, for instance. By 2024, the Navy projects it’ll have about 68 cruisers and destroyers, well below its desired fleet of 94 cruiser-destroyers; and short 9 attack submarines by 2030. “The projected cruiser-destroyer shortfall is, by some measurements, the largest projected shortfall of any ship category in the Navy’s 30-year shipbuilding plan,” (.PDF) writes Ronald O’Rourke, one of the Congressional Research Service’s Navy specialists.

In contrast, the Navy’s shipbuilding strategy (.PDF) envisions keeping the current number of 11 aircraft carriers. Which, by the way, are budget-busters at $12 billion a pop.

Romney doesn’t explain where he’d get the money. The Defense Department is gearing up for massive cuts as Congress and the Obama administration try to close a cavernous budget deficit. Romney’s white paper pledges that he’ll “find efficiencies throughout the Department of Defense budget that can be reinvested into the force.” But after ex-Defense Secretary Robert Gates spent a year doing that, no budget analyst really thinks there’s much more efficiency to be harvested.

Similarly, Romney doesn’t lay out a plan for what his enlarged Navy would do. But it’s not hard to imagine. The last chief of Naval operations envisioned an expansive role for the U.S. Navy, especially in the western Pacific — increasingly the economic center of the world — after the Iraq and Afghanistan wars wind down. So did Gates.

And that’s why several of the Navy wonks surveyed think Romney’s shipbuilding surge is a decent idea. “There’s just not enough ships right now, and as you look to future, it’s gonna get worse,” Wertheim says. It’s just a matter of making real choices about what the fleet should look like and what it should do.

“The Pacific is a big blue place on the map, and while the Middle East looks very sandy on my map, we need not plan to violate their lands if our true objective is to ensure the passage of oil from the Straits of Hormuz and beyond,” adds Hoffman. “So naval resources are at the top of my list and increased shipbuilding is required as we approach the 2020 period.”