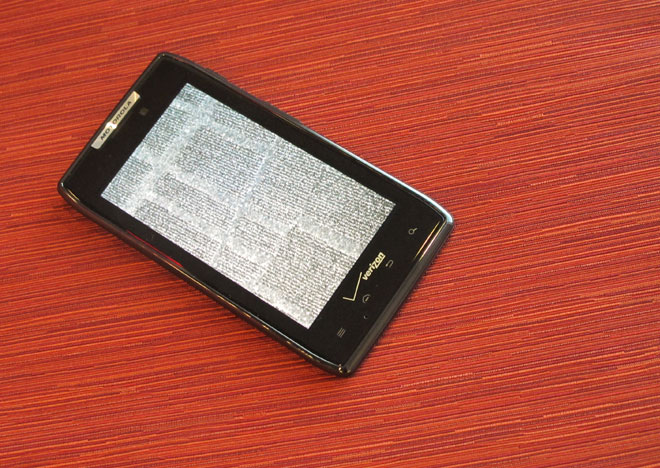 Tuesday morning, Motorola announced its new flagship Android smartphone, the Droid Razr. Now, after spending some quality hands-on time with the phone, I can say it’s poised to become a formidable competitor in the Android space — if not also a challenge to Apple’s much-lauded iPhone 4S.

Motorola is celebrating the new Razr as the world’s thinnest smartphone, and its slim packaging is the first thing I noticed as soon as I picked it up. At 7.1 mm, the Razr dethrones the previous “thinnest device” title holder — Sony Ericsson’s Xperia Arc — by a full 1.6 mm. It’s difficult to tell just how thin the Razr is from promotional press shots, but considering the amount of high-end hardware packed inside — a 1.2GHz dual-core TI processor, 1GB of RAM and 32GB of storage (16GB care of a microSD card) — the phone’s svelte shape is impressive.

In order to slim down the phone’s profile, Motorola used threaded Kevlar fiber on the Razr’s back casing. This material, most famously used in bullet-proof vests, helps maintain structural integrity while keeping the phone’s figure trim.

With Kevlar on one side and a sculpted Gorilla Glass display on the other, the Razr is built for durability, yes. The phone’s innards, however, are also sealed inside a stainless steel interior chassis for extra shock absorbancy and all-around toughness. The phone is named after one of the most successful gadgets in Motorola history – a product famous for its iconic design — and it’s clear that Moto paid attention to all design features in order to elevate the Razr to a marquee-level status worthy of its namesake. 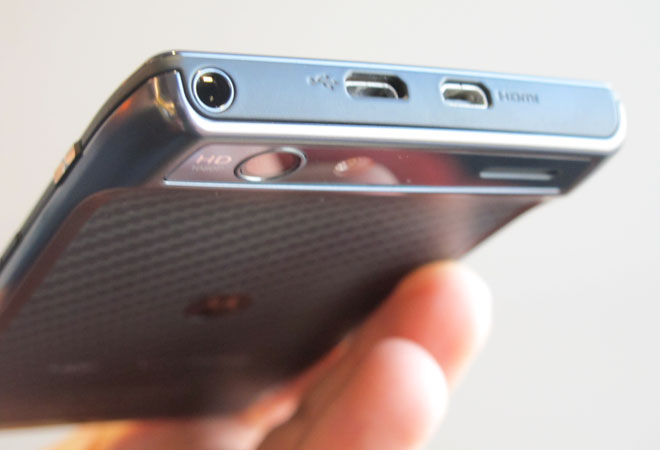 Here you can see the Razr's Kevlar surfacing -- as well as the top portion of the phone, which exceeds Motorola's category-besting 7.1mm thickness.

But how does this curious object feel? Well, however attractive its hard edges and boxy aesthetic may be, the squared-off chassis did feel a bit awkward in my hands. The display measures in at 4.3 inches. It’s by no means the largest screen on the market, but the phone itself feels considerably larger than what a 4.3-inch display should suggest. But I did enjoy the Razr’s Kevlar backing. The woven material is soft to the touch, with a pleasingly grippy surface quality.

I loved the image quality of the screen. Photos render in crisp detail, with bright, brilliant colors. Shah said in order to save on battery life, the design team went with Samsung’s Super AMOLED display, which is famous for its modest power requirements. Considering that the phone comes with a battery-sucking 4G LTE radio, you’ll want every bit of power conservation that Moto’s engineers can muster.

One of my favorite Razr features is Motorola’s Smart Actions app. In essence, it’s a user-friendly scripting tool that helps control all the phone features that suck down battery life. Using Smart Actions, you can set up automatic tripwires that will adjust screen brightness, Wi-Fi, 4G and GPS settings when power conservation becomes critical. For example, you can set the Razr to automatically lower its display brightness as soon as battery life drops below 30 percent.

Smart Actions also contains settings that have nothing to do with battery conservation — for example, automatically switching your phone from vibrate to ringing mode when GPS detects that you’ve arrived at home. How ’bout them apples, Siri? 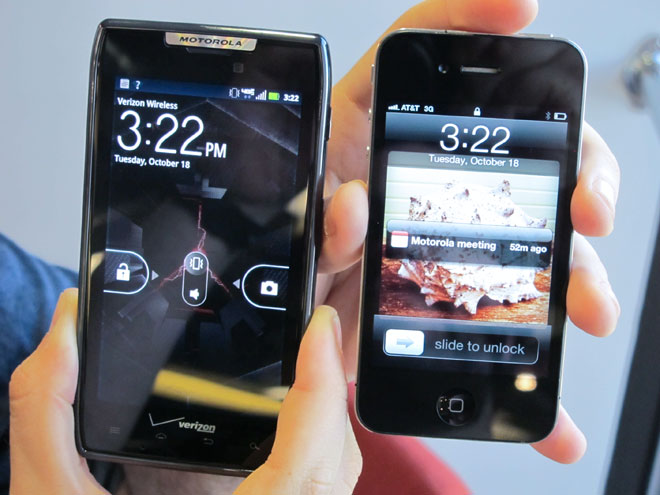 This full-frontal shot shows how the Razr compares to an iPhone 4/4S. You get a much bigger screen, and the Razr even weighs 13 grams less.

As with most of Motorola’s high-end devices since the debut of the Atrix in January, the Razr will launch with a slew of peripheral options. Back again are the webtop and lapdock stations. Like those that work with the Atrix, Photon and Bionic handsets, the webtop dock allows you to plug the Razr into an HD charging station and connect to an external HD monitor. As such, you’re able to use the phone as makeshift computer. Moto’s patented webtop environment is a nifty desktop-style UI, complete with the ability to surf the web using Mozilla’s Firefox Browser. 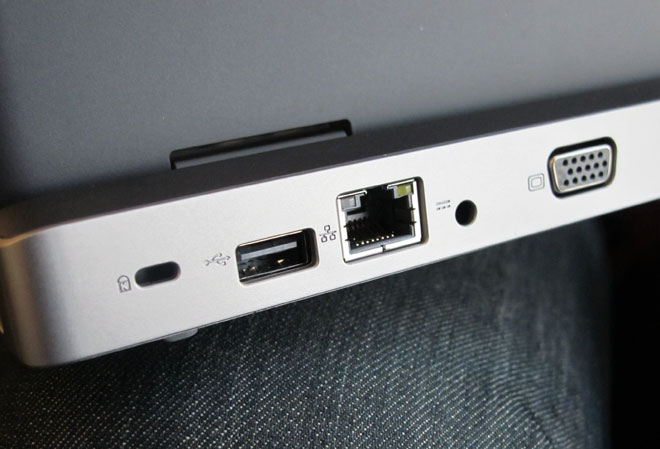 The new dock comes correct with Ethernet and USB support among other business travel-friendly goodies.

Shah said Motorola learned from user experience studies of previous lapdock-capable phones, and, as a result, its two new docks include extra ports and connectivity option. Specifically, the Razr-compatible Lapdock 500 Pro now features an Ethernet port and multiple USB ports. In essence, it has most of the I/O attributes of an actual laptop.

The company has bet big on connectivity and peripheral hardware options before, and failed miserably in execution (see Atrix, Xoom, et al.). But after these first impressions, it seems Motorola’s Razr redux may have gotten peripherals right.

Read 4916 times
Published in News Technologique-Tech News
More in this category: « A Google-a-Day Puzzle for Wednesday, Oct. 19 Apple Closing Some Stores During Wednesday Memorial Service »
back to top