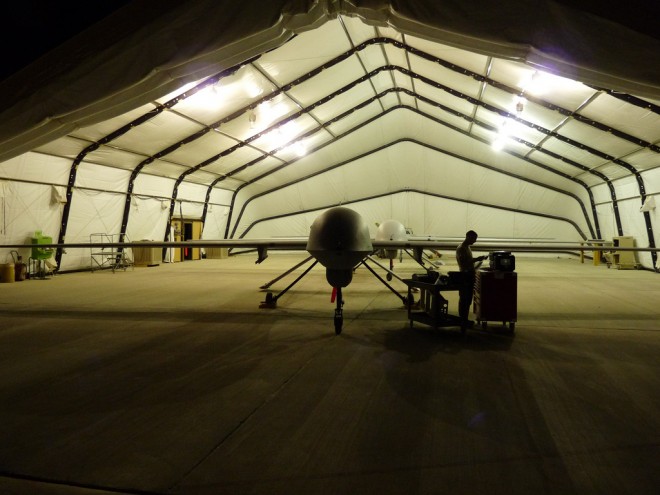 In mid-2009, as the Pentagon began sending a slew of new spy planes to Afghanistan, a top military official joked that the U.S. was about to “blot out the sun” with all the new surveillance drones there.

Turns out, that official wasn’t entirely kidding. Back in 2009, NATO aircraft flew about 22 surveillance missions per day over Afghanistan. Today, according to military statistics, the coalition is flying nearly 85 spy sorties daily, for a total of more than 22,800 missions in the first nine months in 2011.

Back when the official cracked his joke, there was only a handful of spy planes flying at any given time over Afghanistan. Now, there are 54 Predator and Reaper drones in the air at once, most of them above Afghanistan. They’re joined by an array of executive-planes-turned-aerial-snoops and dozens of traditional fighters and bombers, all of which now come equipped with surveillance cameras. Thanks to this aerial spy surge, Afghanistan has become a virtual Panopticon.

It’s not entirely clear what effect all of these new eyes in the sky are having; it’s difficult to take one category of gear, and assign to it a military result. NATO says the number of insurgent attacks is down about a quarter from last summer. But compared to the same period in 2009, militant strikes are up by roughly 50 percent (.pdf). Just because you can see an enemy does not mean you can stop him, it would seem.

One thing is clear, however. The role of air power is changing. Pilots still drop bombs and fire off missiles. But the attacks are relatively rare, compared to the number of ISR (“Intelligence Surveillance and Reconnaissance”) runs. Spy sorties typically outnumber strike missions by 4-to-1 or more.

“Air forces spent the last 100 years figuring out how to hit any target anywhere on the face of the earth, in all weather, day, or night, with precision, to precisely target any spot on the globe. We can do that now,” e-mails retired Gen. David Deptula, the one-time Air Force intelligence chief. “The difficult challenge is finding those objects, places, people upon which or whom we want to affect. Ergo the increased attention to all aspects of ISR.”

Other forms of air power have also increased since 2009 — although not as much as the ISR missions. Refueling flights have jumped from an average of 35 per day to 48. Cargo sorties went from 18 daily to 28. With tens of thousands of new ground troops pushing into Taliban strongholds, the number of forces needing to be rescued has risen sharply. Personnel recovery missions have more than doubled since 2009, from about 3.5 per day in 2009 to 7.7 today.

Those missions may start to decline if the Obama administration follows through on its pledge to withdraw ground forces from Afghanistan. But the spy surge will likely continue. The Air Force is supposed to add nine more drone combat air patrols by 2013. And then there are the dozens of new blimps and aerostats floating above Afghanistan, all equipped with unblinking eyes.

Read 2960 times
Published in News Technologique-Tech News
More in this category: « Broke in Tokyo: Retro Game Shopping on a Weak Dollar MotionCAPTCHA, plus ludique, plus rapide »
back to top