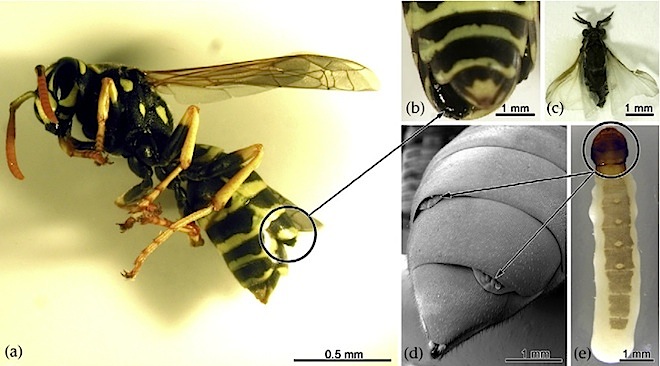 Even in a world where parasites routinely turn insects into zombies, radically altering their bodies and behavior to serve the parasites’ demands, the story of Polistes dominulus and Xenos vesparum stands out for its weirdness.

Infected P. dominulus — better known as common European paper wasps — reject their genetically preordained roles, abandon their hives and embark on a long, macabre journey during which a few live for a time as queens, albeit murderous queens.

“There are many examples of parasitoids that induce hosts to new behavior which is out of their normal life cycles. But in this case, the host is doing something that’s not appropriate for its caste,” said entomologist Fabio Manfredini of Pennsylvania State University, co-author of an Oct. 8 Animal Behaviour study of this odd life cycle. “With social insects, individuals follow different castes. The parasite erases the caste they should belong to, what they were born for.”

For an individual wasp worker, the story begins during a springtime encounter with X. vesparum fly larva, which might be found under a leaf or even deposited in a colony. (More on that later.) The larva leaps onto the wasp, burrowing into its abdomen, where it will feed on its host’s blood. That’s just the beginning.

In coming weeks, the larva grows larger and stronger. The wasp grows, but slowly; it’s smaller than its peers, with smaller wings. It also becomes withdrawn. Other workers continue to forage, care for larval siblings, maintain the hive and defend the colony, but infected wasps act for themselves. “They lose any specifically social behavior,” said Manfredini. Early in summer, when a hive is busiest, the infected wasp leaves and travels, as if under command, to some unknown but predetermined place. Other parasitized wasps converge there, too. When enough have gathered, mating begins — not for wasps, which now have shrunken and non-functional ovaries, but the parasites.

Male X. vesparum, now fully grown and winged, wriggle from their hosts’ stomachs. They copulate with females, which remain mostly inside their hosts, poking only one end of themselves outside.

For wasps that were infected by male X. vesparum, the story ends. They die, mostly from pathogens entering through the gaping holes in their sides. Wasps still hosting female X. vesparum, however, live on. They gather food and fatten themselves, a treat experienced only by wasp royalty, then travel to sites where queens gather in late autumn.

There they spend winter, resting beside the queens. “The parasite is triggering a queen behavior, but you can’t say they’re really queenlike, because they’re not reproductive,” said Manfredini. Come spring, the real queens go off to prepare nests, but infected wasps stay behind, waiting. Inside them, gestation is nearly complete.

Then, with exquisite timing, the wasps depart. Some search out foraging areas, leaving X. vesparum larvae like traps underneath leaves. Others return to their colonies at mid-day, when the real queen is out foraging, and while colony-defending workers have yet to mature. “After that, they start wandering among the colonies,” spreading their deadly larval load, said Manfredini. “They don’t lay eggs. They don’t build colonies. They’re completely anarchic.”

'This bizarre parasite-parasitoid ... breaks all the traditional rules.'

For such a complex life cycle to emerge required a long period of co-evolution, said Manfredini. And though it might be gruesome, it’s also balanced: X. vesparum is widespread, but European paper wasps are common and thriving. “It’s better to tolerate than to fight the parasite,” he said.

Other examples of parasite-induced insect alterations include high-climbing caterpillars, ants that look like berries and suicidal caterpillars. But few are quite so complex, Manfredini said.

By altering everything from individual wasps’ bodies and behaviors to colony caste structures, wrote Manfredini and colleagues in Animal Behaviour, “this bizarre parasite-parasitoid … breaks all the traditional rules.”

Citation: “When a parasite breaks all the rules of a colony: morphology and fate of wasps infected by a strepsipteran endoparasite.” By Laura Beania, Romano Dallai, David Mercati, Federico Cappa, Fabiola Giusti,

Read 2660 times
Published in News Technologique-Tech News
More in this category: « Why Google Doesn't (and Shouldn't) Care About Tablets Yet Caterina Fake: Killing the Abraham »
back to top