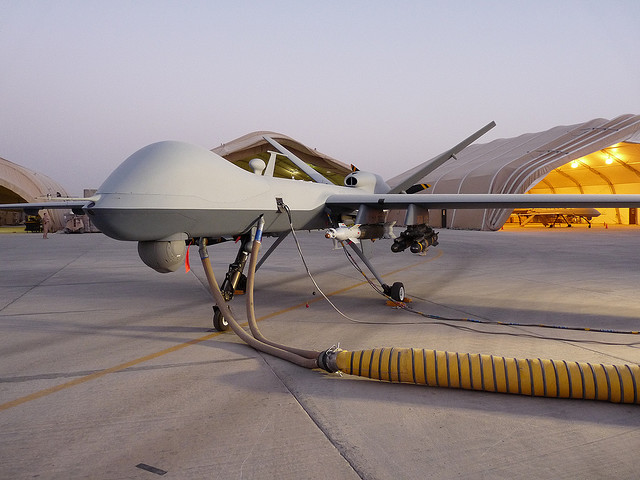 It took Predator drones about three weeks from the start of NATO’s war against Moammar Gadhafi to arrive in the skies over Libya. Since then, they’ve been busy: from April 21 to 9 a.m. Central European Time today, the Predators have launched 145 strikes, according to Pentagon spokesman George Little.

The Predators did not let up after Libyan rebels captured Tripoli in late August. By then, the U.S. drones had dropped their Hellfire missiles 92 times in four months. In the remaining two months, the Predators slightly stepped up their deadly pace during the residual hunt for Moammar Gadhafi, with 52 more strikes.

But the Pentagon will not confirm that the Predator, or any other U.S. airframe, was involved in the NATO airstrike in Sirte preceding Gadhafi’s death.

The robotic Predator among the U.S. strike aircraft most involved in the Libya war. Ever since the war transitioned out of the U.S.’ operational command in April, U.S. warplanes have taken a backstage to British and French fighter jets. But out of the 397 times that U.S. aircraft have released their weapons since April 1, 145 of those have been Predator strikes.

And take a look at those 397 strike sorties that U.S. aircraft have flown since April 1. It’s an eye-opening figure for a military operation that the Obama administration refuses to concede is a war. But it’s also significantly less than the 554 airstrikes the U.S. launched in Afghanistan in September [ck] alone. And while U.S. warplanes have flown a total of 1,825 armed sorties — in which they take off weapons-hot, but don’t necessarily fire — in that period, non-U.S. NATO warplanes have flown 7,793 of them.

The question that the Pentagon still won’t answer: when will U.S. warplanes — manned and robotic — leave Libyan airspace? That war, Little said, has cost $1.1 billion as of September 30.

Read 2833 times
Published in News Technologique-Tech News
More in this category: « Why Apple Isn't Going to Release a 7-inch iPad Cloud Connectivity Turns Cars Into Chameleons »
back to top