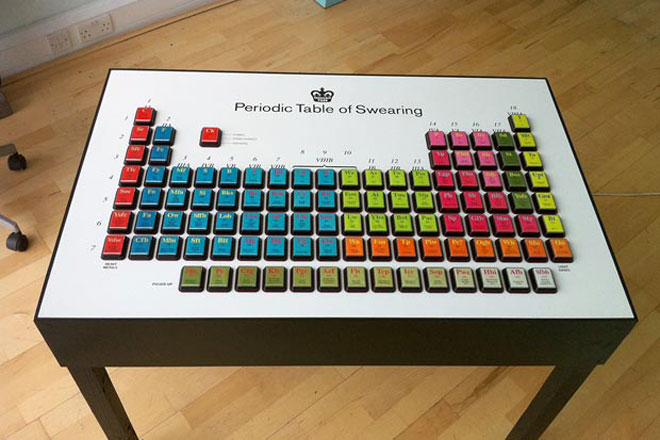 Artistic duo Modern Toss (aka Jon Link and Mick Bunnage) have turned their illustrated Periodic Table of Swearing into a physical, interactive machine.

Modern Toss teamed up with design studio Clay to build the device, which wouldn’t look entirely out of place in a 1970s power station. That is, if the power station was designed by a Tourettes sufferer — possibly Mr Tourettes, one of Modern Toss’ popular characters.

The machine features more than 100 brightly colored fruit machine buttons which, when pressed, unleash creatively foul language — perfect for the lazy or sore-voiced hater. Most of the swears are not for delicate ears, but a few of the tamer ones include: bollocks to that (Btt); silly bastard (Sb) and stupid old wanker (Sow). You can check out the video below to see some of the stronger ones.

In addition to 100 buttons, the machine comprises of more than 300 feet of cabling, laser-cut MDF and more than 300 soldered joints.

Adrian Ward, co-founder of Clay, told Wired.co.uk: “The table could have gone in a number of directions (think multitouch, glossy screens, etc.) but we figured that the physical element was important. We spent a long time picking the right type of fruit machine buttons. On the inside it looks a bit like ENIAC — lots of wires soldered to a hardware encoder that triggers some bespoke audio software on a laptop.”

He added: “Pushing a button and getting a sound is one of the simplest, most enjoyable forms of interaction we could think of. The swearing is a bonus.”

The machine was first showcased at the Modern Toss Activity Centre at Latitude Festival in July 2011. See more close-up photos in Periodic Table of Swearing gallery and see the machine in action in the video below.

Periodic Table of Swearing from Clay Interactive on Vimeo