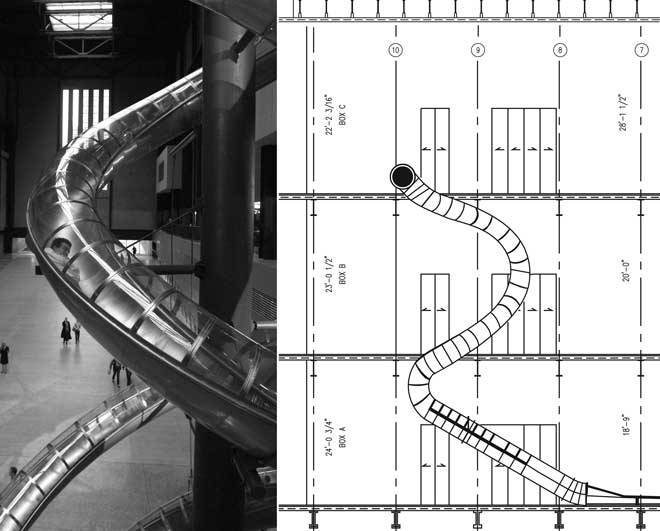 Left: A slide that artist Carsten Höller installed at the Tate Modern in London. Right: An architectural drawing of a similar slide, coming soon to the New Museum in New York.
Photo courtesy Tate Photography

It sucks ascending through the various floors of an art museum, only to reach the top and realize that not only is there no more art to appreciate, but you now face a long, lonely descent back to street level.

Wouldn’t it be better to slide? Yes, it would. And, thanks to an upcoming exhibit at the New Museum in New York, such a giddy descent is about to become reality: The museum is installing a 102-foot totally tubular slide that will run from its fourth floor to its second as part of its Carsten Höller: Experience exhibit, which focuses on the Belgian artist’s work.

The “alternative transportation system” will essentially turn museum-goers into letters being shuffled through a pneumatic mailing system (minus much of the pressure). The slide, a version of which was previously installed at the Tate Modern in London, is part of a collection of Höller’s work over the last 18 years. Those who check out the exhibit can also enjoy the artist’s Psycho Tank, which allows visitors to float in a sensory deprivation pool (fun!).

Check out “surveillance” video of the slide’s installation below. The Carsten Höller: Experience exhibit opens Oct. 26 and will be on view until Jan. 15, 2012.

Read 3942 times
Published in News Technologique-Tech News
More in this category: « Ice Cream Sandwich: A Deep-Dive Tour With Android's Chief Engineer Bland It Up: Copernican Theory Takes Edge Off Art »
back to top