Bland It Up: Copernican Theory Takes Edge Off Art 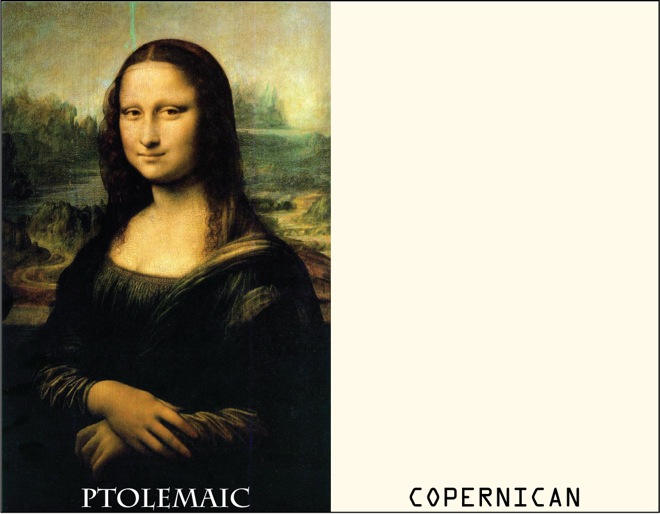 Copernicus reoriented the cosmos. But did he render art beige in the process? Yes, according to concept artist Jonathon Keats.

Copernicus revolutionized scientific and cultural history after proving that Earth was just another planet in a universe full of them. Conceptual philosopher and prankster Jonathon Keats has taken that Copernican thesis of astronomical mediocrity into the arts for his latest exhibit.

Opening Thursday at San Francisco’s Modernism Gallery, Keats’ multimedia clarion call for a Copernican revolution strips the arts down to their respective mediocrities. So long, singularity.

“In contrast to the traditional Ptolemaic masterpieces of past generations, Copernican art needs to be perfectly average,” the San Francisco-based Keats told Wired.com in an e-mail interview. “The challenge was to figure out what exactly ‘average’ means, since whatever characteristic you choose to average tends to slide everything else down the ends of the bell curve. Any philosophical or artistic exploration of averages inevitably descends — or ascends — into the absurd.”

That absurdity is on prominent display at Modernism Gallery. Keats’ exhibit shows paintings, music, sculptures, and even cuisine completely blending in — rather than standing out as artifacts for the ages. It’s a noble antidote to our anachronistic but nevertheless escalating demand for the unique, explained Keats.

“Though difficult to achieve, the recognition that there’s nothing special about us, that we’re essentially mediocre, can counterbalance our myopic destruction of society and environment,” he said. “Of course, what happens on our planet doesn’t make much difference in the great Copernican sweepstakes: Whatever we choose to believe about the cosmos, the universe will persist, and space-time will run its course. The paradox is that we need to be Copernican for our own sake here on Earth.” 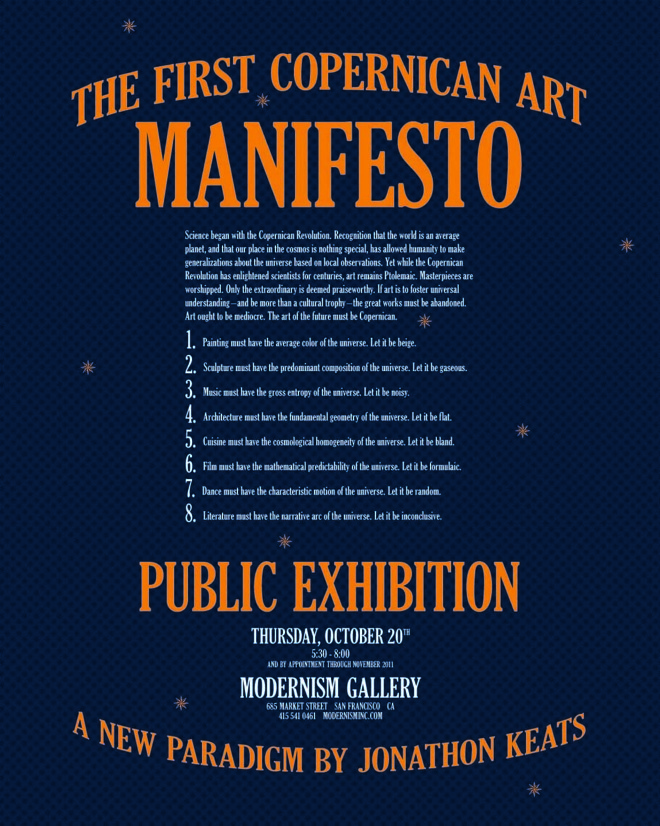 Jonathon Keats' eight-point Copernican manifesto clearly spells out how the arts can best achieve the average.

Keats’ latest concept art experiment wants to help lead us down the road to that necessary Copernican mediocrity. From its beige paintings and hydrogen sculptures to its entropic music (below left) and culinary anti-seasoning (below). Further guidance for architecture, dance, film, and literature is provided in Keats’ Copernican manifesto (above).

“My paintings are the average color of the universe as perceived by eyes adjusted to darkness, which technically has the CIELab coordinates 97.7, -0.5, 9. — in lay terms, beige,” Keats said. “My sculpture is hydrogen gas, the typical material composition of the universe. My music has the gross entropy of the universe — 2.6±0.3 x10^122 k, or approximately 25 percent of the total possible disarray. I’ve taken J.S. Bach’s ‘The Well-Tempered Clavier‘ (a Ptolemaic masterpiece if ever there was one) and randomized one quarter of its notes. In the realm of cuisine, where a Ptolemaic inclination toward unique flavors is on the upswing, I’ve developed a universal anti-seasoning, which can be added to any dish to make it as bland as our homogeneous universe.”

Keats encourages everyone, not just artists, to achieve the same on their own. Copernican artists should randomize the Beatles, create beige minorpieces, and even create simply average cuisine that no one will love nor hate. Efforts to take Copernican principles beyond the arts into disparate disciplines are also welcomed. In fact, Keats explained that Occupy Wall Street has already started making waves in Copernican finance.

“Think of Occupy Wall Street as a Copernican revolution in economics intended to supplant Ptolemaic banking and tax laws,” Keats said. “They’re proudly asserting their average-ness by proclaiming themselves to be the 99 Percent, broadcasting the typical situation of the average person and the deviant distribution of resources. I’d encourage 99 Percenters everywhere to paint out the symbols of Ptolemaic power with a fresh coat of Copernican beige. And to put some entropy into the ‘Star-Spangled Banner.’” 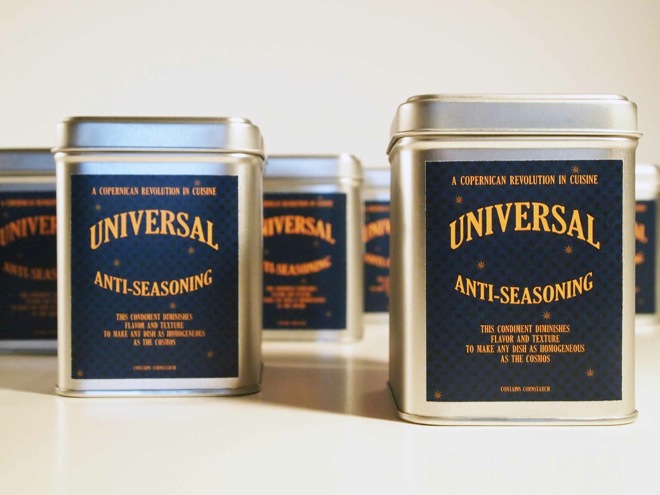 Need to spice down your cuisine? Try Keats' Copernican anti-seasoning at the Modernism Gallery.

Read 3239 times
Published in News Technologique-Tech News
More in this category: « Giant Slide Whisks Museum-Goers Through Carsten Höller Exhibit You Are Not Your Name and Photo: A Call to Re-Imagine Identity »
back to top