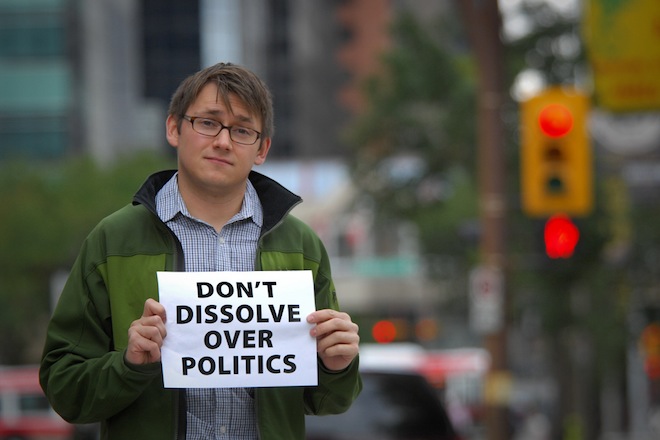 Though people like to believe their convictions are purely rational, a growing body of research links political differences to deep-seated physiological traits.

The latest such finding comes from a study of people who looked at gross images, such as a man eating earthworms. Viewers who self-identified as conservative, especially those opposing gay marriage, reacted with particularly deep disgust.

The study “suggests that people’s physiological predispositions help to shape their political orientations,” wrote the researchers, who were led by University of Nebraska-Lincoln political scientists Kevin Smith and John Hibbing. “Disgust likely has an effect even without registering in conscious beliefs.”

Published Oct. 19 in Public Library of Science One, Smith and Hibbing’s findings are the latest datapoint in a series of investigations into neurophysiological aspects of morality and, by extension, politics. Other researchers have found that conservatives seemingly tend to have a more rigid, structured cognitive style than liberals, who are more open to ambiguity; conservatives are also quicker to feel threatened. 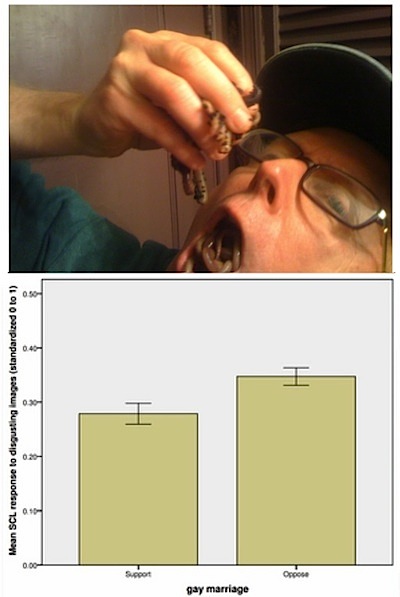 Above, an example of the type of disgusting image shown to test participants; below, differences in disgust response between supporters (left) and opponents (right) of gay marriage. Images: Smith et al./PLoS One

Disgust is especially interesting to researchers because it’s such a fundamental sensation, an emotional building block so primal that feelings of moral repugnance originate in neurobiological processes shared with a repugnance for rotten food. In questionnaire-based studies, people prone to deep feelings of disgust tend to lean conservative.

The latest study was designed to see if such survey-based reports reflected real-world reactions. Test participants — 27 female and 23 male residents of Lincoln, Nebraska, with an average age of 41, selected from a larger pool of 200 people given lengthy political surveys — were shown a series of disgusting and non-disgusting images. Electrodes on their skin measured subtle conductance changes, a standard indicator of emotional response.

In keeping with earlier observations, conservatives reacted with significantly deeper disgust than liberals. Feelings about gay marriage, an issue tightly bound to notions of purity, were especially predictive.

“It’s a great example of the increasingly sturdy bridge between biology and political science,” said Jonathan Haidt, a New York University psychologist who studies the relationship between disgust and morality.

Smith and Hibbing were careful to note their work’s limitations. Cause and effect isn’t clear; they suspect people gravitate to the political convictions that fit their feelings, but feelings could also be shaped by convictions. Neither is the effect all-encompassing: Even if physiology influences politics, it’s not going to explain every difference and every detail.

“The larger point,” they write, is “that certain political orientations at some unspecified point become housed in our biology, with meaningful political consequences.”

And while this might imply that partisan differences are irreconcilably rooted, the opposite could be true: Acknowledging the role of biology means appreciating that people who disagree with us may not simply be bad, or stupid, but influenced by different and ingrained habits of mind — as are we.

“This recognition could in turn diminish political hostility,” wrote Smith and Hibbing. “After all, if political differences are traceable in part to the fact that people vary in the way they physically experience the world, certitude that any particular worldview is objectively correct may abate, lessening the hubris that fuels political conflict.”

Read 4745 times
Published in News Technologique-Tech News
More in this category: « Video: 10 Years of Fires on Earth Seen From Space Steve Jobs Bio: Its 6 Most Surprising Reveals »
back to top