Next WoW Expansion Will Be All-Out Panda-Monium 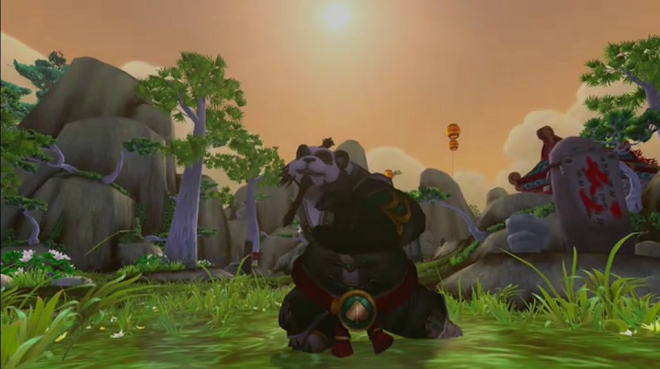 The next World of Warcraft expansion will star the Pandaren race.
Screengrab: Wired.com

World of Warcraft: Mists of Pandaria will let players play as the mysterious Pandaren, a race of humanoid pandas that Blizzard originally introduced several years ago as an April Fool’s joke for Warcraft III. Today, the ursine anthropomorphs are a series staple, making frequent appearances in World of Warcraft as well as brief cameos in other Blizzard games, like StarCraft II.

Diehard fans love these adorable pandas. You might say that by releasing this expansion, Blizzard is really Pandaren to its base.

The Warcraft maker also announced that it will begin to offer an annual subscription plan for the MMO, which can be paid for in monthly installments. For a limited time, anyone who signs up will receive a free copy of the hotly anticipated upcoming RPG Diablo III.

Mists of Pandaria will also introduce a playable Monk class to the popular massively multiplayer online game, as well as the land of Pandaria, a China-inspired country that Blizzard vice president Chris Metzen describes as a rather peaceful place — until the players come in and ruin everything.

Speaking on stage at BlizzCon, Metzen gave a brief introduction to the expansion pack, emphasizing that it will focus on the war between the game’s two main factions, rather than an external enemy.

“Red and blue are about to get it on,” Metzen said, “with a heavy ferocity that has not been seen since the days of Warcraft II.”

As has become custom for Blizzard, the developer did not give any indication as to when it will release World of Warcraft: Mists of Pandaria or Diablo III.

Read 3616 times
Published in News Technologique-Tech News
More in this category: « Steve Jobs Bio: Its 6 Most Surprising Reveals Vulcan's View: Eruption News and Volcanoes From Space for October 21, 2011 »
back to top