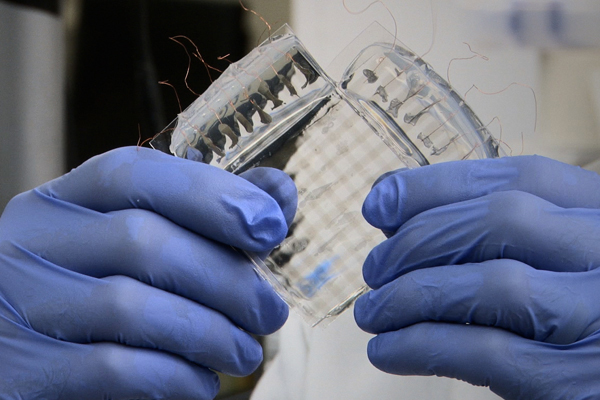 This transparent sensor can stretch to great lengths without getting deformed, all the while sensing pressure. Image: Stanford News

We’re used to tapping away at flat, glass-covered touchscreen devices like smartphones and tablets. A group of Stanford researchers have taken that capacitive touch concept and applied it to a completely new form factor, which could have wide-ranging applications in consumer technology, robotics and beyond.

The team created a transparent, super-stretchy sensor that can be used repeatedly without getting deformed, snapping back into shape after each use. The team hopes that their sensor could be used in medical applications like pressure-sensitive bandages, or even as an outer, skin-like layer to create touch-sensitive limbs or robots. Of course, it could also be used on touchscreen devices and computers.

Through spraying carbon nanotubes onto a layer of silicon and then stretching out the substance a few times, the nanotubes are essentially organized into “springs.” The “springs” can stretch in any direction, and be used to measure the force exerted upon itself over and over again without getting stretched out of shape.

The capacitive touch sensor works like this: There are two conductive parallel plates. When one or both are pressed, the distance between them gets smaller, increasing the capacitance of the sensor. That increase can be quantified and measured. In this case, the two conductive parallel plates facing one another are composed of nanotube coated-silicon, with a middle layer of silicon that stores charge.

The stretchy sensor can detect a wide array of touches, according to Darren Lipomi, a postdoctoral researcher on the team. That means from something as light as a “firm pinch between your thumb and forefinger” to double the pressure of a stamp of an elephant’s meaty foot.

So far the sensor isn’t as sensitive as previous projects the Stanford team has worked on (one of which was so responsive that the pressure exerted from a 20 milligram bluebottle fly carcass was well above what it could detect). However, the researchers can eventually use those previous techniques to calibrate this stretchy capacitive sensor. “We just need to make some modifications to the surface of the electrode so that we can have that same sensitivity,” said Zhenan Bao, associate professor of chemical engineering at Stanford.

Check out the video below to see researchers manipulating, testing and talking about their stretchy, skin-like capacitive sensor.