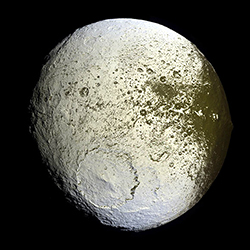 And, as it turns out, one of Saturn’s most interesting moons. When the Italian-born astronomer first trained his telescope on the satellite, what he saw was only part of Iapetus (pronounced “eye-AP-i-tus” and named for the son of Uranus and Gaia in Greek mythology) — the bright part. The rest of the moon was obscured from his view because of its darker hue.

By continuing to observe Iapetus over a span of several years, and with the aid of a better telescope, Cassini rightly concluded that the moon has both a light and a dark hemisphere.

The two-toned coloring is unusual, and scientists have spent the intervening centuries trying to figure out the reason for it. Even with close-up images obtained from the Voyager and Cassini probes (the latter passed within 1,000 miles of Iapetus in 2007), the answer remains elusive. Two main theories exist:

Other theories, including some kind of cosmic collision, remain possible.

The moon itself is composed mostly of ice and is heavily cratered and oddly shaped: It bulges in the middle, so is neither typically spheroid or elliptical.

Image: This false-color mosaic shows the entire bright hemisphere of Iapetus. The region appears heavily cratered, particularly in the north and south polar regions. Near the top, numerous impact features are visible, including the craters Ogier and Charlemagne. (NASA)

Read 4016 times
Published in News Technologique-Tech News
More in this category: « Beyond Google's Reach: Tracking the Global Uprising in Real-Time Runnin' Things »
back to top