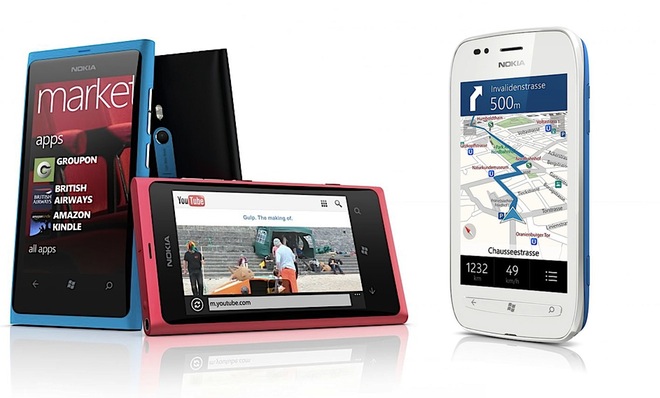 The Lumia 800 (left) and 710 both run Window Phone Mango, but only one does it in style

Nokia has announced “the first real Windows Phone” at a special event in London today. The Lumia 800 looks almost identical to the Nokia N9, apart from the fact that it’s running Windows Phone Mango and not the short-lived MeeGo OS.

The Finnish company also introduced the second, slightly lower-specced Lumia 710, also running Windows Phone, along with a smattering of Series 40 handsets — dubbed Asha — which are dumb (“feature”) phones pretending to be smartphones.

We know by now what Windows Phone Mango looks like, and we’ve been impressed by its simple, modern good looks and truly original tile-based UI. But until now, there really hasn’t been a handset to get people excited. And so, the hot-looking Lumia 800 might actually be “the first real Windows Phone.”

So the handsets are pretty much state-of-the-art for today’s smartphone market, and the prices are also pretty competitive. The 800 is shipping now to stores in the U.K., France, Spain, Germany, Italy and the Netherlands and will cost €420 ($585). The 710 will cost €270 ($376) and ship to Hong Kong, India, Russia, and Taiwan this year. Next year (2012) will see it reaching further abroad, presumably to wash up on U.S shores at some point.

The Lumia 800 has the potential to be huge, a throwback to the times of the Nokia 3210 and 3310. And it should certainly please the mass market more than Android handsets, with their inconsistent and ugly UIs, their terrible battery life and their laggy touch response. Good luck, Nokia!