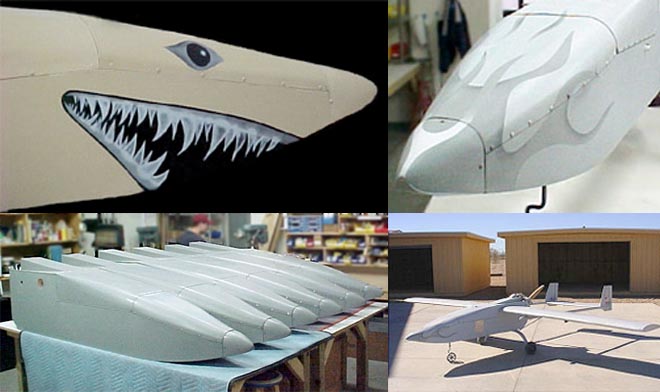 Come spring, there’ll be a new drone in the Special Ops arsenal of annihilation. Call it … the Robotic Russian Doll of Death.

And it’s wild: essentially one deadly drone shoved inside a bigger, more benign one. The petite, 13-foot Tigershark drone, already used for surveillance and reconnaissance, will be outfitted with an even smaller drone — developed by Air Force researchers under the Precision Acquisition and Weaponized System program — that doubles as a warhead. The baby drone would detach from its Tigershark mother and relay real-time video to ground support as it was directed toward a target and then detonated on impact.

It’s an idea that U.S. Special Operations Command (SOCOM) has been interested in pursuing for years. In 2007, SOCOM’s Col. Jim Geurts expressed an urgent need for smaller, more targeted weaponry, so that “the guy in the truck evaporates and the two trucks next to him don’t get blown out and the windows in the house don’t get blown out.”

But now, it finally seems for real. A $12 million design and assembly effort is supposed to be done in the Spring of 2012. After that comes testing at Eglin and at the Army Yuma Proving Ground in Arizona. Then, if all goes well: Afghanistan.

Executives at Navmar, however, claim they don’t know a thing about their drone-within-a-drone’s potential deployment.

“I don’t know where you got that information; you know more than I’m allowed to tell you,” company president Tom Flenery told Danger Room when we reached out for more information. “We’re not involved in that — we just sell them the planes.”

Several military branches and drone companies are working on teeny-tiny robotic killers. The Acturus drone, which is the aerial equivalent of a compact car and carries a 10-pound missile, is currently undergoing military tests, and earlier this year the Army doled out $4.9 million for “rapid fielding” of AeroVironment’s Switchblade suicide drone, essentially a tiny flying robot with a death wish.

The logic behind these teenier missiles and self-detonating drones (sometimes inside bigger drones!) is simple: A smaller boom and a more targeted explosion — right through the car windshield, for example — keeps unnecessary damage to a minimum.

“Because of the small size of the warhead, it would have pinpoint precision for the target,” Chyau Shen, a Navy program manager for surveillance systems, said. “And would not cause harm to neutrals or civilians near the target.”

Sounds like a worthy goal. But Navmar was not exactly keen to discuss their mini-missile combo. When Danger Room reached out to the firm via e-mail, company execs suggested — via ongoing reply-all fail — that they were intent on avoiding any collateral damage of their own.

“Where did this come from?” Anthony Madera, Navmar’s VP of engineering, wrote in an e-mail. “I don’t think it’s smart to get too much visibility. Do we want undesirable sources targeting us?”

Not that Danger Room keeps our own cache of Russian Doll Death Drones, of course.