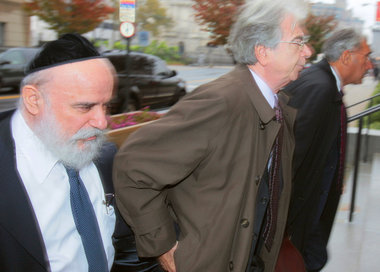 Levy Itzhak Rosenbaum, 60, of Brooklyn (left) is led by his attorneys Ronald Kleinberg (center) and Richard A. Finkel (right) into the Clarkson Fisher Federal Courthouse in Trenton today to plead guilty for his role in trafficking human kidneys. (Tony Kurdzuk/Star-Ledger)

TRENTON — The price was steep. As much as $160,000 to secure a donor willing to give up a human kidney for transplant.

And Levy Itzhak Rosenbaum — who told neighbors in Brooklyn he dabbled in construction and real estate — bragged on surveillance recordings that he had participated in many such black market deals.

Today, the 60-year-old Israeli pleaded guilty in federal court to helping an FBI informant procure a kidney as part of an elaborate federal sting. At the same time, he admitted arranging transplants for three other New Jersey patients with failing kidneys — all of whom underwent surgery in out-of-state hospitals after paying Rosenbaum. None of the patients or hospitals was named, nor were they charged.

It marked the first time in this country anyone has ever been convicted for brokering illegal kidney transplants for profit.

The case served as one of the more bizarre chapters of the sweeping federal sting that led to the arrests of 46 people on charges of money laundering and political corruption in July 2009 — a case that included three mayors, two legislators and more than 20 candidates for public office who were charged with taking cash bribes to help green-light questionable development projects.

Separately, five Orthodox rabbis from Brooklyn and the Jersey shore were charged with laundering millions of dollars through various religious charities.

At the center of the three-year investigation was failed Monmouth County real estate investor Solomon Dwek, who began secretly cooperating with prosecutors after he was caught passing a $25 million bogus check at a bank drive-through window in an unrelated Ponzi scheme.

Rosenbaum’s connection to the high-profile sting had been a mystery when the investigation first came to light. But it was later revealed Dwek had long known of the kidney broker, who was familiar in Brooklyn as the “go-to” guy with connections for those with the means who did not want to wait for a suitable donor organ, or did not qualify to be placed on a transplant list.

According to criminal complaints in the case, Dwek set up Rosenbaum by claiming a desperately ill uncle of his secretary needed a kidney transplant, and that he was willing to pay for one. The “patient” was fictitious and Dwek’s supposed secretary was actually an FBI undercover agent.

Transcripts of surveillance recordings revealed a stark business transaction. In February 2008, Dwek drove to Rosenbaum’s home in Flatbush. He was accompanied by FBI agent Jessica Weisman, who played the part of his secretary and was later identified in court as part of a separate trial connected with the sting.

Dwek told Rosenbaum he wanted to arrange a kidney transplant for his secretary’s “Uncle Teddy.” The cover story was that her uncle had polycystic disease, a genetic disorder leading to the growth of cysts that eventually fill with fluid.

In the surveillance transcripts released as part of a criminal complaint, Rosenbaum explained the proposed transaction in detail.

“One of the reasons it’s so expensive is because you have to shmear all the time,” Rosenbaum said on the transcripts, referring to money paid under the table to everyone involved in the deal. “I take care of (the donor) after; after the surgery also… I place him somewhere. You have to babysit him like a baby because he may have a language problem; maybe not.”

He said the donors, all of whom came from Israel, got $10,000 for giving up one of their kidneys. “There are people over there hurting,” Rosenbaum explained.

The kidney sale was never allowed to proceed beyond an initial deposit paid by Dwek.

But in a proceeding today before U.S. District Judge Anne E. Thompson in Trenton federal court, Rosenbaum, in a dark suit and a heavy accent, acknowledged not only taking Dwek’s deposit, but also arranging three other transplants on behalf of New Jersey residents that took place in December 2006, September 2008 and February 2009.

In questioning by assistant U.S. Attorney Mark McCarren, Rosenbaum said he was paid between $120,000 and $140,000 by the recipients. “The son told me the father has kidney failure,” Rosenbaum told the court of one transaction. “I helped him.”

His attorneys, Ronald Kleinberg and Richard Finkel of New York, said all of the recipients sought Rosenbaum’s assistance, and the transplant surgeries occurred in U.S. hospitals.

“Each of the recipients was suffering from kidney failure, was enduring the pain and serious health dangers associated with kidney dialysis and was facing death unless a transplant was arranged,” the attorneys said in a statement.

“A black market in human organs is not only a grave threat to public health, it reserves lifesaving treatment for those who can best afford it at the expense of those who cannot,” he said.

According to the U.S. Attorney’s office, Rosenbaum is the first person ever convicted under a 1984 law prohibiting the black market sale of human organs from paid donors.

He faces up to five years in prison on each count of the four-count information, and $250,000 in fines when he is sentenced in February. He also faces deportation and agreed to forfeit the $420,000 he received to broker the four transplants.