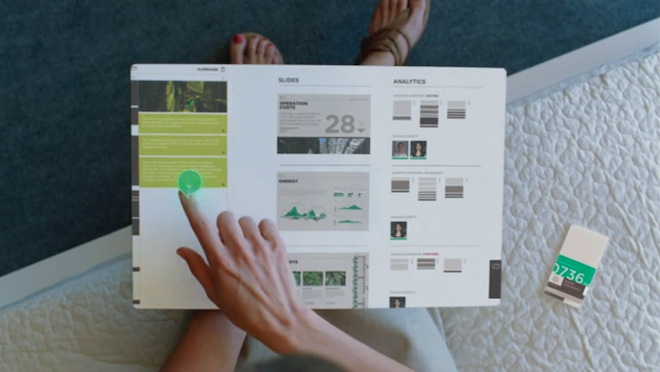 Just relaxing with a paper-thin tablet and smartphone, at some point in the theoretical future. Image: Microsoft

How do you see yourself living a decade from now? For many of us, it’s difficult to picture how technologies will change and evolve in that time span. But for some folks at Microsoft, it’s their job to figure out where technology is headed, and how to make it happen. And a recently released video shows just what they envision.

The video, titled Productivity Future Vision, shows us a world much like our own, but cooler. Microsoft sees touchscreens and holographic displays dominating our daily experiences. Flat surfaces of any kind are transformed into useful, interactive displays as well.

“The video explores what productivity experiences might plausibly look like five to ten years in the future,” David Jones, director of Microsoft’s Envisioning Team, told Wired.com in an interview. The concepts presented in the video don’t necessarily communicate plans for future Microsoft products, though.

In an interview with GeekWire, Microsoft GM of technical strategy Chris Pratley said, “It would be relatively trivial to do a kind of Hollywood thing, where you just say what would be cool, and you whip it up and put it on the screen. But everything in the video, we could footnote everything about where it’s coming from, who’s working on it, why we think it’s going to happen.” Essentially, Microsoft’s video isn’t just a bunch of hot air.

The video was produced by the Microsoft Office team, and is a follow-up to a “Microsoft 2019? video that the company created in 2008. It builds on several themes established in the earlier video, even using a few of the same actors.

Microsoft heavily emphasizes how thin they think future displays will be. Smartphones, tablets and desktop monitors all measure in at wafer-like thicknesses, slabs of white, blank slates that images and video can be pawed, swiped and manipulated.

On-screen images can be holographic, so tilting the angle of your phone, for instance, could show you a 3-D rendition of a bar graph. And images aren’t confined to the dimensions of the touchscreen you’re using.

And the technology goes even further in the kitchen: A tap on the refrigerator door reveals its contents, and tapping on a food item can bring up recipes relating to that item.

“Many of the technologies in the video, such as stereoscopic-3D displays … speech recognition, real-time collaboration, and data visualization are already part of products available today,” Jones told Wired.com. The video just expands on their capabilities to where they could be sometime in the next decade.

There’s one big thing that’s missing from the piece: Paper. A woman peruses a magazine on a large legal-pad sized tablet. A child seated at a kitchen table draws and plays a game on another touchscreen device. A dad moves a virtual Post-It note from one spot to another on an interactive wall calendar. Hand gestures pass data from a slate to the countertop. For all intents and purposes, papyrus is virtually extinct.

There are also a number of user experience aspects in the video that would also make our computing experiences more comfortable. For example, around the 3:30 mark, a man at a desk opens up a video (or video chat) with a woman, and as he scoots his chair back, her image enlarges proportionately. This could feasibly be accomplished using facial recognition and some IR sensor technology to measure the distance of the face to the screen.

“In the future, productivity software will work to extend our human capabilities, transitioning from the role of a passive tool to that of an active assistant,” Jones said.

And Microsoft isn’t the only one who’s released conceptual videos of what the future could be like. In the late 80s, Apple famously released a set of videos illustrating a concept called Knowledge Navigator, a concept we’re moving closer to these days with Siri and touchscreen iOS devices.

“Microsoft understands the vision of what consumers need in the post-PC era. What they need to demonstrate is that they can execute this vision before their competitors do,” Forrester analyst Sarah Rotman Epps said of the video via email.

The video is below if you want to check it out. Would you enjoy this world? Is there anything missing? Sound off in the comments.