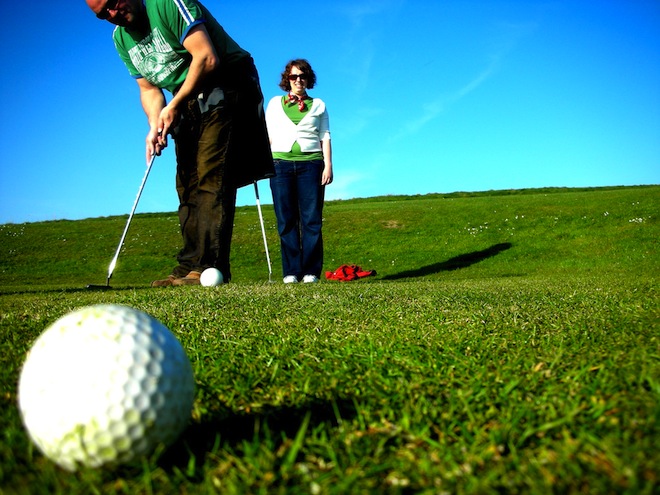 How can you make people better at sports? Tell them they’re using equipment that previously belonged to a professional athlete. No, really. A new study finds that golfers significantly improved their putting ability when they believed the putter they were using belonged to a celebrity golfer.

The research was inspired by a passage in the 1953 book Zen in the Art of Archery, where author Eugen Herrigel describes shooting badly, handing his bow to his teacher for a few shots, then getting it back and shooting better: “It was as if the bow let itself be drawn differently, more willingly, more understandingly.” Undergraduate Charles Lee of the University of Virginia in Charlottesville (UVA) thought this sounded like an interesting psychological phenomenon. “Charles brought it to me and we said, ‘Okay, well, why don’t we do this same thing but using a golf paradigm and actually quantify it?” says Sally Linkenauger, then a Ph.D. student at UVA and now a postdoc at the Max Planck Institute for Biological Cybernetics in Tübingen, Germany.

Lee and Linkenauger tracked down 41 undergraduate students who were avid golf players. Each subject came in to try their hand at putting on a small mat. Half of the students were told they were using a really nice putter. The other half were told—untruthfully—that it had previously belonged to Ben Curtis, a player on the PGA Tour known for his expert putting. “We actually bought an extremely expensive, top-of-the-line putter, the same kind that Ben Curtis actually uses,” Linkenauger says. All the undergraduate golfers knew who Curtis was.

Out of 10 putts, students who were told the putter had a celebrity aura sank, on average, one and a half more golf balls, the team reports this month in PLoS ONE. “If I could tell you I could increase your ability by a putt and a half for 10 putts, a lot of golfers would be ecstatic about that,” Linkenauger says. The experiment doesn’t show why this happens. It could be a placebo effect, whereby something works because you think it’s going to, or the golfers might have done well because they were thinking about Curtis and his excellent putting skills.

In sports, confidence is a big deal, says Mark Beauchamp, a sport and exercise psychologist at the University of British Columbia in Canada. Generally, when people are more confident in their ability to perform a skill, they do better. “If someone has confidence in this putter’s ability to help them perform,” he says, “that might bolster their own confidence.”

That confidence could come from a belief in “contagion,” the idea that an object somehow absorbs the qualities of its previous owner, says cultural psychologist Paul Rozin of the University of Pennsylvania. For example, in surveys, people say they wouldn’t wear a sweater worn by Hitler even though they know evil doesn’t stick to objects. “But positive contagion is something that we find is not present in a lot of people,” Rozin says—some people would like to wear Mother Teresa’s sweater or use Einstein’s pencil, whereas other people don’t care. The golf study is nice, he says, “because they actually used a behavior, they used performance” to show that positive contagion works.