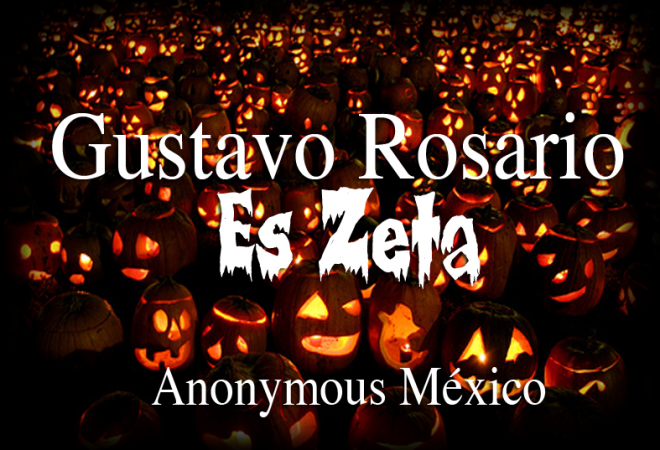 A ruthless campaign of killing, extortion and kidnapping by Mexico’s powerful Zetas drug cartel has created plenty of enemies, from the Mexican government to paramilitary vigilantes to rival cartels. But now the Zetas have a new adversary: the hacker collective Anonymous.

In a video uploaded Oct. 6, an Anonymous spokesperson said that unless the Zetas release one of the group’s members, the group will reveal the photos, names and addresses of Zetas-affiliated cops and taxi drivers. (The member was allegedly kidnapped in the western coastal city of Veracruz during an “Operation Paperstorm” demonstration.) Anonymous also threatened to out journalists accused of “crapping on honest authorities like the army and the navy,” the spokesperson said.

“For the time being, we won’t post photos or the names … of the taxi drivers, the journalists or the newspapers nor of the police officers, but if needed, we will publish them including their addresses, to see if by doing so the government will arrest them,” the spokesperson added.

Anonymous started out as a decentralized network of online griefers. But they’ve grown increasingly political, targeting websites ranging from Visa and Mastercard (for their alleged financial blockade of WikiLeaks) to a consultancy firm linked to the U.S. military. In October, they took aim at the underground child pornography network Lolita City, and hackers linked to the group leaked personal information from the servers of the International Association of Chiefs of Police and the Boston Police Patrolmen’s Association. Perhaps most importantly, Anonymous has provided support to the Occupy movement.

Last week, Anonymous followed up its threat to the Zetas by defacing the website of former Tabasco state prosecutor Gustavo Rosario Torres, accused by anti-crime activists three years ago of discussing a $200,000 cocaine deal with a deputy on audio tape. With a Halloween background, a message splashed above the group’s signature on Rosario’s homepage read: “Gustavo Rosario is Zeta.”

This wasn’t the first time Anonymous weighed in on the shady and rumor-filled world of Mexican political corruption. One month ago, the group launched a distributed denial-of-service attack on the state of Veracruz’s official website following speculation the recent election campaign of Veracruz governor Javier Duarte received funding from the Zetas.

Revealing Zetas associates, however, is a different matter than flooding a state website. And the Zetas have a history of making their online critics pay.

In September, the Zetas hanged two people from a pedestrian overpass in the border city of Nuevo Laredo with threats against bloggers written on a nearby banner. A week later, a contributor to social media site Nuevo Laredo en Vivowas found decapitated.

According to private intelligence firm Stratfor: “Loss of life will be a certain consequence if Anonymous releases the identities of individuals cooperating with cartels. Whether voluntarily or not, cooperating with criminal cartels in Mexico comes with the danger of retribution from rival cartels.”

This is a problem. At the very least, it’s worth noting that taxi drivers working as lookouts or mules for the cartels does not mean the drivers do so willingly. As targets for extortion, exposing their identities could mean deadly reprisal attacks, such as what occurred during a wave of violence in the resort city of Acapulco in February that left a dozen taxi drivers and their passengers dead — some decapitated by machete-wielding assassins as their cars were set ablaze.

Even worse, provoking the Zetas could lead to further attacks against social media users unrelated to Anonymous.

“Anonymous activists can threaten to reveal information about cartels or launch cyberattacks,” Stratfor says. “But even if the cartels cannot track down the individuals directing cyberattacks or releasing information, the cartels will continue to commit acts of violence meant to warn the online community about such activities.”

In other words, if Anonymous follows through (assuming they’re not just bluffing) then writing about the drug war could become even more dangerous for Mexican bloggers — and wearing a Guy Fawkes mask on a Mexican street might just become a death warrant.