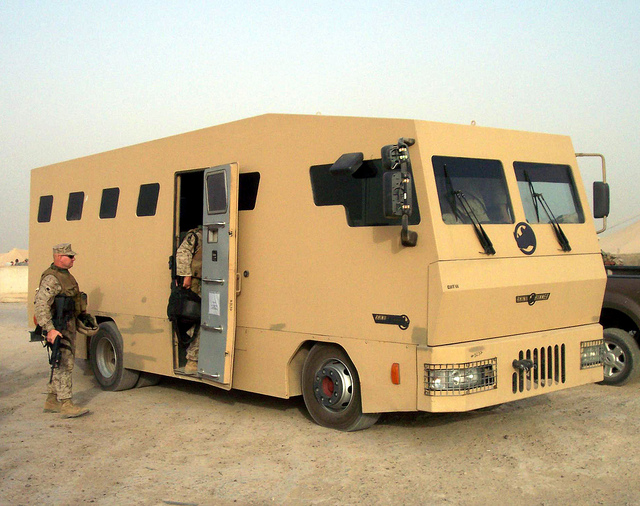 At least five U.S. troops and eight U.S. civilians in Kabul are dead on Saturday after a Taliban bomber targeted the lightly-armored bus transporting them through the Afghan capitol.

While details are still sketchy, the Taliban attack shows sophistication. The bus, known colloquially as a “Rhino,” is a slow transport vehicle built to withstand small arms fire. Its hull is V-shaped, like a Mine Resistant Ambushed Protected (MRAP) vehicle, so it can survive driving over a homemade bomb.

But insurgents evidently spotted two vulnerabilities with the Rhino. First, unlike troop convoys or patrols, Rhinos travel along a set, predictable route. Second, as ABC News notes, the buses are not built to survive a suicide car bomb detonating along its side. And the Rhino was reportedly escorted by a convoy of thickly-armored MRAPs, which indicates that the insurgents understand it to be the less-secure vehicle.

Many Americans who have been to Iraq over the last decade are familiar with the Rhino. For years, it transited troops, contractors, diplomats and journalists along Route Irish, the airport road — once considered the world’s most dangerous — connecting the massive Camp Victory constellation of bases with the Green Zone.

Riding in the Rhino in Iraq meant wearing body armor and listening to a non-commissioned officer bark safety instructions about how to survive in the event of a bomb attack or ambush that disabled the vehicle. It also often meant staying awake long past midnight to secure a ride, thanks to the vehicle’s somewhat unpredictable schedule.

The attack carries a lot of symbolism. It is perhaps the most bloody assault on Americans in Kabul of the entire decade-long war. It occurred in the capital, which the previous U.S. commander, David Petraeus, often boasted was an inhospitable environment for the Taliban. (“Touch wood, but security in Kabul has been really quite good,” Petraeus told Danger Room in August 2010.) And it took place the day after the Pentagon released a report to Congress claiming violence in Afghanistan has dropped for the first time since 2006.

It isn’t yet clear if the NATO command in Afghanistan will vary the routes for the Rhinos. It may not be practical, since the vehicles exist to facilitate routine transportation. But retired Army officer Tim Matthews reminds in a tweet that snipers also helped protect Rhino transit in Iraq. It’s unclear if snipers cover Rhinos in Kabul.

It also remains to be seen whether the attack will change the rules NATO sets for U.S.-allied troops to drive through Afghan cities and villages. Since 2009, the counterinsurgency strategy in place has placed a premium on giving Afghan drivers the right of way, something that has sometimes sat uneasily with soldiers and marines caught in the teeming capitol’s tense traffic snarls.

Read 2925 times
Published in News Technologique-Tech News
More in this category: « Creditor Moves to Dismantle Copyright Troll Righthaven 10 Years of iPod Ads: From Techie to Sassy »
back to top