The Crisis That Hit Physics 100 Years Ago 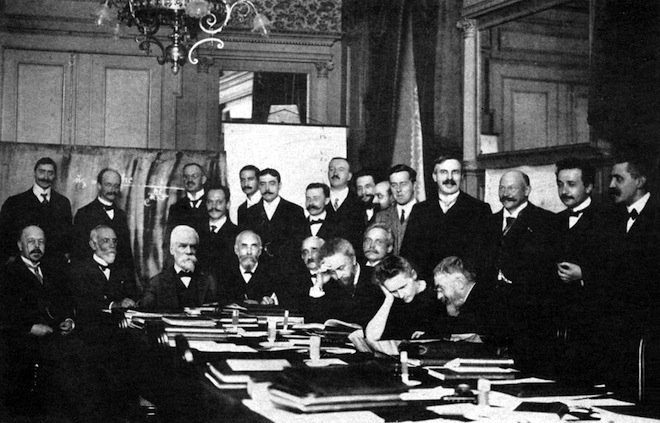 One hundred years ago, the greatest scientific minds of Europe met to address a perilous state of affairs. During the previous 20 years, curious scientists had uncovered new phenomena — including X-rays, the photoelectric effect, nuclear radiation and electrons — that were rocking the foundations of physics.

While researchers in the 19th century had thought they would soon describe all known physical processes using the equations of Isaac Newton and James Clerk Maxwell, the new and unexpected observations were destroying this rosy outlook. Leading physicists, such as Max Planck and Walther Nernst, believed circumstances were dire enough to warrant an international symposium that could attempt to resolve the situation.

It was the start of the quantum revolution.

Reverberations from this meeting are still felt to this day. Though physics may still sometimes seem to be in crisis, with researchers yet to find the Higgs boson and lacking a complete understanding of dark matter and dark energy, what we do know about these mysteries is only possible thanks to the foundations laid down at the first Solvay Council.

From Oct. 30 to Nov. 3, 1911, 18 luminaries came together as part of the invite-only conference in Brussels, Belgium known as the Solvay Council. Funded and organized by the wealthy chemist Ernest Solvay, the guest list is an impressive collection of top scientists from the time.

Along with Max Planck, often called the father of quantum mechanics, there was Ernest Rutherford, discoverer of the proton, and Heike Kamerlingh-Onnes, discoverer of superconductivity as well as the chemist Marie Curie and mathematician Henri Poincaire. The youngest member of this group was a 32-year-old Albert Einstein.

As scientists sometimes tend to do, the assembled members spent their time arguing about their field.

“The congress in Brussels resembled the lamentations on the ruins of Jerusalem,” Einstein later wrote to his friend, the engineer Michele Besso. “Nothing positive came out of it.”

The “temple” whose destruction many of the researchers were lamenting was the theories of classical physics, which had dominated scientific thinking in the previous century. Classical mechanics had managed to describe the movement of the planets, the behavior of electricity and magnetism and the relationship between solid, liquids and gases. But newly observed phenomena were pointing to problems. Light, for instance, had been heretofore described as a wave yet some experiments were suggesting this was an inadequate model.

Einstein himself was firmly in favor of the new tide, the way of quantum mechanics. Based on a theory of Planck’s, he advocated for the then-radical idea that light could behave as both a wave and a particle (or quantum). While we now know such a position to be true, observations at the time were not strong enough to wholeheartedly support this conclusion. It would not be until the 1920s that particles of light would be called photons.

Proceedings from the Solvay Council show how different physicists’ worldview was from our modern understanding. The gathered members “probably all agree that the so-called quantum theory is, indeed, a helpful tool but that it is not a theory in the usual sense of the word, at any rate not a theory that could be developed in a coherent form at the present time,” wrote Einstein.

At the time, theories describing light quanta and particle-wave duality had no rigorous experimental justification. Many of the scientists at the conference likely still believed in the now-outdated concept of a luminiferous ether, which supposedly was the medium through which light waves traveled, just as water waves travel through the ocean.

Einstein took issue with the conservatism of his fellow conference goers. Planck, he wrote, “stuck stubbornly to some undoubtedly wrong preconceptions,” while Poincare “was simply negative in general, and, all his acumen notwithstanding, he showed little grasp of the situation.”

Despite its goals, the 1911 meeting accomplished little. At its conclusion, Ernest Solvay addressed the scientists, saying, “In spite of the beautiful results achieved at this congress, you have not solved the real problems that remain at the forefront.” It would take at least two decades before experimental evidence and scientific debates firmly established quantum mechanics as a true theory.

But this first conference led to Solvay establishing an annual meeting for leading scientists to gather and discuss the issues of the day. The famous Fifth Solvay Conference in 1927 saw Einstein sparring once again with attendees, though this time with Niels Bohr and Werner Heisenberg about how quantum mechanics had gone too far and reduced the behavior of subatomic particles to probabilities. (“God does not play dice with the universe,” Einstein supposedly declared.)

Read 1958 times
Published in News Technologique-Tech News
More in this category: « Multiple Intelligences: What Makes a Smart TV Smart? Game|Life Podcast: Getting Blown to Bits on the Battlefield »
back to top