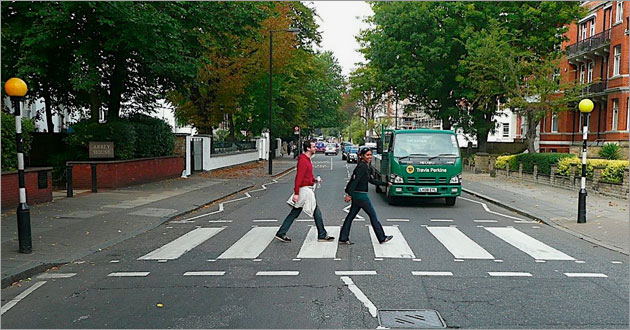 Postwar Britain had only 10 percent of its current road traffic, but fatalities were mounting. The typical pedestrian crossing was marked with nothing more than metal studs in the road: easy for pedestrians to see, but difficult for the motorist. By the time a driver felt the bumps under his tires, it was usually too late to stop or slow down.

The government’s Transport Research Laboratory ran visibility experiments on new types of crossings, using model roads at 1/24 scale (a half-inch to the foot). The lab then tested a variety of designs at a thousand locations starting in 1949. Broad black and white stripes had the most visual impact.

The new striped crossings were made the legal standard in Britain and widely introduced in late 1951, starting at Slough (The name rhymes with cow, not slow, and the borough is the putative location of the original BBC version of the TV comedy The Office.)

Jim Callaghan, Member of Parliament (and later prime minister), visited the lab in 1948 and is sometimes credited with first noting the crossing’s resemblance to a zebra. Despite Callaghan’s saying in 1951 that he didn’t remember doing that, no one else has ever claimed credit, and the name zebra crossing caught on.

Enamored of the moniker, Britain’s Ministry of Transport called forth animal cognates for subsequent improvements:

Cities around the world have been gradually adopting the crosswalk of a different stripe. The old-fashioned, two-stripe crosswalk (with only its borders marked by full-length stripes perpendicular to the direction of traffic) cannot be seen by motorists from farther than 100 feet or so away. At 30 mph, that’s about 2 seconds.

Zebra-striped crosswalks can be seen from greater distances. An empty crosswalk informs drivers that pedestrians might enter there. And pedestrians who are crossing the street are highly visible as they move against the striped background.

The Beatles brought international fame to the zebra crossing in 1969 with the album cover for Abbey Road. The much-parodied image also brought wide renown to Abbey Road Studios, where the album was recorded.

Beatles producer Sir George Martin has a heraldic badge of a zebra carrying an abbot’s crozier. His coat of arms features a crest of a martin holding a recorder under its left wing, a Latin motto that could be translated as “Love is all you need,” and a shield with three beetles. Go figure.

Photo: Tourists from around the world visit London’s Abbey Road to follow the footsteps of the Beatles in this famous zebra crossing. Then-Wired.com copy editor Jeff Hunt and his then-girlfriend (now wife) Tara Ramroop made the pilgrimage in 2008. (Courtesy Tara Ramroop)