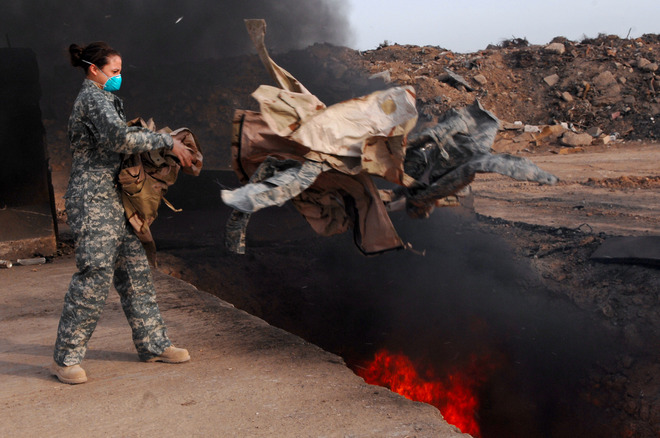 In a 2010 study of 80 soldiers who struggled to run two miles, half of them were huffing and puffing because of undiagnosed bronchiolitis.

And the feds have no idea why.

The military’s widespread use of open-air burn pits — massive heaps of Styrofoam, human waste and plastic water bottles, in flames around the clock — seemed to be the most obvious answer.

But results of a study published today by the Institute of Medicine, and commissioned by the Department of Veterans Affairs, are frustratingly inconclusive — largely because the military didn’t collect adequate data for researchers to do their jobs.

The team set out to determine whether the burn pits used to incinerate waste at military bases in Iraq and Afghanistan were culpable for the increased prevalence of respiratory, cardiovascular and neurological ailments afflicting recent veterans. But what they know after all that research is essentially what they knew at the study’s outset. First, that more and more troops are complaining of chronic health problems. And second, that the air quality in both combat zones was pretty awful to begin with.

Some troops are so sure that burn pits caused their illnesses, they’ve already sued the contractors responsible for them: Close to 1,000 are currently in litigation against megaliths KBR and Halliburton, which were charged with overseeing some pits.

But burn pits aren’t the only suspect: With dust storms a common occurrence, soldiers spent plenty of time choking on cloudy air in Iraq and Afghanistan, which the report notes might be enough to cause “long-term health effects.” Not to mention that much of the dust was laden with neurotoxic elements, including chromium and iron.

Researchers studied air samples collected by military officials at Joint Base Balad between 2007 and 2009. They detected 51 chemicals and a plethora of particulate matter (caused by, for example, dust and exhaust fumes). The toxins and particulates found in the samples have been linked to, among others, the following health problems: Cardiovascular disease, asthma, adrenal, liver and kidney failure, birth defects, cancer, anemia and decreased function of the central nervous system.

“The air in the areas tested contained more pollutants — sometimes much more — than U.S. air standards,” Dr. David Tollerud, lead researcher on the study, told reporters. “What they inhaled was comparable to that of very polluted urban environments around the world.”

In other words, troops were living in an environment akin to the heart of Mexico City — if Mexico City was also burning heaps of synthetic goods and human waste adjacent to residential areas and workplaces. So troops should worry about illness. But is the risk reserved for those who worked close to a burn pit? That question’s a little tougher to answer.

“We can’t dismiss the potential of the burn pits themselves as being the cause of health effects,” Dr. Tollerud, who was also a key researcher in establishing Agent Orange’s health threats, said. “But exhaust from automobiles, jet emissions, and other pollution, not to mention dust storms, could also be involved.”

That said, the air samples did contain dioxins, the same chemicals found in Agent Orange, the herbicide now blamed for widespread illness among Vietnam veterans.

And much like Agent Orange — which the VA only this past year acknowledged as the culprit for veteran’s health problems — it seems the confusion surrounding this generation’s long-term health conditions will take decades to resolve — if it ever is.

The report notes that researchers were hampered by “a lack of data” collected by the Department of Defense. Nobody kept track of what was burned, when, how much, or in what proximity to soldiers. And now that the military has shut down all of the open-air pits in Iraq, getting relevant air samples is impossible.

Despite this dearth of data, the military somehow managed to release two of their own reports on air quality earlier in the decade, and both concluded that any health risks from burn pits fell within an “acceptable” range.

The IOM committee isn’t so sure: They’ve suggested another, long-term study that follows troops — especially those who’d been deployed at Balad — and tracks incidence of respiratory problems, neurological impairment and cancer, which often develops later in life. In other words, soldiers will just have to wait until they get sick to help scientists figure out why.

Read 2352 times
Published in News Technologique-Tech News
More in this category: « Confessed Miley Cyrus Hacker Sentenced to Three Years Probation Get On Board With Tarp Surfing »
back to top