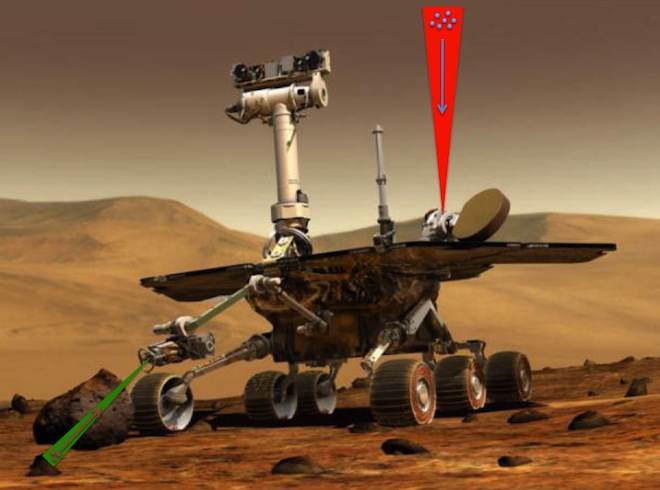 NASA is exploring ways to use tractor beams in future robotic probe missions. The agency has recently awarded a team of engineers $100,000 to study three experimental techniques for trapping small particles with lasers.

Spacecraft flying by comets and asteroids or rovers landing on Mars could use the methods to continuously sample their target.

While such technology has been used in biological and surgical applications for years, there has been little work on using it for remote sensing in space, said Paul Stysley, a NASA engineer at Goddard Space Flight Center in Greenbelt, Maryland, who leads the group studying the techniques.

The idea of using tractor beams on space missions caught the attention of members of NASA’s Mars rover project.

“At first they thought we were a little crazy, but luckily that group is supportive of crazy ideas,” said Stysley.

Current rover missions use drills, which can take a long time to get a sample. But a future probe could quickly zap rocks with a laser and then use a tractor beam to collect some of the resulting vapor. A beam pointed at the atmosphere could also monitor how gases change in response to day-night cycles on Mars.

Though the three technologies will require further investigation and may take up to a decade to develop for space-based missions, much of the work is already being done here on Earth.

The first technique, optical tweezers, is already common in biology laboratories. This method uses a pair of lasers with beams that travel in opposite directions. Changing the intensity of one beam heats air around trapped particles and can cause them to travel toward a probe, essentially creating an optical conveyor belt. But this technology can only be used when an atmosphere is present, so while it could work on some planets, it won’t work in the vacuum of space.

Alternatively, the team is investigating a Bessel beam, which creates a ring of light around small molecules to generate electric and magnetic fields to move samples. This method, which as yet only exists on paper, would work in space but would be more limited to close-in observations.

The final technique uses optical solenoid beams, where the laser’s intensity forms a corkscrew shape that can be used to nudge samples into a trap. Theoretically, this technology can be used in a vacuum and also has the advantage of being able to draw in material from far away, which would be useful for satellites orbiting high above a comet or asteroid.