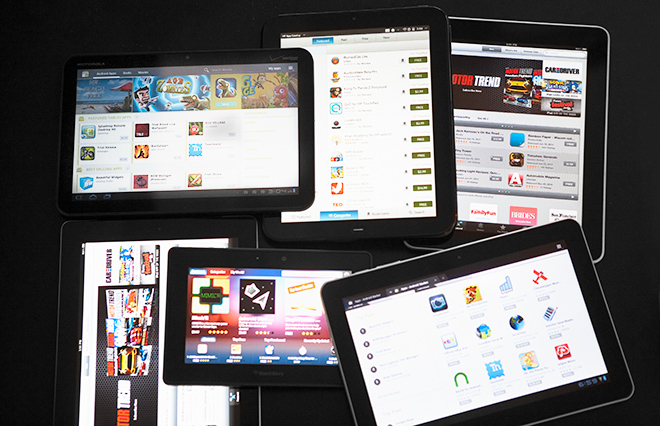 Attention prospective tablet buyers: Are you worried a new touchscreen device won’t sate your gaming lust with Angry Birds alone? Videogame retailer GameStop launched a customized tablet package on Wednesday, bundling an Android tablet (you can choose among three) with a physical gaming controller (well, sort of) and a selection of pre-installed games.

It’s not a terrible deal. The three available tablets — Acer’s 7-inch Iconia Tab, Asus’ 10-inch EeePad Transformer and Samsung’s Galaxy Tab 10.1 — all come with a host of games, yet don’t cost any more than their normal prices.

But here’s the lame part: The “bundled” controller, a wireless model resembling a Sony PlayStation Dualshock — isn’t free. You’ll have to shell out another $40 if you want to game the old-school way. However, if you’ve got a spare Xbox controller, the Android Open Accessory feature allows you to connect the controller to a tablet via USB.

As the tablet market has matured over the past 18 months, interest in touch-based casual gaming has skyrocketed. And, as a result, console gaming has taken a hit. A study by research firm GFK MRI claims “a majority” of gamers who own tablets are picking up their Xbox and PS3 controllers less often.

And that puts the hurt on retail outfits like GameStop, which make their money dishing out high-cost, high-production-value console games.

To be clear, it’s not exactly a bull market for most tablet manufacturers. Apple’s near-indomitable iPad has roundly trounced Android-based competitors — to the tune of 93 percent of the tablet market at the end of 2010, according to a report from ABI Research. While Android tablets have gained a significant amount of ground over the past year, Apple still retains the lion’s share of the market at 66.6 percent, according to research firm Strategy Analytics.

GameStop’s tablet bundle, then, benefits both struggling Android tablet makers and the retailer itself: GameStop moves into another gaming ecosystem by reaching the casual gamer, while also moving dust-covered Android tablets off the shelves.

If its tablet gaming package takes off, could GameStop push further into the app economy by opening up its own app store? Perhaps. Between OS makers, carriers and hardware manufacturers, everyone seems to be launching an apps marketplace of some sort or another. So it’s not a stretch to think a huge games retailer like GameStop would want to bolster its brick-and-mortar sales by entering the online app economy.

But first things first. GameStop has to prove that selling game-loaded tablets makes sense, rolling the approach out slowly in a 200-store soft launch this week.

Read 2795 times
Published in News Technologique-Tech News
More in this category: « Viking Sunstone Guided Ships in Cloudy Weather Does Music Change The Taste Of Wine? »
back to top