On our website I wrote the following in the spacecraft intro section:

“The spacecraft group is in charge of fulfilling the complex mission of keeping one person alive for the suborbital space ride, and to make the ride a great experience.

The spacecraft is the one system in use during the entire flight from ascent to descent. Therefore we need to develop solutions that ranges from the seating system (from high acceleration launch to zero gravity to ground impact), parachutes, life support systems, heat shield, aerodynamics, cabin pressure control and ground communication. The list is long and very exciting.”

The first spacecraft hand build by Copenhagen Suborbitals was the Tycho Brahe-1. It was a one man standing-up configuration spacecraft. I will let you know all about it later in dedicated blog posts and jump right to the new space capsule Tycho Deep Space so you will become up to speed with the contemporary development process.

Humans in space were the main driver for the development of rockets during the space race. There is a major political statement about bringing “one of us” into space instead of a satellite or gizmo (well, except being first like Sputnik). At my time at NASA it was still clear to me that humans where a secondary payload and the design process was orientated around machines and not humans.

If the human factors are indeed far from being incorporated into the development phases I believe there are several reasons why this is the case:

1) Tradition: With roots in the space race, space flight began as a demonstration of technological- and political power. The human presence in space was merely a better way to position a country in space. Humans were considered a secondary element to technology itself.

2) A grey area: The human nature, feeling and emotion can be difficult to identify and understand in graphs and charts.

3) Adaptation: Humans are exceptionally good at adapting to extreme environments. This skill has perhaps undermined the human role vs. the machines, as it has been widely accepted to view the human as a less important factor, serving and adapting to the machines.

I want to reverse the process. For me, the human being must be the baseline of the design and anything else must be add-ons. I want Peter to have a great first ride and all subsystems on the spacecraft must adapt and fulfill that purpose. This has been my design driver for both Tycho Brahe-1 and again for Tycho Deep Space.

Tycho Deep Space is an half sized Apollo-shaped space capsule with a diameter of 2 meters capable of serving one (or two) persons. The pressure cabin will contain 1 atm. of earth atmosphere. Eventually it will contain the required environmental and life support system (ECLSS) taking care of temperature, humidity, atmospheric pressure and more. There will be 3 main parachutes, 3 pilot chutes and 1 drogue all released in the top part of the capsule. The complete subsystems breakdown can be seen below and I promise you to go through all of them as they are being developed, so please have patience. 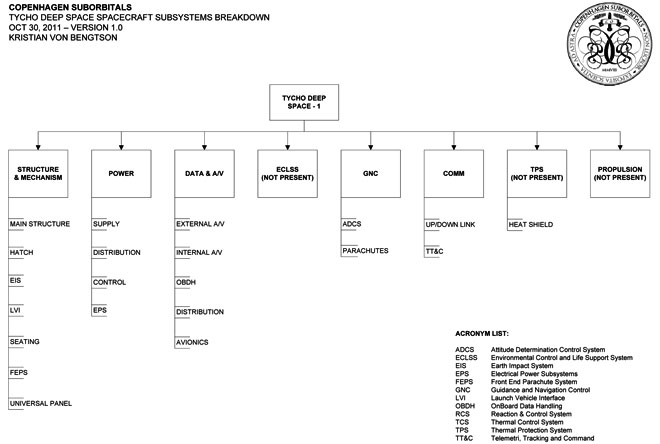 As always, most of the ideas come alive in my sketch books and very little are drawn in CAD-software; and for laser cutting purposes only. The diameter is always a major design driver and for this capsule the diameter is based on the idea of a 7 cluster HEAT engine configuration. As a thief in the night I have stolen angles and measurements from the NASA Apollo capsule, which pretty much gives the rest of the structure. Combined with the importance of seating and human requirements I am automatically given the rest of the volumes for parachutes, control panels, hatch etc. It’s a natural design process and it really doesn’t matter I you are designing a hair dryer or a space capsule. Know the process, be happy and feel good. 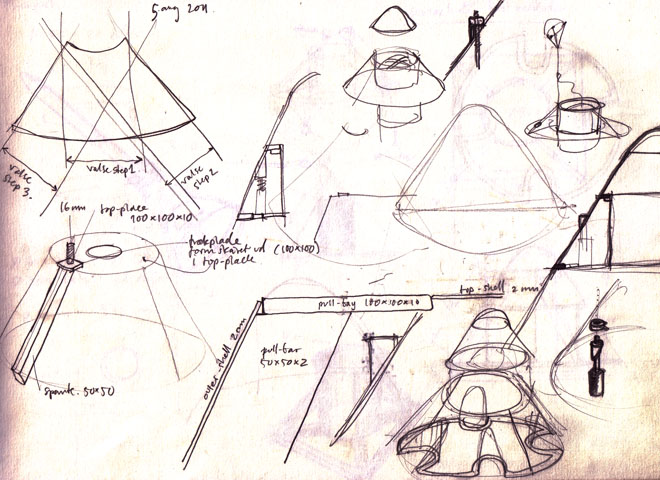 It is all about sketching... 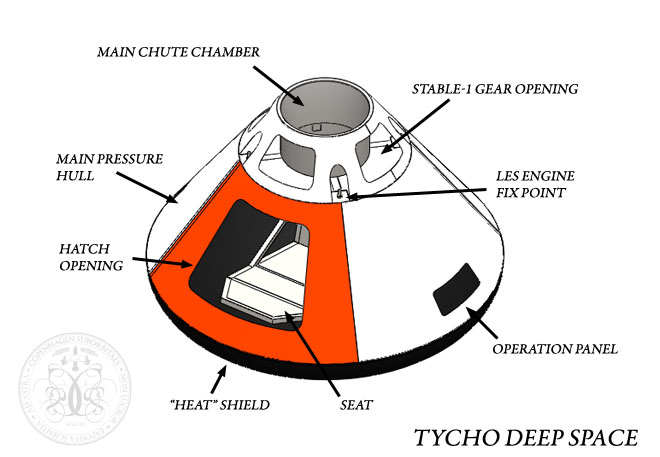 CAD drawing for laser cutting and you...

The overall hull design was done in primo July and soon after the “heat” shield was ordered by a company making dished ends for pressure tanks. A dished end called Klöpper apparently has the Apollo heat shield shape 99%. We are really not being hit hard by any energy on the way back to earth from a 150 km suborbital ride and certainly not during the 2 km LES test next summer. So we don’t actually work on heat shield issues but are more concentrated on the actual shape, because its look awfully cool. 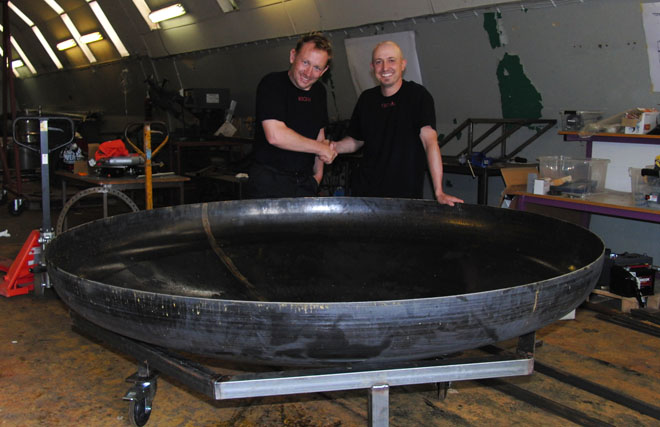 Soon after, the main hull was created using laser cutting and the capsule began to take shape. From experience we know it doesn’t make any sense to create detailed CAD drawings of every corner. In fact, there will only be made CAD drawings to make nice images later on. It is far easier in the development phase to design your space capsule as you go along in the workshop mostly because there are rarely any connection between what you draw and how you actually produce it. If you make a mistake you get hold of the angle grinder and start over again. 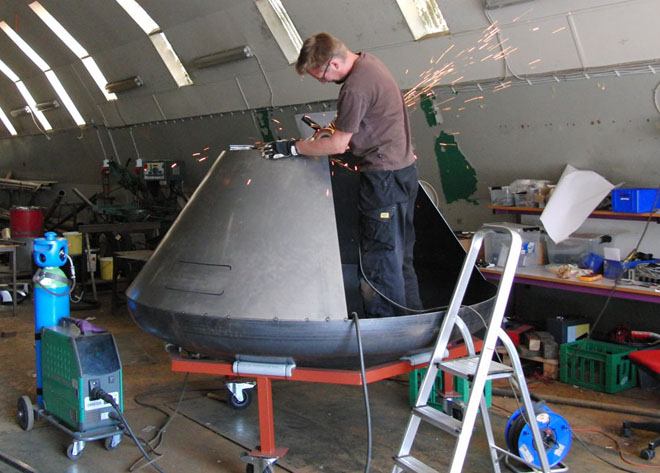 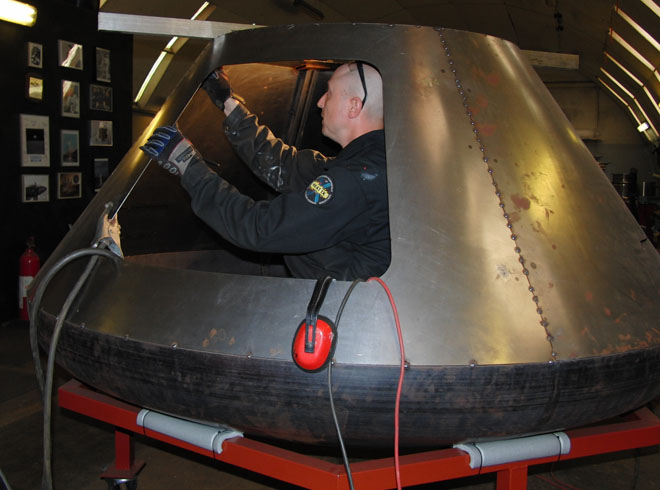 These days I am working with Claus Nørregaard sketching  the details related to the top part of the capsule which must hold all the different parachutes and the stable-1 gear, which are those delightful inflatable balls to keep the capsule in a correct orientation after splashdown.

The seating system and dampers are also in the process of being developed and produces as well as the parachutes. But I will leave that for future blog posts. 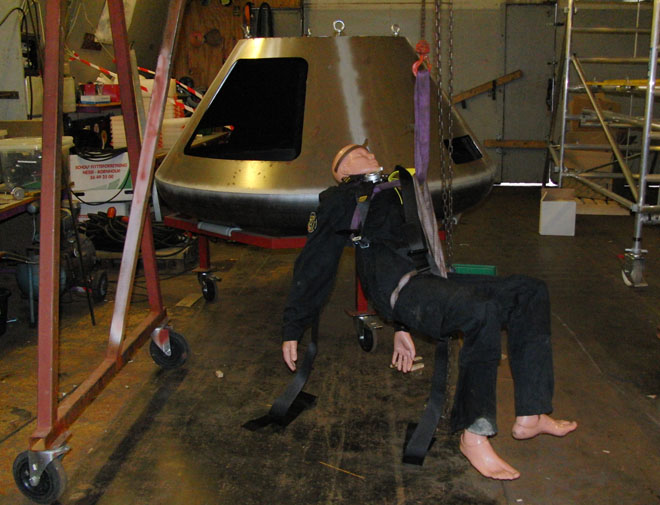 Test dummy Randy resting before the flight. He survived one flight already.

Right now I am at home writing this blog. In half an hour I will get to work and throw myself at the capsule. What a wonderful world. What a great job.