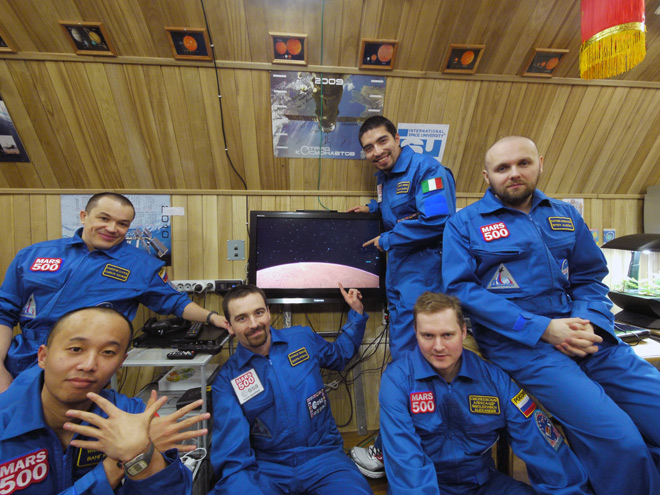 520 days after being locked inside a fake spaceship in a Moscow car park, a six-man team of volunteer astronauts is about to emerge back on planet Earth.

The year and a half of isolation, dubbed Mars500 and run by the European Space Agency (ESA), was designed to see how real space crews would cope with confinement, daily activities and psychological stress on a lengthy trip to the red planet and back.

The all-male crew could only shower once a week, ate canned food and received emails on a delay, depending on how “far away” they are from Earth. Their living quarters are the size of a bus and, outside of a quick stint on mock Mars, they’ve spent two eight-month periods in total confinement.

But Patrik Sundblad, the human life sciences specialist at the ESA, says the simulation has proved a complete success. “Yes, the crew can survive the inevitable isolation that is for a mission to Mars and back,” Sundblad stated. “Psychologically, we can do it.”

“They have had their ups and downs, but these were to be expected. In fact, we anticipated many more problems, but the crew has been doing surprisingly well,” Sundblad said. “August was the mental low point: it was the most monotonous phase of the mission, and their friends and families were on vacation and didn’t send so many messages.”

But as the spaceship started its virtual return to Earth and the artificial delay was reduced so that message flow slowly returned to real-time, the crew’s spirits rose.

Cooperation between the crew (which represented four different nationalities) and teams back on Earth was essential, says Sundblad. “It is not only about the spacecraft and its crew, but also about close cooperation on Earth between all the teams and the international space agencies.”

A real mission would have several more dangers. The Mars500 crew could leave at any time (though, to their enormous credit, they never did), while real astronauts would be completely trapped. Space debris, weightless and radiation add to the challenges, and being far from Earth can create a sense of uneasy detachment.

The capsule door will finally open on 4 November at 10am UTC, and you can watch a live video of the event at the ESA website. The fake Martian heroes will stay in isolation for another four days to ensure they’re not vulnerable to winter bugs.

Read 3626 times
Published in News Technologique-Tech News
More in this category: « Breakthrough Medical Gadgets: The Future of Healthcare Hardware 5 Wishes for The Next Generation of Consoles »
back to top