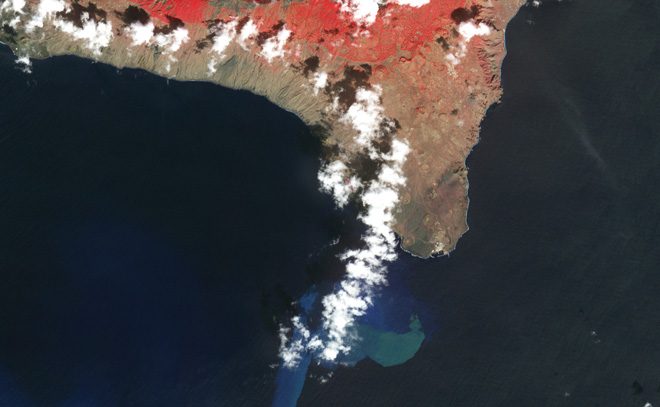 False color ASTER image of the southern tip of El Hierro, taken on November 1, 2011. You can clearly see the small scoria cones on the island itself and the submarine vent is likely very similar to these cones. Image courtesy of the NASA Earth Observatory.

It has now been a little over a week since the submarine eruption to the south of El Hierro in the Canary Islands peaked. Since then, the activity on the southside has waned significantly, no longer the bubbling cauldron we observed last week UPDATE: Nix that – bubbling has returned to the sea off of La Restriga. However, as many images can attest, the stains in the Atlantic Ocean persist (see above), with a strong indication that at least limited degassing is occurring at the original vent sight. This new vent was imaged with sonar to show a new cone with an associated lava flow – almost the same morphology of the terrestrial scoria cones that are scattered on the island itself. A small ROV also visited the area (video) to look at the evidence of the eruption and it looks much like what you might expect for a submarine eruption like this – rubbly and dark. The first estimates of the volume of material erupted from the southern activity is fairly small – ~0.012 km3 – however, the press release with this information is a little confusing as they go on to say that the volume of the lava flow alone is 0.7 km3, so the true volume of the eruption is still up in the air.

Increasing tremor recorded on El Hierro in the Canary Islands on November 3, 2011. Data courtesy of IGN.es

This activity south of the island seems to be, by no means, the end of the activity at El Hierro. Earthquakes are continuing under the island, but this time they are focused to the north of the island near El Golfo along a line across the island from the southern activity that follows the pre-existing rift lineation. The earthquakes have been, much like before, apparently very deep (>16 km) but the tremor at the island is increasing significantly as well, which suggests magma on the move towards the surface. This is supported by the news that carbon dioxide emissions across the island have increased over the past few days to over 1000 T/day, up from 300 T/day in July. All of these pieces of evidence would suggest that another eruption to the north of the island would not be surprising. The real question is to when that eruption might start and by the looks at some of the tremor on El Hierro, the answer to that question is likely soon (days?)

We also have some new compositional analyses of the material retrieved from the eruption on the southside of the island. It looks to be a bimodal mix of a low silica magma (either a basalt or basanite) and a high silica magma (either a trachyte or rhyolite). Now, the difference between those magmas is somewhat subtle, where it really comes down to the proportions of sodium and potassium (Na2O + K2O a.k.a., alkalis) in the magma relative to silica (SiO2). This difference is likely due to the extent of melting of the mantle beneath El Hierro, so determining exactly where these magmas fall is important for understand the mechanisms at work under El Hierro as the mantle plume that drives volcanism in the Canary Islands continues to produce melting and magma. It also might help predict the style of volcanism we might expect if the eruption continues. The most interesting observation here is that there are apparently two kinds of magma underneath El Hierro – the basanite/basalt and trachyte/rhyolite (see below). Based on what has observed at other volcanic systems similar to El Hierro (like Hawai`i or Iceland), the likely scenario is the rhyolite/trachyte is a highly fractionated magma formed as previous intrusions of basanite/basalt have crystallized. Most likely, there isn’t a large volume of these higher silica rhyolite/trachyte under El Hierro and likely it is a mush rather than molten magma, but it would seem that the new intrusions of magma are mixing/mingling with the remains of the previous intrusions. 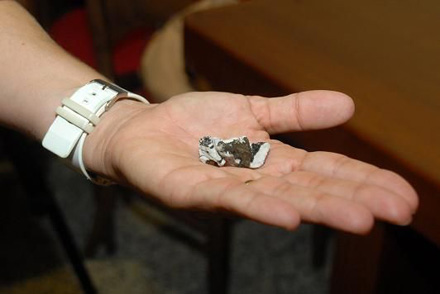 A small piece of the erupted material recovered from the new El Hierro vent - likely a mixed magma. Image from Diario El Hierro

Now, after the initial analyses of these floating blobs suggesting something like 75% aluminum, which is an entirely unrealistic composition for any magma, and now suddenly new analyses say they are pretty standard magmas, you might be wondering what happened. Well, it is likely something like the joke from The Simpsons after Mr. Burns gets shot: “Mr. Burns was taken to Springfield General where he was pronounced dead. He was moved to a better hospital where his condition was upgraded to ‘alive’”. Very quick, early analyses are usually not too reliable because they are hastily done on the equipment on hand, which might not be the best for the task. Given some time, proper analyses of the material can be done on better instrumentation that gives a more reliable composition for the rocks.

So, it seems that the wait will continue for the people of El Hierro – what will happen next as this volcano revives itself after hundreds of years (at least) of quiet. So far, the eruptions have been mostly harmless to the general population, and hopefully it will remain this way. However, the waiting may be the hardest part in this situation.