Does Inequality Make Us Unhappy? 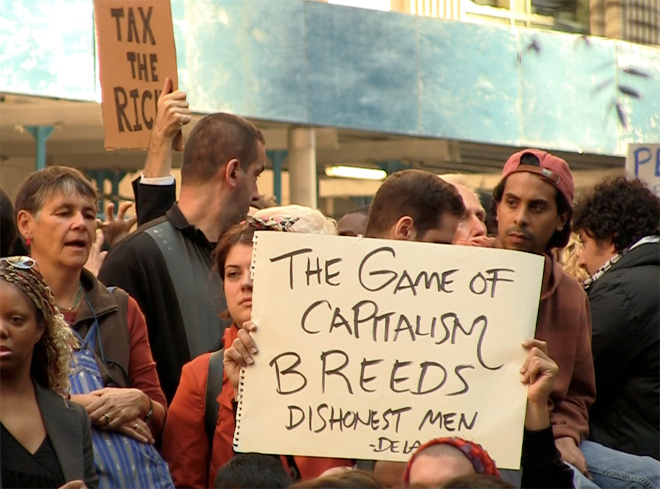 Inequality is inevitable; life is a bell curve. Such are the brute facts of biology, which can only evolve because some living things are better at reproducing than others. But not all inequality is created equal. In recent years, it’s become clear that many kinds of wealth disparity are perfectly acceptable — capitalism could not exist otherwise — while alternate forms make us unhappy and angry.

The bad news is that American society seems to be developing the wrong kind of inequality. There is, for instance, this recent study published in Psychological Science, which found that, since the 1970s, the kind of inequality experienced by most Americans has undermined perceptions of fairness and trust, which in turn reduced self-reports of life satisfaction:

It’s now possible to glimpse the neural mechanisms underlying this inequality aversion, which appears to be a deeply rooted social instinct. Last year a team of scientists at Caltech published a fascinating paper in Nature. The study began with 40 subjects blindly picking ping-pong balls from a hat. Half of the balls were labeled “rich,” while the other half were labeled “poor.” The rich subjects were immediately given $50, while the poor got nothing. Life isn’t fair.

The subjects were then put in a brain scanner and given various monetary rewards, from $5 to $20. They were also told about a series of rewards given to a stranger. The first thing the scientists discovered is that the response of the subjects depended entirely on their starting financial position. For instance, people in the “poor” group showed much more activity in the reward areas of the brain (such as the ventral striatum) when given $20 in cash than people who started out with $50. This makes sense: If we have nothing, then every little something becomes valuable.

But then the scientists found something strange. When people in the “rich” group were told that a poor stranger was given $20, their brains showed more reward activity than when they themselves were given an equivalent amount. In other words, they got extra pleasure from the gains of someone with less. “We economists have a widespread view that most people are basically self-interested and won’t try to help other people,” Colin Camerer, a neuroeconomist at Caltech and co-author of the study, told me. “But if that were true, you wouldn’t see these sorts of reactions to other people getting money.”

What’s driving this charitable brain response? The scientists speculate that people have a natural dislike of inequality. In fact, our desire for equal outcomes is often more powerful (at least in the brain) than our desire for a little extra cash. It’s not that money doesn’t make us feel good — it’s that sharing the wealth can make us feel even better.

In reality, of course, we’re not nearly as egalitarian as this experiment suggests. After all, the top 1 percent of earners aren’t exactly lobbying for higher taxes or for large lump-sum payments to those on welfare. (The exceptions, like Warren Buffett, prove the rule.)

What explains this discrepancy? It’s probably because the rich believe they deserve their riches. Unlike the subjects in the Caltech study, whose wealth was randomly determined, the top earners in America tend to feel that their salaries are just compensation for talent and hard work. (Previous research has demonstrated that making people compete for the initial payout can dramatically diminish their desire for equal outcomes.) The end result is that our basic aversion to inequality — the guilt we might feel over having more — is explained away, at least when we’re at the top.

A similar lesson emerges from a classic experiment conducted by Franz de Waals and Sarah Brosnan. The primatologists trained brown capuchin monkeys to give them pebbles in exchange for cucumbers. Almost overnight, a capuchin economy developed, with hungry monkeys harvesting small stones. But the marketplace was disrupted when the scientists got mischievous: instead of giving every monkey a cucumber in exchange for pebbles, they started giving some monkeys a tasty grape instead. (Monkeys prefer grapes to cucumbers.) After witnessing this injustice, the monkeys earning cucumbers went on strike. Some started throwing their cucumbers at the scientists; the vast majority just stopped collecting pebbles. The capuchin economy ground to a halt. The monkeys were willing to forfeit cheap food simply to register their anger at the arbitrary pay scale.

This labor unrest among monkeys illuminates our innate sense of fairness. It’s not that the primates demanded equality — some capuchins collected many more pebbles than others, and that never created a problem — it’s that they couldn’t stand when the inequality was a result of injustice. Humans act the same way. When the rich do something to deserve their riches, nobody complains; that’s just the meritocracy at work. But when those at the bottom don’t understand the unequal distribution of wealth — when it seems as if the winners are getting rewarded for no reason — they get furious. They doubt the integrity of the system and become more sensitive to perceived inequities. They start camping out in parks. They reject the very premise of the game.