1879: James Jacob Ritty patents the first cash register. It’s supposed to be a way to keep his bartenders honest. The invention does little to curtail employee pilferage — but it does create a massive industry and enables hipsters several generations later to coin the phrase ka-ching!

Ritty opened his first bar in Dayton, Ohio, styling himself a “Dealer in Pure Whiskies, Fine Wines, and Cigars.” It was a popular spot but, trouble was, some of money that was supposed to go into the till never quite made it there.

Without any sort of audit trail, bartenders could literally make out like bandits — and, even in a world now replete with cash registers, they still can. In my own limited (ahem) experience I have found that a quality relationship with a New York City bartender can easily blossom from the occasional buyback to a night of drinking abandon for the price of a generous tip.

While on a sea trip Ritty admired a contraption that kept count of how many times the ship’s propeller had turned, and it gave him a sobering idea: What if he could build a device that tallied, in real time, the money his bar took in?

Working out the kinks with his brother John, Ritty’s first two attempts at making a mechanical tabulation device were less than successful. But the third one was the charm, and “Ritty’s Incorruptible Cashier” forever changed the way we were parted from our money.

But not right away. Unlike the inspirational ship’s device, which automatically counted propeller rotations, Ritty’s machine still depended on the kindness of strangers: The clocklike face did display for all to see the cash tally of the moment — but only if the person taking the money, er, “remembered” to enter the transaction.

And there was no cash drawer. Money still went into the box (or pocket) where it had previously gone. Also, employees didn’t think much of the device because it complicated stealing for the dishonest ones, while branding the honest ones as prospective thieves.

Nevertheless, the business of making these mechanical devices seemed promising, so Ritty formed a company to build and sell them to other mistrustful captains of industry. After a few years Ritty found that running two thriving concerns became too much for him, so he sold his interest in the cash register firm and stayed in the bar business — perhaps not the best decision he ever made.

Ritty’s cash register company was sold again in 1884 to John H. Patterson, who renamed it the National Cash Register Co. The company survives to this day as NCR — a diversified public corporation which still makes cash registers and has a market cap of $2.86 billion in October 2011.

It is another one of history’s little ironies that the problem Ritty hoped to solve with his “Incorruptible Cashier” still looms large, and is attacked now in an entirely different way — with concealed product inserts that set off alarms, out-sized packaging that is difficult to conceal and exploding security tags that cover an offender with indelible ink. 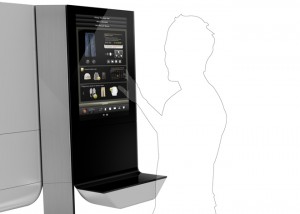 Cash registers — still so called even though at least as many transactions are now completed with credit cards and checks — no longer bear any resemblance to Ritty’s first effort. Yet they continue to evolve as thoroughly high-tech devices whose main selling point to retailers is efficient inventory control and accounting, and to consumers, speedy and frictionless checkouts.

Before UPC barcodes arrived in 1974, cashiers had to enter a price manually on a set of numbered keys grandly arched on ornate devices that resounded at each transaction with a reassuring sound of the bell — the “ka-ching” which has come to metaphorically mean “cashing in.”

Transactions are recorded and payment is accepted in wireless devices that look like Star Trek tricorders and, yes, there is even an app for that. Wired.com wrote in 2008 about a prototype Intel cash register that looks like a pinball machine and would, Amazon-style, suggest items you might also be interested in as part of a checkout process.

So reliable is the checkout-security aspect at the point of sale that we are now allowed to conduct the transaction by ourselves with minimal supervision at supermarkets, price-club warehouses and ginormous home-improvement stores — a turn of events that would surely make Ritty’s head spin.

Top photo: The National Museum of American History houses a replica of the Ritty Incorruptible Cashier. The clocklike dial registered the dollars and cents. (Courtesy NMAH)