CIA Drones Can Kill You Without Knowing Who You Are 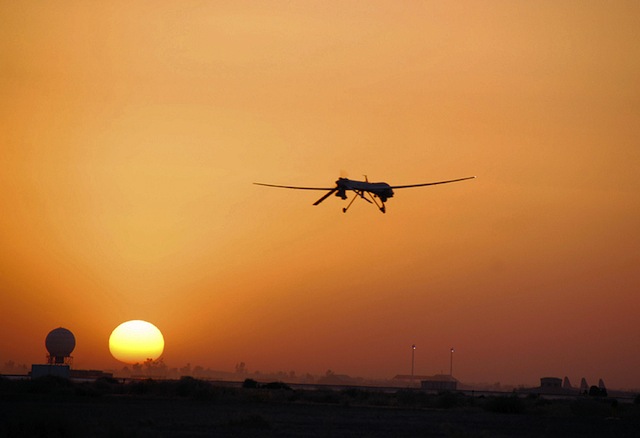 The expansion of the CIA’s undeclared drone war in the tribal areas of Pakistan required a big expansion of who can be marked for death. Once the standard for targeted killing was top-level leadership in al-Qaeda or one of its allies. That’s long gone.

This is the new standard, according to a blockbuster piece in the Wall Street Journal: “men believed to be militants associated with terrorist groups, but whose identities aren’t always known.” The CIA is now killing people without knowing who they are, on suspicion of association with terrorist groups. The article does not define the standards are for “suspicion” and “association.”

It’s not a question of intelligence collection. The cameras on the CIA fleet of Predators and Reapers work just fine. It’s a question of intelligence analysis — interpreting the imagery collected from the drones, and from the spies and spotters below, to understand who’s a terrorist and who, say, drops off the terrorists’ laundry. Admittedly, in a war with a shadowy enemy, it can be difficult to distinguish between the two.

Fundamentally, though, it’s a question of policy: whether it’s acceptable for the CIA to kill someone without truly knowing if he’s the bombsmith or the laundry guy.

The Journal reports that the CIA’s willingness to strike without such knowledge — sanctioned, in full, by President Barack Obama — is causing problems for the State Department and the military.

As we’ve written this week, the high volume of drone strikes in the Pakistani tribal areas contributes to Pakistani intransigence on another issue of huge importance to the U.S.: convincing Pakistan to deliver the insurgent groups it sponsors to peace talks aimed at ending the Afghanistan war. The drones don’t cause that intransigence. Pakistan’s leaders, after all, cooperate with the drones and exploit popular anti-American sentiment to shake down Washington. The strikes become cards for Pakistan to play, however cynically.

The State Department is sick of it. It fears the rise of really anti-American leadership in Pakistan, riding into power on a wave of outrage over the drones. The Journal reports that earlier this year, the State Department gained greater say over targeting. So did the military, which fears Pakistan cutting off the supply routes to Afghanistan that run through its territory.

The CIA is still in control. “It’s not like they took the car keys away from the CIA,” an anonymous senior official tells the Journal. “There are just more people in the car.”

And the basic question — Who should be targeted? — hasn’t changed. The default answer, to put it bluntly, is: Whomever the CIA can. Clive Stafford Smith, a human rights lawyer, points to a consequence: a young man named Tariq was killed in a drone strike with his 12-year old cousin, Waheed Khan, while driving their aunt home.

“Tariq was a good kid, and courageous,” Stafford Smith writes. “My warm hand recently touched his in friendship; yet, within three days, his would be cold in death, the rigor mortis inflicted by my government.”

As long as the CIA — now backed by the military and the State Department — has a free hand to wage the secret drone war in tribal Pakistan, it will continue to bottle up al-Qaida and its allies, degrading the threat they pose. They will also kill more Tariqs and Waheeds. And because the drone war remains a classified, CIA program, the CIA will not have to account for its actions to anybody, least of all the U.S. or Pakistani publics.