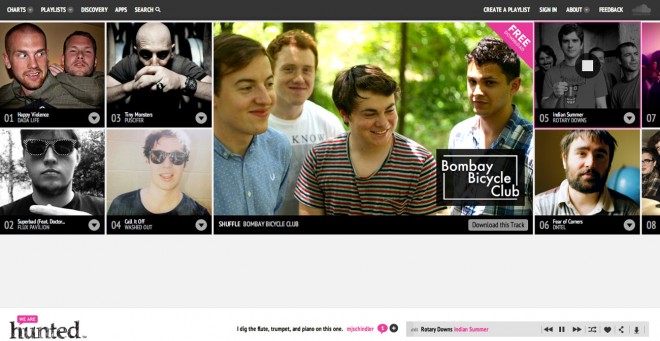 The cleverly revamped We Are Hunted makes it easier than ever to discover new music.
Screengrabs: Evolver.fm (Click to enlarge)

We Are Hunted, a web app that reinvents the music chart as a dynamic tool for finding new tunes, has added impressive new features without sacrificing the appealing, image-oriented layout of the original.

The Australian-designed music service serves up a socially powered reflection of what music fans are into — arguably a far more important metric these days than sales charts.

We Are Hunted first impressed me back in the spring of ‘09 with its simple, image-centric approach. The title is apt: Many of these songs should be hunted, and in fact already have been, by someone, which is how they end up on the chart.

It didn’t hurt that the music We Are Hunted finds tends to be of the interesting sort, if you’re the type who prowls for new music rather than revisiting your private stores of the stuff.

The new We Are Hunted — now a fluid, side-scrolling web app — is also social network. You can set up a profile; and when you click an image to listen, you see a comment left by other listeners in the persistent music player at the bottom of the screen. It can also make you a playlist out of its chart based on your Twitter tweets and your Facebook Likes, personalizing the chart in a whole new way. 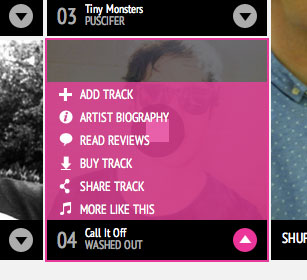 With We Are Hunted, you can learn about each band by clicking the arrow, or go to the artist page to see what blogs and other sources are saying.

Options for sharing songs with friends, buying music, creating playlists, commenting on tracks and so on are everywhere — but they don’t get in the way. We Are Hunted is as simple as it ever was, just better.

Equally important, the music it presents is timely, having been selected with the help of music blogs, social networks, message boards and P2P networks.

It’s the musical zeitgeist, wrapped up neatly with a bow on top — and you can listen to all of it, with much of the music coming from SoundCloud.

If you’re a music fan, our work here is done: Check it out for yourself. If you’re interested in the new, impressive design, here’s what We Are Hunted’s Stephen Phillips told Evolver.fm about the guiding principles for this redesign:

“1. Getting people to scroll past the first nine tracks. A lot of people came to the site for the first time and did not notice that they could click ‘next page’ and get more tunes.

3. Better promote the great playlists created by members. We have thousands of active users who curate really cool playlists but no one could find them on the site.

4. Getting people to explore the site more deeply. We have a lot of very cool content on the site like rich artist pages that were not getting visited.”

About that side-scrolling design, which seems inspired by smartphone and especially tablet apps: Would it work on other sites too?

“Horizontal scrolling will probably not become common, because for most designs, it just feels weird. But maybe as tablets and swipeable interfaces proliferate, we will start seeing it more.

It’s fun to imagine something so ingrained and fundamental to the web as vertical scrolling might be challenged. As designers we live in a world governed by best practice and usability guidelines. Like somehow there is one right way to design things. We do not believe in that. Maybe because we are in the music space or whatever, we feel we are not bound by those rules. If it feels right to us, if it is fun to use, then we do it.”