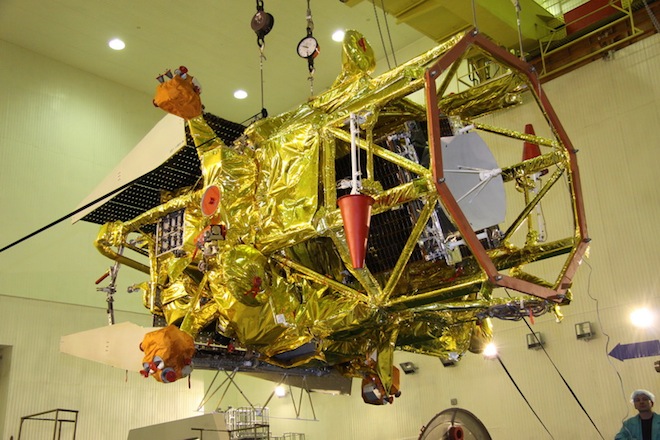 If you don’t succeed the first 18 times, try, try again. That might be the motto of the Russian space agency Roscosmos, which is preparing to launch its first new probe to Mars after a long string of failures and a 15-year hiatus on planetary science exploration.

The Phobos-Grunt probe, expected to launch at 1:26 pm Pacific on Nov. 8, is a mission designed to orbit Mars, land on one of its moons, Phobos, and return a small sample of surface material from the moon (grunt is Russian for soil). The probe will gather data to hopefully help explain the mystery of how Phobos and its twin satellite, Deimos, were created.

The spacecraft is extremely ambitious, tipping the scales at nearly 15 tons and carrying Yinghuo-1, the first Chinese satellite to head to Mars, which will study the planet’s surface, atmosphere, and magnetic field. Phobos-Grunt is also carrying instruments from France, Finland, Bulgaria, and the non-profit space research group The Planetary Society.

Despite its status as a great space faring nation, Russia has never done well regarding Mars missions. From the 1960s onward, the USSR made 17 attempts to send spacecraft to Mars, with not a single one fully succeeding. The probes all either failed at the launch pad, exploded in Earth orbit, or mysteriously stopped communicating.

The sole mission to come from post-Soviet Russia, Mars 96, never even left Earth orbit after launching on Nov. 16, 1996, instead accidentally re-entering the atmosphere and burning up.

Now Russia is hoping to put the past behind it and restart its interplanetary exploration. Roscosmos currently expects to launch a lunar orbiter in 2014 and, should Phobos-Grunt be successful, has plans for missions to asteroids, comets, and the moons of the gas giants.

When Phobos-Grunt lands on Phobos in February of 2013, it will gather seven ounces of surface material in a canister and launch the sample back to Earth for study, expected to arrive in August 2014. Researchers prize samples from other bodies in the solar system since their composition can help unravel the creation and history of other planets. As yet, scientists have only obtained material from the moon, asteroid 25143 Itokawa, and comet Wild 2.

Because Phobos is so close to Mars, it may be coated in a small layer of Martian soil deposited there from asteroid impacts that kicked up planetary dust. Phobos-Grunt may gather a small amount of this valuable material, making it the first mission to bring a tiny piece of Mars back to Earth.

Phobos-Grunt could also help pave the way for future manned missions to the Red Planet. NASA has suggested that astronauts headed to Mars could make a stopover on one of the Martian moons to potentially obtain useful elements. The Russian probe should map out possibly useful resources during its mission.

On its journey to Mars and back, the spacecraft will be carrying some very tiny explorers. The Planetary Society’s LIFE experiment has placed bacteria, plant seeds, and small invertebrates called tardigrades inside a hockey puck-sized canister to see if life can survive the trip between Earth and Mars. Should they endure the rigors of interplanetary travel, these microorganisms could give credence to the theory that life migrated from planet to planet on meteoroids.