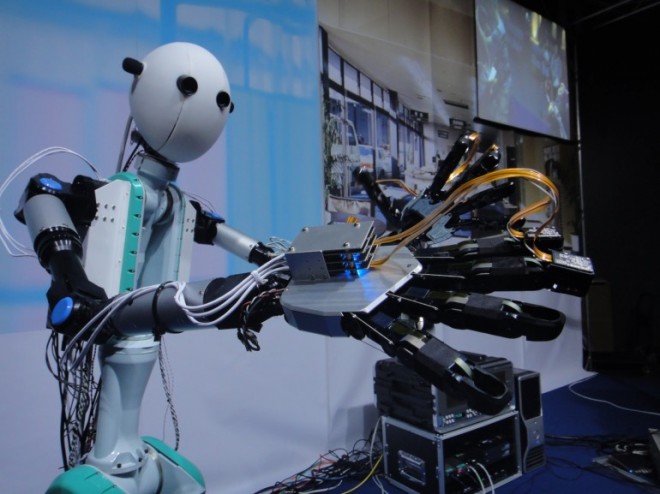 We’ve seen robotic stand-ins portrayed in movies like Avatar and Surrogates. Now, researchers are developing them in earnest. The Telesar V Robot Avatar is one such robot, potentially allowing you to experience a foreign or distant world without actually being there.

The Telesar V can deliver a remote experience straight to its operator, transmitting sight, sound and touch data using a series of sensors and a 3D head mounted display. The robot’s operator wears a 3D display helmet, which relays the robot’s entire field of view. A set of headphones transmit what the robot can hear.

“With this system, you have hands that you can move just like your own,” says Susumu Tachi, leader of the research team that developed the Telesar V at Keio University in Tokyo. More than just an extra pair of hands, sensors on Telesar’s fingers measure and deliver touch sensations to the operator, making it possible to use the robot as a touchy feely surrogate.

With the TELESAR V robot, for instance, you can actually feel the shape and temperature of objects, as well as surface unevenness like that of the bumps on the tops of LEGO blocks.

Think of the implications for the medical field: A doctor or surgeon could remotely interact with a patient at a distant office, or perhaps an even more distant patient in an undeveloped country. Or perhaps the technology could be used in space exploration, to forage the surface of distant planets without actually requiring a human on the ground. Other dangerous situations like bomb discovery or disarming could be made much safer if bomb squads were equipped with their own Telesar V stand-ins.

Some nifty telepresence robots — similar to telexistence, but less immersive — are already available in the U.S. The Anybots’ QB Robot has a webcam in its “head,” relaying visual information to its operator while displaying an image of the person at the helm on a small display underneath the camera. Almost Segway-esque in appearance, the QB is a two-wheeled apparatus controlled remotely via desktop. Though at $15,000 a pop, it’s designed more for corporations who need to check in on remote offices than the average consumer.

As far as movement goes, the Telesar V has 17 degrees of freedom in the body, 8 in the head and 7 in the arm joints (which is the same as a human). The hands have 15 degrees of freedom, which is a good amount less than the roughly 30 degrees of freedom a normal human hand has (and some other robotic hands emulate), but enough to allow the robot to easily manipulate objects.

Check out the video below to see the Telesar V Robot in action.