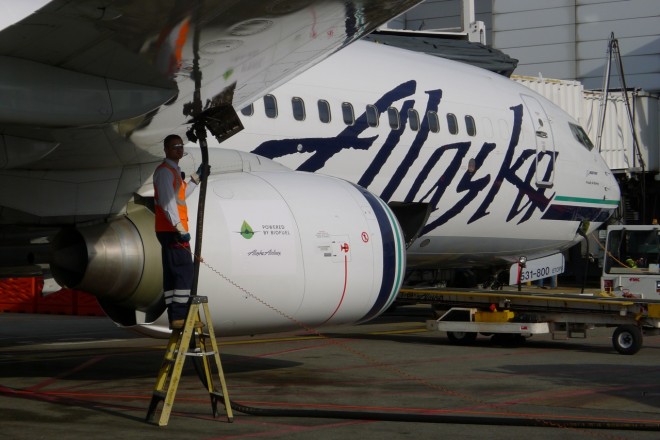 SOMEWHERE OVER MONTANA — I’m sitting aboard a Boeing 737-800 burning a biofuel blend, en route to Washington, D.C. It’s the first of what Alaska Airlines says will be 75 flights made with biofuel during the next month.

Perhaps the most exciting part of the flight is that it isn’t that exciting. The 20 percent biofuel blend fueling the turbofan engines burns just like conventional jet fuel. It’s no different for the pilots or the passengers, for whom it’s just another flight to D.C. And for Alaska Airlines, the ho-hum nature of the flight is one of the big points the company is trying to make.

There have been many biofuel demonstration flights during the past few years, with everything from fighter jets to 747s burning the stuff. But they’ve typically been demonstration flights without passengers. That’s changing as airlines begin regularly scheduled flights. Lufthansa has flown several flights in Europe using a biofuel blend, and United Airlines made a biofuel passenger flight Monday, a first for a domestic carrier.

But Alaska is taking a bigger step into alt-fuels with a plan to make 75 biofuel-powered flights this month. The company wanted to go beyond demonstration flights to show the fuel can be used right now, without any issues or challenges. The biofuel is produced by Dynamic Fuels in Louisiana using feedstock derived from used cooking oil and the byproducts from meat production. The biofuel meets the exact same standards as normal jet fuel. 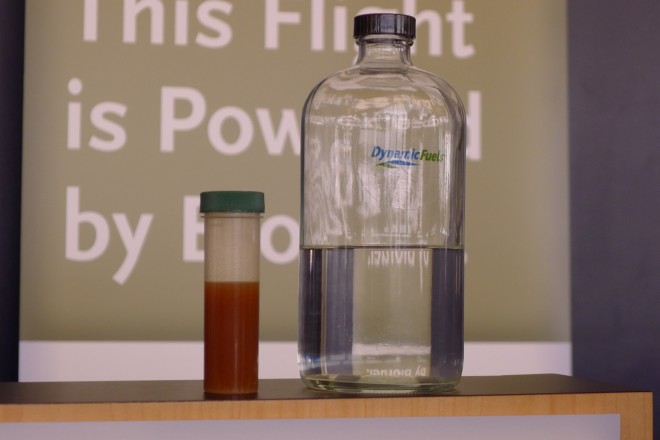 The clear stuff on the right is the aviation-grade jet fuel produced by Dynamic Fuels. The brown stuff is the recycled cooking oil the jet fuel is produced from.

The biofuel may be chemically identical to the Jet A fuel usually burned in the 737, but it isn’t priced identically. Alaska Airlines paid $16 a gallon for the stuff, compared to about $3.15 a gallon for Jet A. The airline readily admits the high price means biofuels won’t replace jet fuel anytime soon.

Of course, the hope is costs will come down as production goes up and refining technology improves. Billy Glover, managing director of environmental strategy at Boeing, says the industry is working to bring down costs. He noted that new technology is always expensive for the early adopters.

“What did you pay for your first calculator?” Glover rhetorically asked those gathered for the flight, making a reference that might be lost on anyone younger than 50.

The flight to D.C. carried 3,269 gallons of the 20 percent blended fuel. It joins another Alaska Airlines biofuel flight, a Bombardier Q400 bound for Portland, Oregon. The airline plans to make three daily roundtrip biofuel flights to Portland and a daily flight to Washington, D.C. each day this month.

The industry is being realistic in its plan to implement biofuel, with several major airlines and manufacturers saying they’d like to begin using a blend containing 1 percent biofuel by 2015.