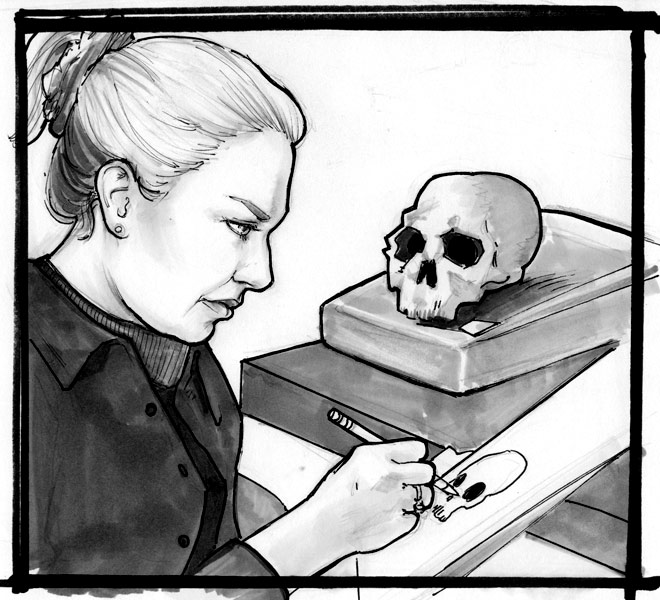 By her own admission, Donna Cline, the forensic technical adviser for crime procedural series Bones, can be something of a nightmare. Not because she’s a jerk or because she spends most of her day focused on dead things, but because she’s so meticulous that she doesn’t let much slide.

Cline is constantly making sure the cases analyzed by Dr. Temperance Brennan (aka “Bones,” played by Emily Deschanel) are as scientifically accurate as possible. But Cline, who is also a storyboard artist with a master’s degree in biomedical illustration, knows there’s only so much she can do.

“I’m like the worst nightmare because I really want to start with reality,” Cline told Wired.com. “On the other hand, I’m a storyboard artist and I’m a film person, so I understand the need for the dramatic part. It’s always a fine dance.”

Cline focuses on the cast, arriving on the set to make sure actors like Deschanel and David Boreanaz (FBI agent Seeley Booth) act the way they should around the corpses that pop up on the show. So, does she have any bones to pick with the thespians she advises? Absolutely not.

“The actors are amazing,” Cline said. “Emily is asked to do just all kinds of things that are very technical with the bodies, and understanding how to make her body language and her dialog match the drama. The way she paces it, it’s amazing.”

Check out Cline’s TV Fact-Checker bio below and find out about her work on The X-Files, the gross anatomy of working on a Fox show, and what’s up with the “hot dog” in Thursday’s episode.

Bona fides: Did storyboards for The X-Files. Master’s degree in biomedical illustration. Does composite illustrations of suspects for Los Angeles Police Department. Has worked in TV and feature films for more than two decades.

Wired.com: How did you wind up on Bones?

Donna Cline: I did the last three seasons of The X-Files and at that point I think [the producers of] Judging Amy asked them who was doing their storyboards…. I met our unit production manager Jan DeWitt and a prop master, and they ended up going over to start Bones after the pilot. They called me up and said, “This is your stuff, you’d better get over here.”

Wired.com: What kind of things are you asked to fact-check on the show?

Cline: While I’m working on one episode that’s shooting, I’m also prepping the next one. Basically, I might start with getting the early scripts from the writers and begin doing whatever points of research they may need, or whatever they are stuck on. Or if they need something innovative about how to take us from one place to another dramatically, I can provide rationales for that.

Wired.com: How much do you work with the actors on their dialog and behavior?

Cline: I work with the cast to make sure they’re comfortable with the myriad technical details that we have on Bones. Whether it has to do with the dialog and pronunciation, which I do for them, or visual references in the body — they get a packet of all of that material for every episode. 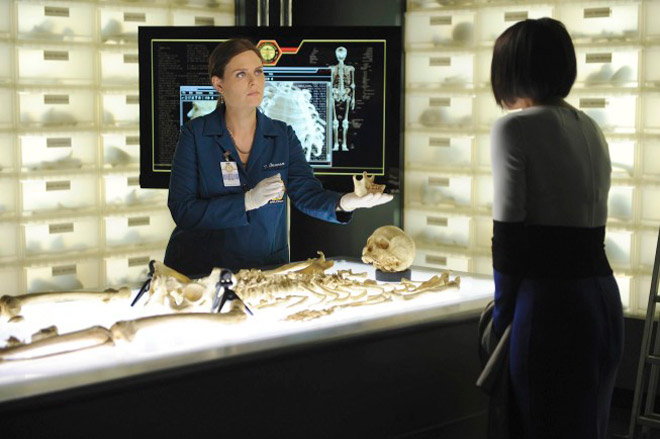 Wired.com: Do you spend time with them on-set?

Cline: The day of shooting, when we’re on the set, I’ll work with them, not only with the subtleties and the nuance of what they’re doing technically, but also their nonverbal behaviors — how they are around a body and whether that looks authentic. I’m on-set when Emily and the other cast members are doing anything technical, like when they’re in the bone room, the autopsy room, the forensic platform and the crime scenes.

Wired.com: How do you research those things?

Cline: It ranges from print — I have a huge library of forensic pathology books — to a massive network of specialists. If I have to, I will call them. I have a huge range of people, from bear-mauling experts to heart surgeons. The other thing I use is my own experience. Just instincts that have developed.

Wired.com: Is there any particularly interesting tidbit you can share about upcoming episode “The Hot Dog in the Competition”?

Cline: There is an interesting dental condition in this one, and an interesting small-intestine condition. Basically, with the small intestine, there’s something very, very different about it. So we had to work that out in terms of feasibility, even in terms of what was in our meeting room. I don’t know if I should say that. What was in our meeting room when we were having our prepping meeting that ended up on-set, you won’t believe it.

Wired.com: Please tell me what the “hot dog” is.

Wired.com: So was that something you had to consult medical journals to figure out?

‘That’s the beauty of Bones. We start with reality and we deviate from there.’

Cline: That’s the beauty of Bones. Part of it is absolutely real. We start with reality and we deviate from there. Because we are really about relationships and humor all within the forensic context, we do take some liberties in terms of our technology, in terms of our scripts. It’s a smart humor. This particular script, as with many of them, has layers, and clues are in the anatomical structure — it’s almost like a metaphor. So our clues may range from the anatomy of an entire organism, to an organ level, to a tissue level, to a molecular or cell level. The clues will sort of follow it in that way. We never know in a Rube Goldberg-esque sort of way what’s going to lead to the next thing. This particular script, some very unexpected things happen in the lab. But I don’t think I should tell you and ruin the surprise. It did entail some stretch of reality.

Wired.com: Speaking of real, where do the bones and organs come from?

Cline: It’s very, very unusual that we have any real organic thing aboard. It’s latex and they’re made by our makeup department. Emily’s very big on animals, as we all are.

Wired.com: What’s something that was in an episode that really stretched plausibility?

Cline: One time we found a body that was found head-to-toe in a circle, almost upright. I kept asking, “Why?! What does this mean?” It was skeletal and found in an industrial setting. The only possible explanation was that they had been murdered and posed. But it was never explained [in the episode] and I love that omission.

Wired.com: Has there ever been an error that made it to air?

Cline: Once in a while a word will slip through that isn’t quite right. It usually doesn’t happen because there are so many eyes and filters on our show. Actually, there was one time, and I don’t know how these words got mixed up, but there was a reference to a fracture of a cerebellum. That’s interesting because that’s part of the brain. It might be wounded, but not fractured. But when you consider the thousands and thousands of details that we deal with, and sometimes hundreds every episode, I think our track record is pretty good.

Read 6151 times
Published in News Technologique-Tech News
More in this category: « Six Lessons I Learned From Bombing Iran A Google-a-Day Puzzle for Thursday, Nov. 10 »
back to top