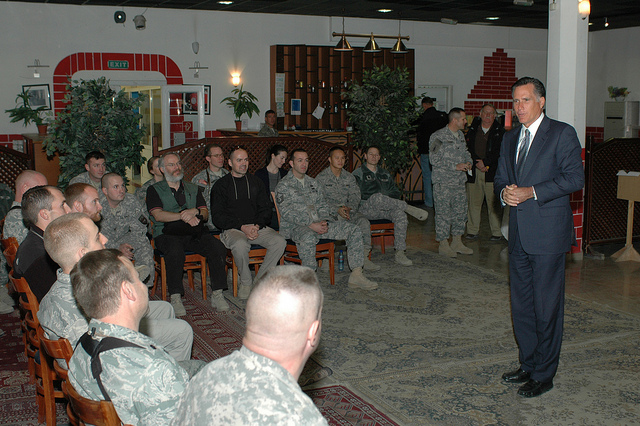 Mitt Romney wants to show the world he’ll be tougher on Iran than President Obama. Only he picked an odd way to go about it. Romney apparently backed away from a previous and seemingly firm commitment to “take military action” to stop Tehran’s nuclear program. Now, he says he’ll merely “back up American diplomacy with a very real and very credible military option.”

Writing in the Wall Street Journal, the inevitable Republican nominee (let’s be honest) offered a glimpse at his own strategy for stopping what looks more and more like an Iranian nuclear weapons effort. Romney vows to “restore the regular presence of aircraft carrier groups in the Mediterranean and the Persian Gulf region.” He says he will increase military aid to Israel, throw in his lot with Iranian dissidents, put new sanctions on Iran, all to “send an unequivocal signal” that the U.S. won’t permit Iran to go nuclear.

That’s short of proposing to bomb Iran — something his adviser Eric Edelman, a former Pentagon policy chief, advocates. It also appears to be a bit of a step back from the last time Romney ran for president, when he backed anti-Iran measures “from blockade to bombardment.” In 2007, he said, “If for some reasons [the Iranians] continue down their course of folly toward nuclear ambition, then I would take military action if that’s available to us.”

Obviously, there’s some wiggle room in that statement. (Who knows what a “course of folly” looks like, or whether or not a military strike is “available?”) Still, it’s a sizable shift from 2007 to 2011. Instead of committing (however loosely) to military action, Romney will now merely threaten Iran.

Why the relative dovishness from Mitt 2.0? Perhaps it’s because he’s closer to the presidency than he was during the last election cycle; would-be occupants of the Oval Office need to be more careful in their foreign policy pronouncements. Perhaps it’s that an aggressive, expansive, interventionist approach to global affairs isn’t quite as popular in today’s Republican base as it was in yesterday’s.

Either way, it’s part of a larger pivot that Romney has made — away from neoconservatism, and towards something more reserved. Back in 2007, Romney proposed a wide-ranging “Marshall Plan” to wholly reshape the Middle East. His current Mideast policy embraces the Arab Spring revolutionaries, but don’t go as far in terms of U.S. economic aid.

In 2007, Romney was full-throated in his support of more troops in Iraq. Today, there’s “public evidence of ambivalence” about the war in Afghanistan, as Eli Lake observed in The New Republic. “One lesson we’ve learned in Afghanistan is that Americans cannot fight another nation’s war of independence,” Romney said in a June debate.

In his Journal op-ed, Romney, who recently pushed for a radical expansion of the American Navy, doesn’t explain how adding U.S. aircraft carriers to the Gulf will actually stop Iran from going nuclear. “Only when the ayatollahs no longer have doubts about America’s resolve will they abandon their nuclear ambitions,” he writes. Except that Iran is way paranoid about a hostile U.S. already, and it’s not curbed the mullahs’ nuclear ambitions.

The rest of the op-ed is a case against Obama’s Iran policy. Obama was wrong to propose direct diplomacy with Iran. He was wrong not to loudly stick up for the 2009 Iranian dissident “Green Revolution” movement (as Obama did for later democracy movements in the region). He was wrong to impose merely weak sanctions on the Iranian regime. He was wrong to pursue a diplomatic rapprochement with Moscow, to boot. All this “White House fecklessness,” Romney writes, has “conveyed an image of American weakness.”

Maybe. But if not for the so-called Russia Reset, President Romney might inherit an Iran armed with one of the most powerful anti-aircraft systems in the world, a scheduled arms sale Obama (and the Israelis) nixed. If President Romney backed the Greens, the mullahs might have painted them as U.S. stooges, or triggered Iranian attacks on U.S. troops in Iraq and Afghanistan. Romney might also specify which harsher sanctions he’d impose — while explaining how they’d pass without Russian help. (International sanctions are tougher than the ones the U.S. imposes on its own.)

None of this is to say Obama’s Iran policy is working. Most importantly, Iran may indeed go nuclear on his watch, after Obama argued in 2008 that a dovish approach would yield geopolitical dividends. Even Obama’s own defense secretary and former CIA director doesn’t think sanctions will stop the Iranians. If there’s a logic to which Mideast dissident movements Obama will scorn and which he’ll wage wars to support, that logic has not be made apparent to anyone outside the White House. Eighteen months after Obama kept largely silent about the protests rocking the U.S.’ biggest enemy in the region, he spoke up loudly in support of the movement which overthrew one of America’s longest-standing friends, Egyptian president Hosni Mubarak. If that’s Romney’s criticism, it’s fair.

But if Romney’s problem is with Obama’s dovishness, it’s odd that Romney 2.0 is more dovish than Romney 1.0. All of which raises the question of what Romney 3.0 — President Romney, that is — would actually do about Iran.