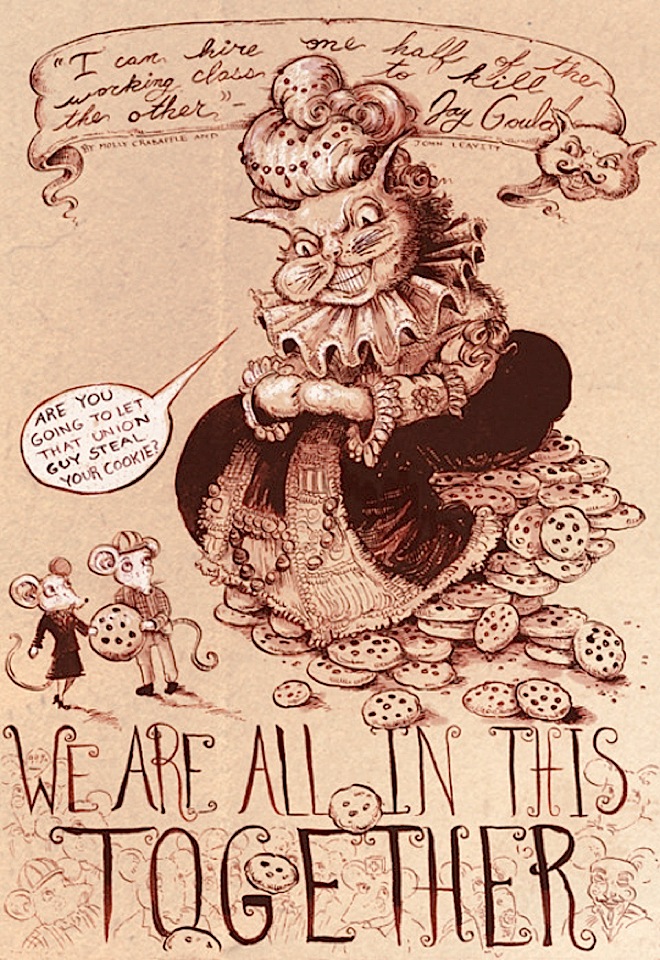 Molly Crabapple and John Leavitt's We're All in This Together satirizes the 1 percent's calculated sabotage of the 99 percent in Occupy Comics limited-edition anthology, due in mid-2012.

What do we want? Funding! How will we get it? Comics!

That’s the goal of the Occupy Comics Kickstarter project, launched Wednesday by transmedia studio Halo-8 and explained in the video pitch below. The plan is to graphically document the Occupy movement with the help of a roster of respected comics creators and artists, then funnel the proceeds directly to the protesters taking hits and making history for the 99 percent.

“Comics is at the root of this thing,” Halo-8 founder and Occupy Comics organizer Matt Pizzolo said in an e-mail to Wired.com. “Just look at Alan Moore and David Lloyd’s V for Vendetta masks at every protest. A Guy Fawkes mask is now a more iconic image of street protest than a gas mask.”

Occupy Comics contributor Molly Crabapple, whose work can be seen above and below, lives a block from Zuccotti Park, where the Occupy Wall Street movement got its start. She said she visits the site, where hundreds of people have encamped to protest economic inequality, almost daily.

“It’s a beautiful community, almost a mini-city, complete with library, kitchen, free store, coffee, compost and Ben and Jerry’s ice cream scooped out by Ben himself,” Crabapple told Wired.com in an e-mail. “But the media wasn’t portraying this. So I started drawing the protesters to show the diversity down at Zuccotti. Later, I did more blatantly political work in response to attacks on unions and police brutality in Oakland.”

Occupy Comics’ overall plan is pretty simple, which is how Pizzolo wants to keep it, in the interests of transparency. But some workarounds have been needed. “You can’t fund-raise for charity on Kickstarter; you can only use it to fund a creative project,” Pizzolo said. “So Kickstarter itself is funding the creation of a hardcover anthology graphic novel about the protests, and through that everyone is being paid, then donating their pay to the protesters.”

The longer version is that Occupy Comics contributors Steve Niles, Joshua Dysart, Douglas Rushkoff, J.M. DeMatteis and many more are creating art inspired by the protest movement and compiling it into an extensive art book in the tradition of similar releases like Peace Signs: The Anti-War Movement Illustrated and Green Patriot Posters: Images for a New Activism. Artists and execs donate all pay and profits to assist with the occupiers’ amenities and necessities. The revolution is visualized when Occupy Comics‘ limited-edition anthology arrives in mid-2012.

Pizzolo said the project makes sense because the Occupy Wall Street movement was launched by a piece of art.

‘We’re all connected in the cloud now, and you can’t fight that with pepper spray.’

“Adbusters created a really powerful image of a ballerina atop the Wall Street bull with protesters in the background, and that was enough to set this off,” he said. “Then Anonymous brought in the Guy Fawkes masks, and U.S. Day of Rage created more art challenging the relationship between Wall Street and Washington. So this is an art-inspired movement, and that’s part of what makes it so viral. It’s not intellectual, it doesn’t need a manifesto. People are banding together around an idea, rather than an ideology.”

That band is heavily fortified by technology and social networking, which continues to sustain the Occupy movement and increase its support. While the protesters are consumed with everything from corporate personhood to the widening gap between the rich and the poor, they are taking their concerns to Twitter and Facebook as well as the streets, using the internet to mobilize and inform the movement’s ranks.

“During the late-’90s globalization protests, which were about many of the same issues, we had to be brought into a group and trained in protest methodologies,” said Pizzolo. “But when I stepped into Zuccotti Park for the first time, I had all the information I needed just by following Twitter. We’re all connected in the cloud now, and you can’t fight that with pepper spray. This movement is about art and technology connecting people. That’s new, and really exciting.” 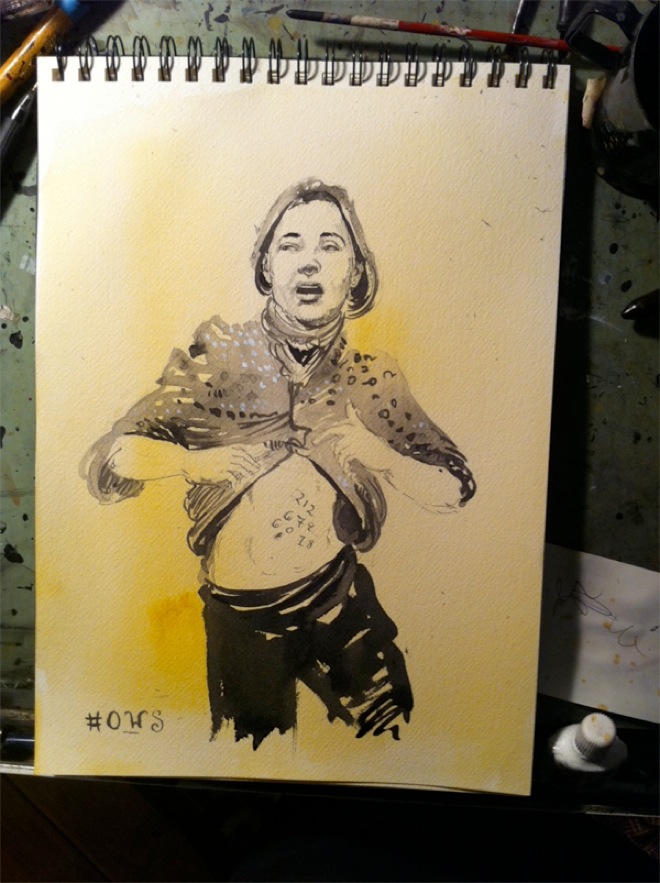 Molly Crabapple's OWS Protestor is one face of many from the movement documented in Occupy Comics.
Images courtesy Halo-8

Read 2894 times
Published in News Technologique-Tech News
More in this category: « NASA's Next Mars Rover to Launch in 15 Days Twitter ajoute l’onglet « Activité » »
back to top