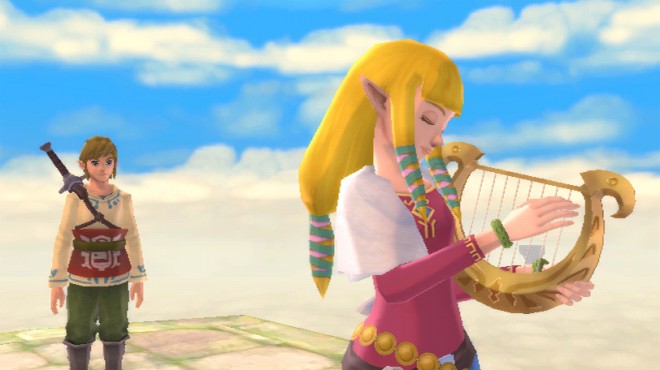 Link and Zelda share a peaceful moment before everything goes pear-shaped and he has to save the world in Zelda: Skyward Sword for Wii.
Image: Nintendo

Have you ever played a game that took forever to come out, only to find yourself wondering, “What the hell were they doing for all this time, anyway?”

The Legend of Zelda: Skyward Sword is not one of those games. It has taken Nintendo five years to release a game in this series developed exclusively for Wii, and it delivers in every way possible including some you wouldn’t necessarily expect. The visual design and music are gorgeous, the gameplay varied and well paced, the script humorous. And there’s a lot of it. As of this writing I’ve lost 30 hours to Skyward Sword and I still have more to do. (Wired.com writer John Mix Meyer has put in 40 hours and he’s just about finished, but not quite.)

To be fair, these sorts of superlatives might describe any Zelda game. What sets Skyward Sword apart is that its designers have truly rethought the Zelda framework, which has not changed much in the 25 years since the release of the first game. The Zelda series is one of the most oddly ritualized in all of gaming; there is a whole laundry list of things a Zelda game simply must have or else its fans would be utterly scandalized. There’s a certain comfort in knowing that every time Link opens a treasure chest, he’s going to hold the item above his head with a smile on his face while we all hum along to the familiar dah-dah-dah-DAH musical cue.

Skyward Sword is not the game to slaughter that particular sacred cow, as ridiculous as it sometimes seems when it’s dropped into an otherwise deeply serious moment in the story. But in creating the first game in the series designed around motion controls, the developers have taken the opportunity to ask themselves: What is truly necessary to make a game feel like Zelda, and what is just excess baggage left over from 25 years of clinging to tradition?

This isn’t the first Zelda to make use of motion controls. 2006’s Twilight Princess, which launched alongside Wii, was a GameCube game that had rudimentary motion controls grafted onto it in the final stages of development. Even as an afterthought, they worked well; the game was a solid proof of concept that showed how motion could be integrated into a richer game experience than the Wii Sports mini-games. But what Wii needed was a game that was designed from the outset to use motion controls. It took Nintendo all of the ensuing five years to finish it, and somewhere along the line it decided that Skyward Sword would require the MotionPlus add-on for more precise controls.

The most immediately obvious way that this affects the new game is in the swordplay. In Twilight Princess, waggling the controller any which way produced the same basic sword strike. In Skyward Sword, your onscreen sword mirrors the position and orientation of your hand, allowing you to slash any which direction or poke your sword forward when a thrust is called for. To power up your blade for a big strike, you hold your Wii Remote above your head. (Shouting “By the power of Grayskull!” when you do this is optional but encouraged.)

You don’t encounter as many enemies in Skyward Sword as in previous games, but each enemy fight is more meaningful since you can’t just hack and slash your way through them without getting your sword at the ready and making precise cuts.