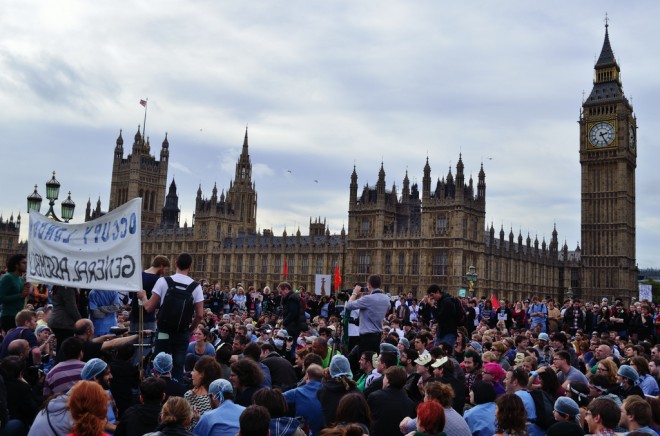 For those wondering what might become of the Occupy movement over time, it might be useful to consider the path of UK Uncut, an activist group in Britain that recently enjoyed its first birthday. And it’s still going strong: On Wednesday, UK Uncut activists infiltrated a business conference in suits and harangued the government’s top tax official during his scheduled speech.

In each of the ways that Occupy is amorphous — the leaderlessness, the consensus-driven organizing process, the lack of specific policy goals — UK Uncut is a shade less so.

UK Uncut’s focus is on protesting government spending cuts, and on pointing out the ways that certain individuals and corporations exploit loopholes or special deals to reduce their tax bills. But that turns out to be a large enough umbrella to let UK Uncut support all sorts of causes — so in addition to organizing its own actions, the group opportunistically supports others it sees as advancing its broadly defined agenda.

In the process, UK Uncut has become a very successful example of a protest organization powered by social media. Largely through its Facebook and Twitter accounts, each of which have around 30,000 followers, the group has carried out a series of paralyzing demonstrations in chain businesses around Britain, protesting the tax deals that their management had cut with the government. In October, the group organized a mammoth 2,000-person sit-in on Westminster Bridge [https://www.guardian.co.uk/uk/2011/oct/09/anti-nhs-reforms-protest-block-bridge] in early August, after the government threatened to reduce the budget of the National Health Service.

Not long ago, at a coffee shop just off London’s Oxford Street, I met up with “Tim Matthews” — the first name is real, he claims, but not the last — one of the group’s organizers. We met near one of the group’s recent targets: the Oxford Street flagship store of clothing retailer Topshop, whose owner, Sir Philip Green, lives in Britain but registers his businesses in his family’s name at a Monaco address. Bill Wasik is a senior editor at Wired and the author of And Then There's This: How Stories Live and Die in Viral Culture.
Follow @BillWasik and @ThreatLevel on Twitter.

Read 2648 times
Published in News Technologique-Tech News
More in this category: « Burt Rutan Is Up To Something... Dissed by Logitech, Google TV Soldiers On »
back to top